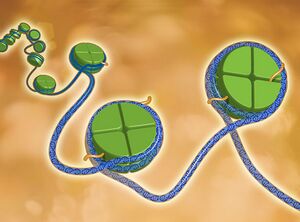 Image 1: Epigenetics modifications influence when and how often a gene is active

Epigenetics affect which genes are expressed, and subsequently whether the cells should produce relevant proteins, e.g. determining a cell’s specialisation such as skin cell, blood cell, hair cell, liver cells, etc. These effects play a role both as a foetus develops through gene expression (active) or repression (dormant), and also through nurture with environmental stimuli having the ability to cause genes to be turned off or turned on.[2] The different combinations of genes that are turned on or off is what makes each one of us unique. For example, if we have brown or black hair, how sociable you are, how an oyster tastes to us. Additionally, there are indications that some epigenetic changes can be inherited.[2]

Image 1: Epigenetics describes modifications to the genome that can be passed on to future cells.These changes do not alter the nucleotide sequence of the DNA-the As, Gs, Ts, and Cs that make up our genes. Rather, they modify the "backbone" that supports the DNA sequence. These modifications influence when and how often a gene is active. 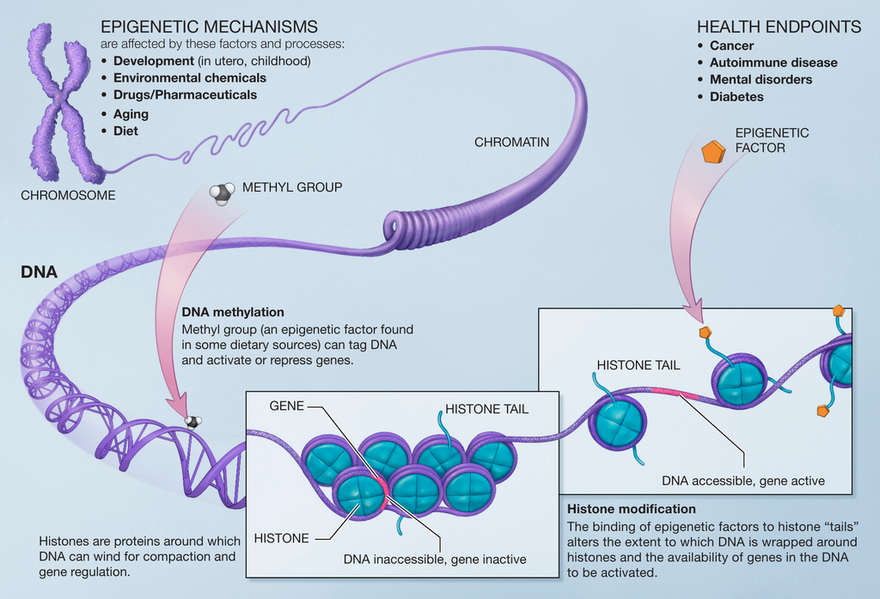 Epigenetic mechanisms are affected by several factors and processes including development in utero and in childhood, environmental chemicals, drugs and pharmaceuticals, ageing, and diet. DNA methylation is what occurs when methyl groups, an epigenetic factor found in some dietary sources, can tag DNA and activate or repress genes. Histones are proteins around which DNA can wind for compaction and gene regulation. Histone modification occurs when the binding of epigenetic factors to histone “tails” alters the extent to which DNA is wrapped around histones and the availability of genes in the DNA to be activated. All of these factors and processes can have an effect on people’s health and influence their health possibly resulting in cancer, autoimmune disease, mental disorders, or diabetes among other illnesses. 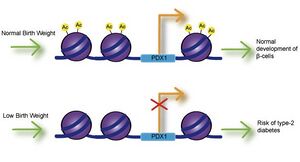 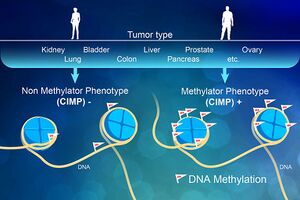 Epigenetics began over 60 years ago. During the 1970s it started becoming more prominent with the arrival of molecular biology and during the last 10–15 years, has emerged as a stand-alone discipline complementary to genetics. [4]

Image 4: PDX1 is an essential transcription factor for proper development and function of pancreatic beta cells. Poor maternal nutrition is linked to intrauterine growth restriction (IUGR) and low birth weight, and can result in decreased expression of PDX1 through decreased histone acetylation at the PDX1 proximal promoter. Reduced expression of PDX1 may result in improper formation of beta cells and increase the risk of type-2 diabetes in the offspring

Image 5: In every cell, DNA is tagged with chemical groups-like flags on the DNA-that make up the epigenetic code and act as guideposts. These flags help the cell's machinery know when to activate or inactivate a gene. In healthy cells, these flags are correctly placed and genes are expressed in the right proportions. However, in many tumor cells the flags are incorrectly applied. One form of incorrect DNA flagging occurs when extreme amounts of otherwise healthy methyl chemical groups, which act like on/off switches for a gene, are incorrectly added to many places on the cell's DNA. Instead of a cell chugging along with its natural, biological jobs, these newly added methyl groups cause the cell to act erratically, leading to the cell expressing genes at the wrong levels, or not at all. This generally disrupts the normal flow of information in the cell. Importantly, these flags can turn off key defensive genes that help protect the cell from becoming cancerous and disrupt other processes. When this occurs, it's called "CpG Island Methylation Phenotype," or CIMP for short.

For a brief explanation watch this 5 minute video. 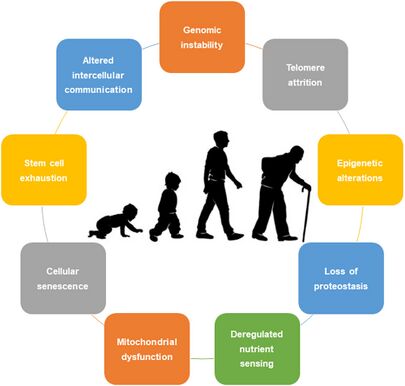 It is now established that exercise is an important “medicine”. Examples of the role exercise can play in epigenetics include:

As people age, the most significant influence on the epigenome is the environment. These include diet, smoking, physical activity and psychological stress[1].

The field of nutriepigenomics looks into how food and epigenetics work together to influence health and wellbeing. eg studies have found that certain compounds within the foods we consume could protect again cancer by adjusting methyl marks on oncogenes or tumor suppressor genes[2].