Bronchiectasis is an obstructive lung disease that results from the presence of chronic inflammatory secretions and microbes leading to the permanent dilation and distortion of airway walls, as well as recurrent infection [1]. It is associated with frequent acute exacerbations, which are an independent predictor of progressive decline in respiratory function and a poorer prognosis[2] 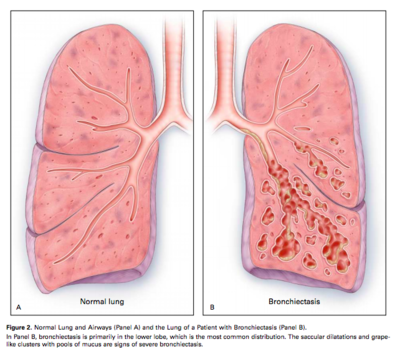 Bronchiectasis is chronic irreversible dilation of the bronchi on the lungs. It follows a severe lung infection or aspiration. It is more common in conditions such as Cystic Fibrosis, Rheumatoid Arthritis, Immunodeficiency, Young's syndrome and Allergic Bronchopulmonary Aspergillosis, and after childhood diseases such as whooping cough, TB and measles. Bronchiectasis that is not associated with Cystic Fibrosis is known as non-CF Brochiectasis[2] 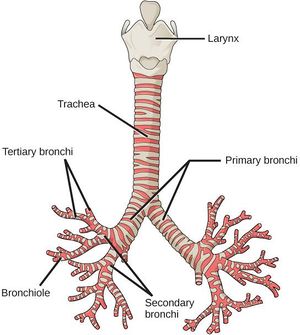 Bronchiectasis involves inflammation of the airway walls, specifically the bronchial walls [4]. The airway walls are the ‘tubes’ that run from the mouth and nose and travel to the lung. The main area that is affected in bronchiectasis is the bronchi [4]. The trachea bifurcates into the right and left main bronchi, which then further divide into secondary bronchi; one for each lobe of the lung [5]. They then divide into tertiary bronchi; one for each bronchopulmonary segment [5]. For more detailed anatomy see Lung Anatomy

The cilia are also damaged in bronchiectasis. Cilia line the airway and are attached to the epithelium. They are hair-like with tiny hooks on the tip to grab the mucous and help move the mucus up to the throat [4].

It is underestimated in prevalence, incidence, and morbidity because symptoms are often ascribed to smoking. A study by Hill [6]found that one in 1000 people in the UK have bronchiectasis, with associated deaths increasing at a rate of approximately 3% per year in England and Wales [7]. Though the overall mortality rate is increasing in these countries, rates in older groups are rising whereas rates in younger groups are falling  [7]. A disproportionate amount of cases found in developing countries and in Aboriginal populations in affluent communities [8]. In some populations, an improvement in socio-economic status, housing, and education can improve overall health and reduce the incidence of respiratory infection and development of bronchiectasis [8].

The cause is unknown for 50% of cases, but it has been linked to inflammatory bowel disease, rheumatoid arthritis, and in 29-50% of patients, COPD [9]. There are several associated conditions with bronchiectasis including; cystic fibrosis, primary ciliary dyskinesia, lung tuberculosis, allergic bronchopulmonary aspergillosis, rheumatoid diseases, symptomatic lupus erythematosus, immune deficiency, severe childhood respiratory infection and exposure to a foreign body or corrosive substance [4]. It has also been linked to an x1-antitrypsin deficiency [4]. Bronchiectasis tends to predispose patients to acquired and congenital lung infections [4].

The process begins with inflammatory damage to the bronchial walls, which then stimulates the formation of excess thick mucus [4]. The warm and moist environment of the lungs combines with the mucus to cause further inflammation and obstruction, creating an excellent environment for infection [4]. The thick mucus crushes the cilia and causes further damage. The immune response releases toxic inflammatory chemicals (i.e. neutrophils), as well as leads to fibrosis and bronchospasm if persistent[4].

Currently, a high-resolution CT scan is the gold standard for diagnosing bronchiectasis [4]. Parallel tramlines and ring shadows may be present on the scan, indicating thickened airway walls and dilated airways, respectively[4]. There may also be ‘glove finger shadows’, which are finger-like projections that represent the dilated bronchi filled with solidified secretions[4].
Spirometry will simply identify if there is an airway obstruction, but this can be indicative of many other diseases[4].
Microbiology can also be used to identify the bacteria present during an exacerbation [4]. A sputum sample is sent off and the results are returned with the incidence of bacterial colonization measured [4].

As delicate cilia are often damaged due to the presence of thick mucus, the voluminous quantities of sputum formed cannot be efficiently cleared[4]. These secretions will lead to the production of wheezes, coarse crackles and squeaks on auscultation. Often times, patients will also present with muscular dysfunction due to inflammation, gas exchange abnormalities, inactivity, malnutrition, hypoxia and medications [10]. Dyspnoea on exertion seems to be a major clinical manifestation as it is experienced by three out of four patients. Other physical manifestations include chest pain, snoring, finger clubbing, fatigue, persistent cough, recurrent infection, and loss of appetite[4]. Stress incontinence can also be a result of excess coughing. Bronchiectasis tends to also have psychological manifestations, such as anxiety, depression, reduced confidence, altered relationships and time off work[4].
Exacerbations can occur several times a year and are identified by four or more of the following signs and/or symptoms: change in sputum, increased dyspnoea, increased cough, fever of greater than 38°, increased wheeze, decreased exercise tolerance, fatigue, lethargy, and radiographic signs of a new infection[4].

Physiotherapy and Other Management

The key to the management of bronchiectasis is through education and systemic management. Currently, antibiotics are used at the first sign of change in sputum colour[4] and longterm use of antibiotics is recommended for people who experience 3 or more exacerbations a year[11]. Since antibiotics do not help with the persistent inflammation in the airways, inhaled steroids are taken as an anti-inflammatory and to decrease sputum production[4]. Brochodilators tend to help patients who also have co-existing COPD and asthma[11]. A review and a controlled study found that many people with bronchiectasis also have a Vitamin D deficiency and prescribing Vitamin D may have an anti-inflammatory and anti-infective role[12][13].

Physiotherapy has a very valuable role in aiding with symptoms of bronchiectasis. Since mucociliary clearance is reduced to about 15% of normal, patients tend to cough more[4]. Physiotherapy treatments are aimed at aiding secretion clearance, managing fatigue induced by the effort of ineffective clearance and increased coughing. The most common and effective treatments are:

(ACBT) is a commonly taught technique and is often used with Postural drainage and manual drainage[14]. Its purpose is to loosen and clear excess pulmonary secretions, improve the effectiveness of a cough and to improve lung ventilation and function. It consists of 3 main stages:

Studies suggest better results with a combination of Bubble PEP Device and ACBT in sputum clearance with these patients[23].

High-Frequency Chest Wall Oscillation is achieved by wearing a vest that emulates chest physiotherapy. The vest applies positive pressure air pulses to the chest which causes vibrations that loosen and thin mucus, This along with an intermittent cough or huff assists with the clearance of secretions. This device allows people to perform therapy in their own time, allowing them some control and less dependence on other people.

Intrapulmonary Percussive Ventilation is another technique that relies on a device to assist with the clearance of secretions. An intrapulmonary percussive ventilator (IPV) is a machine that delivers short bursts of air through a mouthpiece that vibrates the airway walls[24]. It is indicated for short-term use when other techniques are contraindicated or have proved ineffective.

Intermittent Positive Pressure Breathing (IPPB), is an expensive piece of equipment[25] and usually only used when all other clearance techniques have proved to be ineffective[11]. It is commonly seen in Intensive Care and gives positive pressure as the patient breathes in, and during expiration it creates negative pressure making the cough stronger and more effective

Physical Exercise is recommended for respiratory conditions, including bronchiectasis with the aim of improving aerobic capacity and, fitness and endurance. A study by Lee et al concluded that exercise resulted in short term improvements and had an impact on dyspnoea and fatigue, and resulted in fewer exacerbations over a 12 month period[26].

In order to assess the effectiveness of treatment and changes in quality of life, there are several outcome measures available: