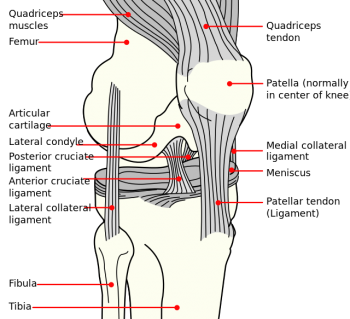 The anterior cruciate ligament (ACL) is important for maintaining stability of the knee joint, particularly in activities involving weaving, pivoting or kicking. The knee becomes unstable with a ruptured ACL and the joint may become more damaged over time. ACL reconstruction is the surgical treatment of choice to restore stability at the knee joint.

Non operative treatment is preferred when the patient:

Operative treatment is preferred when the patient:

The majority of patients fall between these two sets of criteria, therefore treatment should always be assessed on an individual basis.

The goals of reconstructive surgery are to restore stability and to maintain full active ROM. The functional stability provided by the normal ACL is both in resisting anteroposterior translation as well as rotational subluxation.

Reconstruction techniques vary as do the graft materials which can be used. The option of surgical management can vary depending on the patient's symptoms and their level and type of activity. i.e. if their sport involves rotating movements. Conservative management is an option, but the long term prognosis isn't as favourable [2].

There is no gold standard for ACL reconstruction. Each surgeon has a different technique and preference. More recent techniques are showing outcomes that are still inconclusive for long term results [3]. Different techniques include arthroscopic vs open surgery, intra vs extra-articular reconstruction, femoral tunnel placement, number of graft strands, single vs double bundle and fixation methods. [3] Extra-articular reconstruction has been used to address pivotal shift which has been shown to have greater effects than that provided by intra-articular reconstruction, but lacks residual stability. Intra-articular became the method of choice, but it doesn't restore the normal knee kinematics. Double bundle is considered more anatomical and supportive especially during rotary loading. It is able to reproduce anteriomedial and posteriolateral bundles using gracilis and semitendonosis tendons. The single bundle method (of the AM portion) is reported to have rotator instability in the longer term.[4] In order to achieve long term stability, it is essential that all ligaments and capsular restraints are isometric within a full ROM.[5] The isometric function of the ACL is achieved by the configuration of its 2 fibre bundles, (anteriomedial and posteriolateral) and their attachments.[6] The ACL is not a single cord and has bundles of individual fibres which assume spiral configuration and fan out over broad attachment areas. Due to its complex structure, ligament attachment sites should not be altered during reconstruction.[7].

There are two different techniques used for ACL reconstruction: 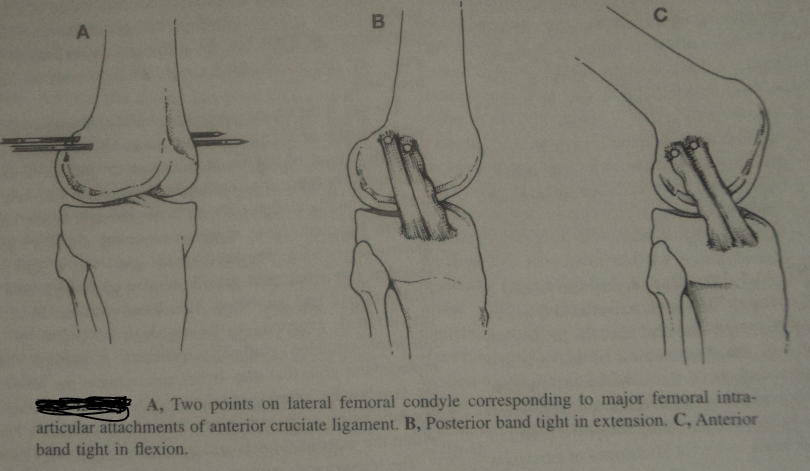 Various tissues/grafts have been used to anatomically reconstruct the torn ACL which include portions of the extensor mechanism [10][11], patellar tendon, iliotibial tract [12][13], semitendinousus tendon[14][15], gracilis tendon[16] and menisci[17]. These can all be used in autografts i.e grafts taken from the person undergoing surgery. Other methods include the use of allografts and synthetic ligaments.[18][19]. This procedure has the following steps: 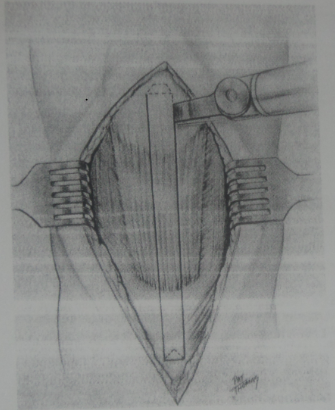 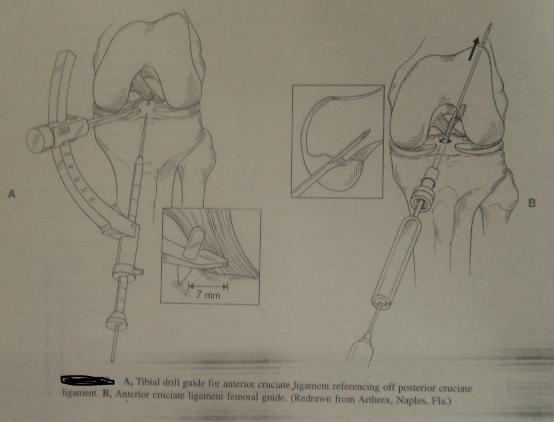 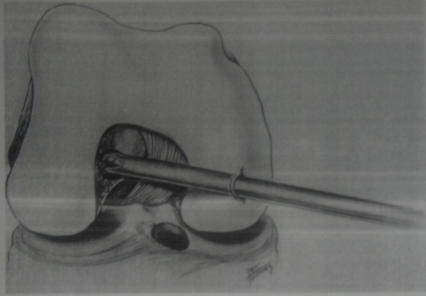 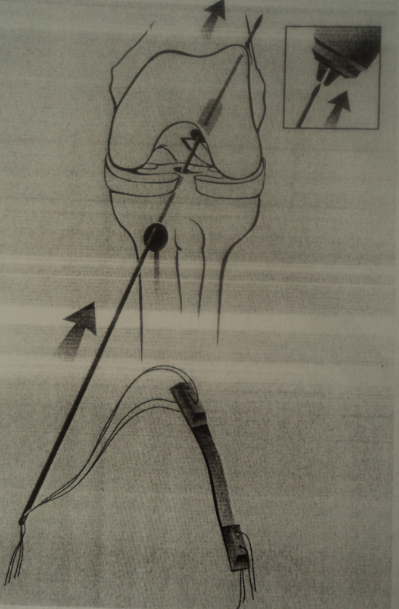 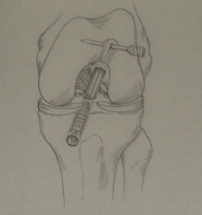 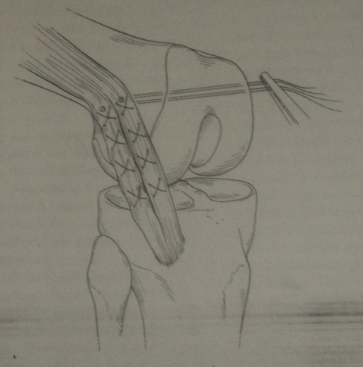 The most common procedures for this reconstruction:

Other procedures are the LARS artificial ligament (Ligament Advanced Reinforcement System), iliotibial tract allografts, cadaveric allografts, synthetic materials and grafts from living related donor people, but all materials have their drawbacks. There is the potential for cross infections, breakage, immunological responses, chronic effusions and recurrent instability[20]

On the contrary, anterior translation after double bundle reconstruction was comparable with the intact ACL at 0° flexion, but the most stable position of the knee is at 15° and 75° flexion.

Anatomy of the femoral and the tibial tunnel:

The tunnel at the sagittal side of the knee runs to the cortex of the femur and the roof of the intercondylar notch.

Various tissues/graft have been used to anatomically reconstruct the torn ACL.

There are 4 types of grafts:

The most commonly used are the autografts (patellar bone & hamstring) and sometimes the allografts. There is no consensus in the literature as to which provides the most stability. [35] Each of these choices has advantages and disadvantages.

With the improvement in the technique of the preparation of the multiple bundle graft, this graft choice has become more popular.

Allograft is most commonly used in lower demand patients, or patients who are undergoing revision ACL surgery. Biomechanical studies show that allograft (donor tissue from a cadaver) is not as strong as a patient's own tissue (autograft). For many patients, however, the strength of the reconstructed ACL using an allograft is sufficient for their demands. Therefore this may be an excellent option for patients not planning to participate in high demand sports such as football, basketball, etc.

Successful anterior cruciate ligament reconstruction is dependent on a number of factors including: patient selection, surgical technique, postoperative rehabilitation, and associated secondary restraint ligamentous instability. Errors in graft selection, tunnel placement, tensioning, or fixation methods chosen may also lead to graft failure. The comparison studies in the literature show that the outcome is similar regardless of the graft choice. The most important aspect of the operation is tunnel placement and the choice of graft is incidental.[38]

A Cochrane review in 2011[39] described the following:

A more recent study concluded that "ipsilateral autograft continues to show excellent results in terms of patient satisfaction, symptoms, function, activity level, and stability. The use of HT autograft does, however, show better outcomes than the PT autograft in all of these outcome measures. Additionally, at 15 years, the HT graft reconstructed ACLs have shown a lower rate of radiological osteoarthritis [40].