The rooting reflex is an innate response of the head due to the stimulation of the face, mouth, or cheek by touching/stroking (the head is turned towards the side of the stimulus).[1] It is a brainstem mediated primitive motor reflex also called the frontal release reflex.

This reflex has also been observed in the apes and other mammals.[1]

The presence of the Rooting reflex has also been linked to altriciality-meaning that the newborns are unable to feed themselves (unable to source for food) with the help of locomotion. Therefore in response, the caregiver feeds the young one taking the reflex as a cue.[2]

The reflex commences when the corner of an infant’s mouth is stimulated by touching/stroking. [3]

The newborn will turn their head towards the stimulus(finger or nipple) and open the mouth wide with tongue thrusting (tongue sits too forward in the mouth).[3] 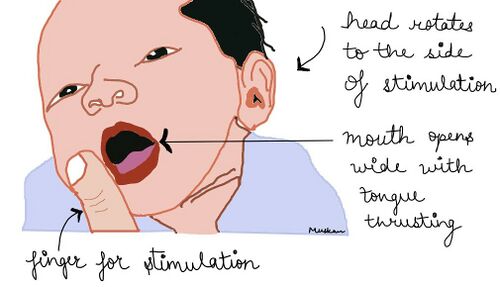 The rooting reflex is present at birth (around 28 weeks of gestation) and disintegrates about 4 to 6 months (until the frontal lobe of the cerebral cortex matures.)[3]