From birth, infants use their hands to gather information about their bodies and surrounding surfaces. Spontaneous self-generated movements of their arms and legs provide contact with their environment. These spontaneous movements "provide a foundation for exploratory behavior from which body representation and a basic, implicit form of self-knowledge build".[1] As their motor skills increase, infants can begin to reach and grasp objects in a variety of ways.[2] This reaching motion enables an infant to bring their hands to a target while the grasping movement provides their hands with the opportunity to manipulate a toy or object.[3]

Newborns intuitively grasp objects that are placed in their hands, but not distant objects. At around 4 months old, infants can begin to reach for distant targets. At 12 months, an infant can use their arms to facilitate a "reach-to-grasp" that closely resembles an adult.[4] 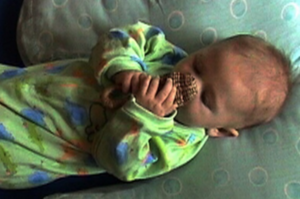 In addition to manipulating toys, infants aged 0-7 months use their hands for other purposes as well. Hand use during this stage can have the following objectives:[5]

Between 0 and 7 months, each step of hand development augments the next stage. From birth to 6-8 weeks, most hand movements are spontaneous in nature (see below). At 2-6 months old, exploratory hand actions, driven by curiosity, are supported by visual attention. At 6-8 months, infants can manipulate and grasp objects to make things happen. This is the first stage of goal-directed hand actions.[5] 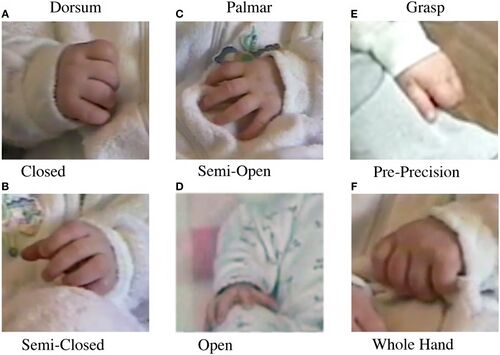 Types of hand positioning for self-touch.

From 0-24 weeks, self-touching exploration teaches infants about their face, body and surrounding surfaces.[5] Self-touching helps the infant gather information about the extremity that is making contact with the body and where that extremity is in space.[1] In their earlier weeks (up to 8 weeks), infants initially touch with their fists on the dorsum of their hands. Eventually (8-12 weeks) the fist transitions into a semi-closed position with contact on the side of the hand and back of the fingers. Contact with the hands during this early period are brief. As infants move into the 8-12 week period, contact time and exploration are increased, and finger manipulation begins. From 12-24 weeks, touch is more complex and the contact point is the palmar aspect of the hand. During this stage, infants can rotate their hands to explore objects.[5] 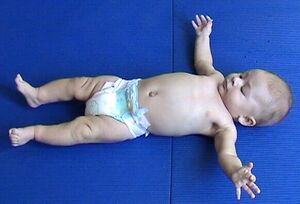 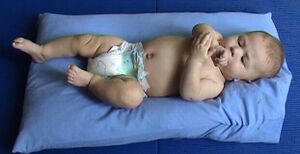 Different support surfaces can affect spontaneous movements of the limbs. On hard, firm surfaces, an infant in supine tends to place their lower extremities in extension and their upper extremities in abduction with elbow extension. This position on a hard surface results in less kicking and spontaneous movement. In contrast, an infant in supine on a soft surface tends to adopt a more flexed position of the lower extremities and the upper extremities are brought to the midline near the mouth. In this flexed position, the hands are open and are freely able to move to touch each other and the body.[5]

** Preterm and infants with developmental delay have less spontaneous movements[7] 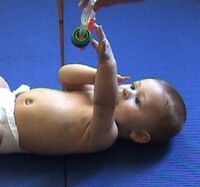 At 3-4 months, infants will intentionally reach for objects, especially when they are introduced at the midline. At around 10 weeks old, infants can bring their hands to the midline. Some of the characteristics of intentional reaching during this stage are listed below:

Intentional reach and grasp during the 5-6 month stage is characterised by the following: