Infant motor behaviour relies on perception or taking in and organising sensory information and feedback from prior movement patterns or experiences. Learning new motor skills affords infants new opportunities to interact with caregivers and their environment.  Infant socialization with their caregiver and environment shapes their developmental path by affecting the learning of new skills and when those skills will appear.[1]

Newborn general movements are described as writhing until about 2 months old.  Voluntary, goal-directed functional movements replace spontaneous movement around 3 months old.  Between 3-5 months old, infants will begin to reach out for objects.[2] 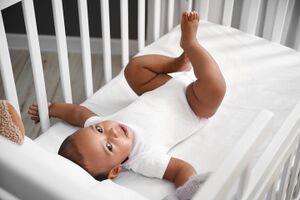 Newborns lower limb posture assumes a flexed posture.  The hip and knee flexors present with increased tone due to the tight space in utero.  Restriction in hip extension is referred to a hip flexion contracture. Upper limb posture for newborns is slight external rotation, elbow flexion with the hands slightly open.  Spontaneous movements of the arm bring the hand into contact with the face. [3]

Muscle synergies, the activation of muscle groups, are the basis for newborn motor control. As infants age and become toddlers and then adults, muscle synergies increase and become more complex. [4] Productive movement implementation can be achieved by combining muscle synergies. [5] Research shows that muscle synergies are innate, however, acquiring new tasks may demand fine-tuning of the early synergies.[6] The speaker described infant upper and lower limb synergies as follows:

Good postural control enables infants to perform a range of tasks that serve a function in motor development.[7] Movement of the extremities follows sufficient postural control.[1] Varying postures facilitate or reduce physical interactions with objects, caregivers and the environment.[1] [8] When infants are prone, one hand is needed to lift the torso, leaving only one hand to manipulate objects.[1]  Having to focus on balance will limit object manipulations.[8]   Contrastingly, in sitting the infant is free to use both hands to explore and play increasing possibilities of action.[1]  Continuous trial and error learning exploration increases the infant’s ability to choose the best motor strategies.[9] Due to visual and social benefits, infants have a preference for upright postures.[9] As infants age and with increased experiences, more adaptive postural responses emerge.  One study demonstrated that even 3-5 month olds can perform a task-specific standing by adjusting their posture.  The participants in this study stood with a stiff posture which is a common theme when learning a new motor skill. With continued trial and error, freezing posture is replaced by more flexibility which in turn increases postural control. [9]

During the first year of life, postural stability develops rapidly as infants learn to control their head and trunk.[10]  Controlling the head is a precursor for more advanced motor development.  Newborns have limited control of their head.  In supine, they can maintain their head in midline when observing a visual event, but tend to turn the head to one side when at rest. [3]  In prone, newborns can briefly lift their head against gravity.  During the second month of life, infants can hold their head up in prone and in supported sitting.[3]  Between 3-4 months of age, infants can stabilize their head using visual information to reach and grasp[11]The video below by Pediatric Physical Therapy Exercises demonstrates head control in an infant.

Moving eyes in the direction of a target is referred to as visual perception. Pointing eyes to a specific location involves coordinating body, head and eyes to the target. Newborns who lack head control can only view whatever is in their line of vision.  Young infants track larger targets that move in predictable ways.  Smaller and faster targets can be tracked once the infant has had many months of practice.[1]

Imitating the action of others is a powerful learning tool for infants.[12] [11] Through imitation of behavior, postures, vocalizations and action on objects they acquire new knowledge[12]   Cause and effect, properties of objects and the actions of others are all learning skills infants gain through imitation.  As they imitate others, they learn about themselves, their abilities, similarities to others and their own characteristics.  Research show that who, what, when is imitated is chosen by the infant in a deliberate and selective manner. In addition, infants choose trustworthy and friendly model to imitate. Studies show when infant will less likely imitate a behaviour when a negative emotion is linked to it. [11] Very shortly after birth, infants will imitate adult behavior.  The speaker mentioned some of the following way infants mimic others: mouth opening, tongue protruding, sequential finger movements and head turning.[3]The video below by Lund University demonstrates how babies mimic others.

Good postural support enables infants to interact within their environment by reaching and grasping.[1] [13] Reaching supersedes grasping.[13] Initially, reaching movements are jerky infants may overshoot or undershoot the target. A 3-month-old will typically bat at objects because they do not have the hand control necessary for grasping.  When infants begin using their hands to grasp, they tend to bring the object to their face for mouthing or looking.  Manual grasping skills advance to squeezing, rotating and transferring objects from hand to hand.[1] Reaching and grasping objects afford for new social interaction with the infant and caregiver.[13] The following video by Pathways.org details typical and nontypical motor skills in a 2 month old.