The end feel is a type of sensation or feeling which the examiner experienced when the joint is at the end of its available passive range of motion.

The end of each motion at each joint is limited from further movement by particular anatomical structures.The type of structure that limits a joint has a characteristic feel,which may be detected by the therapist performing the passive ROM.This feeling,which is experienced by the therapist as resistance,or a barrier to further motion,is called the end-feel[1]

An appropriate assessment of end feel can support the examiner

The most widely recognized classification developed by Cyriax, Kaltenborn, and Paris[2][1] have described a variety of normal (physiological) and the abnormal (pathological) end feels. 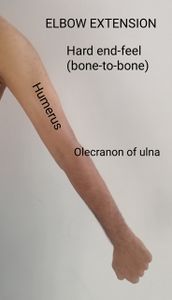 Building up the capacity to decide the kind  of end feel takes practice and sensitivity.[edit | edit source]