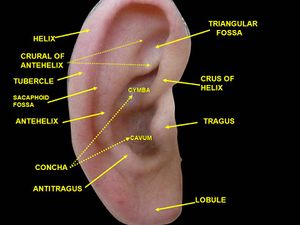 To objectively measure the cervical mobility of an individual.

A 2018 review of the Tragus to Wall Test (TWT) noted it is a simple, reliable and valid, clinical indicator of forward flexed posture[1].

For individuals with a flexed head and neck posture, particularly the elderly and those who have Parkinson's Disease or Ankylosing Spondylitis (Axial Spondyloarthritis) (AS).

Shipe et al (2013) describe the measuring the tragus to wall distance (TWD) as: “the horizontal distance between the tragus, the auricular cartilaginous flap anterior to the external auditory meatus, and a wall.”[2]

The measurement can be done standing or sitting and it is worth documenting which position has been used.

The TWD can be measured on both the individual’s right and left, and then an average can be calculated.

In AS, test-retest correlations have been reported at between 0.93 and 0.95[4]. Inter-tester reliability has also been reported as “excellent” in individuals with PD[5].

However, in individuals aged 18-34 without pathology, Shipe et al [2]observed variable inter-rater reliability results but found that intra-rater reliability was high. The authors subsequently recommended that in clinical practice, the TWT be repeated by the same person.

In PD, the TWD has shown convergent validity with similar measures (occiput to wall status, C7 to wall distance, photographically derived trunk flexion angle, and inclinometric Thoracic Hyperkyphosis measure)[5]. It has also shown the ability to discriminate between groups (those who could touch occiput to wall when prompted to stand tall) and conditions (cued or relaxed)[5].

Research reports limited evidence for responsiveness of the TWT[1]. One study[3] reported small to moderate responsiveness to improvement but not deterioration in TWD.

The TWT is one measurement in a separate outcome measure, the Bath Ankylosing Spondylitis Metrology Index (BASMI)[6]. As part of a study to produce normative data for the BASMI[7], it was found that TWD did not deteriorate with age[6] . Results from the study showed the TWD was consistent across age groups and gender, which the authors noted was similar to a previous study of normative data using a seated TWT[8]. The authors concluded that TWD is instead disease-specific, in relation to AS.

The TWD may be affected by body mass and weight loss or gain between measurements[9].