Therapeutic modalities are commonly used by physiotherapists to help their patients/clients achieve therapy goals.[1] Electrophysical agents are used to create physiological effects, and these electrotherapy modalities has been making part of the physiotherapy-used modalities for decades.[2] The choice of which modality to use may depend on a specific condition, patient's needs and goals. This page will look at the rationale for use of a modality and its safety considerations.

For more detailed information about these therapeutic modalities, see the following pages: 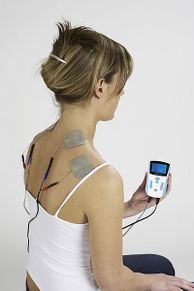 Thermotherapy and cryotherapy, the application of therapeutic heat and cold, are referred to as conductive modalities - they utilize the conduction of thermal energy to produce a local and occasionally a generalized heating or cooling of superficial tissues with a maximum depth of penetration of 1 cm or less.[3] 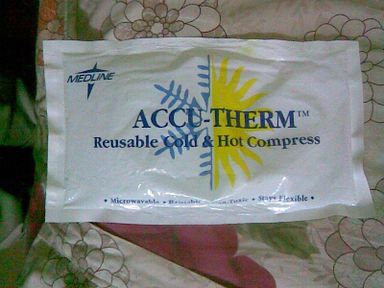 It also works by stimulating fibroblast proliferation[4], accelerating endothelial cell proliferation[5], and improved phagocytic activity of inflammatory cells[6]. Heat is believed to have a relaxing effect on muscle tone by reducing muscle spindle and gamma efferent firing rates; there is also the theory that relaxation of muscle is assumed to occur with the disappearance of pain.[3] 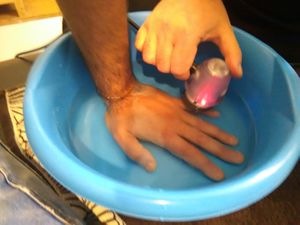 Ultrasound utilizes sound energy, pressure waves created by the mechanical vibration of particles through a medium. The flow of ultrasound may be delivered as an uninterrupted stream (continuous mode) or delivered with periodic interruptions (pulsed mode). Ultrasound is classified as a deep heating modality capable of producing a temperature increase in tissues of considerable depth because it travels very well through homogenous tissue (e.g. fat tissue).[11][12] Traditionally it has been used for its thermal effects but it is capable of enhancing healing at the cellular level. Continuous ultrasound is most commonly used when thermal effects are desired but non-thermal effects will also occur.[13] It has been shown to alter all phases of tissue repair: stimulates phagocytic activity of inflammatory cells such as macrophages,[14] and promotes release of chemical mediators from inflammatory cells which attract and activate fibroblasts to the site of injury, stimulates and optimizes collagen production, organization and ultimately functional strength of scar tissue.[15] An examination of research studies to assess changes in blow flow with ultrasound produced inconclusive results; however, recent studies show that nitric oxide released by ultrasound therapy may be a potent stimulator of new blood vessel growth at the site of injury.[16] Ultrasound also aids in pain relief and the literature has proposed reduced conduction of pain transmission as a possible mechnism for the analgesic effects.[17] More recently, low-intensity pulsed ultrasound has been shown to accelerate the rate of healing of fresh fractures due to the enhancement of angiogenic, chondrogenic, and osteogenic activity.[18]

Light Amplification for the Stimulated Emission of Radiation (LASER) utilizes electromagnetic radiant energy, the movement of photons through space. The low-power or cold laser produces little or no thermal effects but seems to have some significant effect on soft-tissue and fracture healing as well as on pain management. Light at the wavelength typically employed in laser therapy is readily absorbed by enzymes, hemoglobin, fibroblasts, and neurologic tissue. Laser has been shown to stimulate cell degranulation causing the release of potent inflammatory mediators such as growth factors,[20] activate phagocytic processes at the site of injury,[21] and activate fibroblast cell function to increase collagen deposition and improve tensile strength.[22].Some reports also show a small decrease in edema produced by inflammation following laser therapy.[23].Absorption by hemoglobin releases nitirc oxide resulting in endothelial cell proliferation and increased microcirculation.[24] Low dosages also result in significantly decreased sensory nerve conduction velocity effect in reducing pain.[25]