The influence of alcohol on physiologic processes and exercise 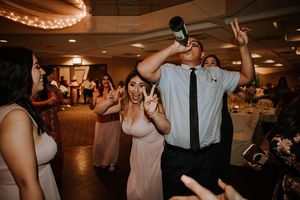 Ethanol, or alcohol, is one of the most commonly used and abused drugs in the world. Alcohol can have many effects on exercise physiological performance, so it is important to distinguish between chronic use, moderate use, and abuse.[1] Alcohol is a mind-altering drug that reduces thinking ability, distorts judgment, and acts as a depressant on the body. Research has suggested that alcohol leads to increased dopamine release in the human brain, bringing on feelings of relaxation and happiness.[2]

Although this drug is often used during recreation for the purpose of feeling good, it should not be used in combination with exercise because of the serious negative physiological effects it has on the body.

Consequenses of Alcohol on Althletic Performance

One of the most easily observable effects of alcohol on the body is dehydration. When alcohol is consumed, anti-diuretic hormone (ADH) is inhibited, causing less water to be absorbed back into the nephrons in the kidneys when urine is cycling through. This causes urine levels to increase, leading to more frequent urination. With higher levels of water exiting the body, dehydration is likely to occur. This is especially a problem during exercise, when the body is also expelling water in the form of sweat. It is important to be fully hydrated for a workout; therefore, it is dangerous to consume alcohol before or during exercise. Although beverages containing below 2% alcohol have shown no negative effects to rehydration, research has suggested that beverages containing over 4% alcohol can delay the recovery process from dehydration to rehydration.[4] This prevention from reaching rehydration in a timely manner could be dangerous in a situation regarding exercise.

The American College of Sports Medicine (ACSM) maintains a position related to alcohol consumption and exercise, stating that alcohol use will not increase exercise performance[12]. Use of alcohol before performing a physical activity can affect an athlete by decreasing "reaction time, hand-eye coordination, accuracy, balance, and complex coordination"[12]. While some athletes partake in alcohol consumption to help with reducing nervousness or increasing confidence before an athletic performance, the ACSM argues that an athletes psychomotor skills and ability to process information, for rapid adaptations, will be negatively affected[12]. Ingestion of alcohol will also affect many of the body's natural response mechanisms to exercise[12]. Blood glucose levels can be affected during exercise due to consumption of alcohol prior to activity, which can lead to hypoglycemia[13]. According to the ACSM, alcohol "will not improve and may decrease strength, power, local muscular endurance, speed, and cardiovascular endurance"[12]. There is evidence suppporting ACSM's proposal that alcohol may decrease power in exercise. Lecoultre and Schutz (2009) studied a group of well-trained male cyclists to determine the effects of an acute consumption of alcohol on cyclists during a 60-minute cycling endurance performance test. The results showed a significant decrease of power output (PO) in the ethanol group from the second 10-minute mark to the end of the test when compared to the PO of the control group[14] .

When working with a patient who consumes alcohol, it is critical for physical therapists to be mindful of the effects alcohol has on blood pressure, blood glucose, heart rate, cognitive function and skeletal muscle substrate utilization.