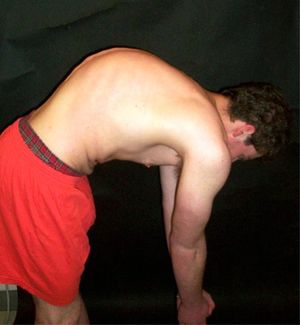 Scheuermann kyphosis, also known as Scheuermann disease, juvenile kyphosis or juvenile discogenic disease, is a condition of hyperkyphosis that involves the vertebral bodies and discs of the spine identified by anterior wedging of greater than or equal to 5 degrees in 3 or more adjacent vertebral bodies. The thoracic spine is most commonly involved, although involvement can include the thoracolumbar/lumbar region as well.[1] Image R severe case - pre-operative image of a 22 year old male with Scheuermann's Disease

There are two major forms of Scheuermann's kyphosis.

The spine of an adult is naturally shaped in an S-curve. The cervical and lumbar regions are concave (lordosis), and the thoracic and sacral regions are convex (kyphosis). According to the Scoliosis Research Society, the thoracic spine has a kyphosis between 20 to 40 degrees. A spinal deformity is considered when the curve is greater (or lesser) as mentioned degrees.


Scheuermann’s disease is a structural deformity of the vertebral bodies and spine. The kyphosis of the thoracic region will be around 45 to 75 degrees. Also there will be vertebral wedging greater than five degrees of 3 or more adjacent vertebrae. [5] The wedge shaped bodies characterize the rigid hyperkyphosis we see in Scheuermann’s disease. The hyperkyphosis can be compensated by a lumbar and cervical hyperlordosis. 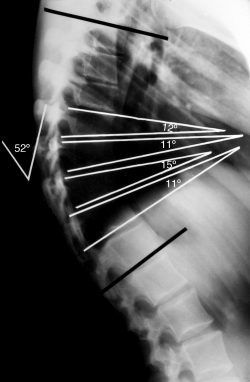 According to Sorenson [5], Scheuermann’s kyphosis is characterized by following criteria.

The adolescent will present with

Patients with Scheuermann's disease may also complain of inability to participate in physical exercise, work and activities of daily living secondary to pain or the presence of their deformity negatively affecting their cosmetic appearance.[6]
Possible to see cutaneous skin pigmentation at the area of greatest curvature due to skin friction on chair backs.[6]
The natural history of Scheuermann’s kyphosis is unclear, with conflicting reports as to the severity of pain and physical disability. [7]

History and physical along with AP/lateral radiographs comprise the essential components for evaluating Scheuermann kyphosis. Lateral radiographs are required for diagnosis, and diagnostic criteria including the following:

Typically not a necessity, MRI can be helpful to further evaluate anatomic changes or for pre-operative planning. CT imaging is usually not needed. There are also no specific laboratory tests or histologic findings necessary for the diagnosis of Scheuermann kyphosis[1].

Following self-reported outcome measures can be used after an operative treatment [9] or for untreated Scheuermann’s disease as well [6]: 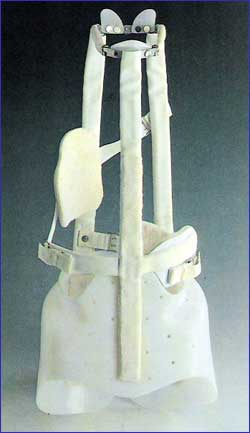 2. Extension bracing plus above

A child or youth with a mild kyphosis may simply need to be observed for changes in the curve, as well as be educated on their posture and activities by the physiotherapist.

The doctor may suggest bracing along with exercise.

Physiotherapy is recommended in combination with bracing.

According to Lowe, brace treatment is almost always successful in patients with kyphosis between 55 degrees and 80 degrees if the diagnosis is made before skeletal maturity.

Other aspects of Physiotherapy Treatment 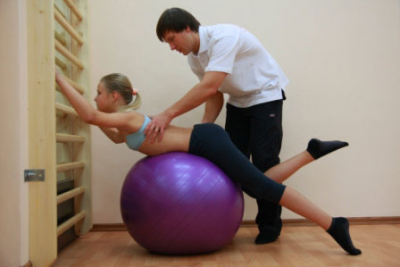 The kyphotic posture can be treated with the Schroth method [20]

Examples of Schroth exercises are shown at R 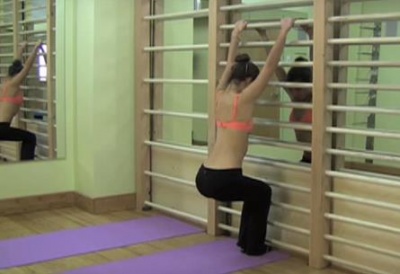 Another treatment regime is outline her, using a different method [24] There are five Principles of Correction:

More clinical trials are necessary to evaluate the effectiveness of conservative interventions, especially different exercises and manual therapies. These should also be combined/compared with braces. [7]