Scapulothoracic Posture and Its Effect on GH Instability 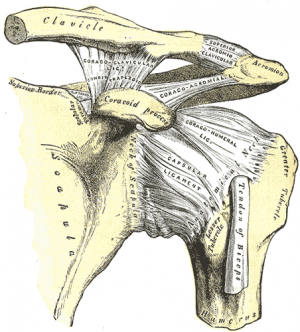 The shoulder complex is a set of 5 highly mobile and stable mechanically interrelated articulations controlled by groups of synergistic muscles found in the proximal part of the upper extremity, attached to the axial skeleton. So it is, structurally and functionally, the base of the upper extremity. Therefore, once it is affected, the whole upper limb will be affected.[1]

The shoulder complex is highly mobile to help the upper extremity and its distal outstanding part; that is the hand, to perform its function which is embracing the whole world around the human as it is stated by many bio-mechanists. But to be highly mobile and in the same time functional, stability must be an integral factor of the whole equation.

The Glenohumeral joint is a synovial ball and socket joint. Nevertheless, in fact, the glenoid cavity is not deep to be described as a congruent socket which can embrace the humeral head, and it is better to just describe it as a golf ball pressed against a coin; the size of a quarter[1]. This incongruent osteologic structure provides the GH with great mobility to the advantage of its stability, so its always phrased that the GH joint favors mobility rather than stability. However, there are many mechanisms and structures either passive or active to maintain the stability of the joint in both the dynamic and static situations. And the scapular position is considered one of the most important mechanism helping the GH remain stable as possible.[1]

The scapulothoracic joint is an articulation between the anterior surface of the scapula and the postero-lateral wall of the thorax. But it is not considered a true joint; Firstly, it has none of the usual joint characteristics and its stability depends on the integrity of the Acromioclavicular (AC) and Sternoclavicular (SC) joints, secondly it does not contain a synovial membrane or ligaments connecting the bones. Finally, there is no bone to bone direct contact where the two surfaces are separated by thick layers of muscles to reduce the shear forces.[2]

Scapulothoracic and its relation to the GH stability. [edit | edit source]

One passive mechanism for controlling static stability at the GH joint is based on the compression of the humeral head on the inclined glenoid fossa,[3] but how can this compression be maintained while the alignment of the GH joint is virtually vertical to allow the 360 degrees freedom of the joint?

At rest with no load , the upward rotation of the scapula combine the resultant force vector of the superior capsular structures - These structures include the superior capsular ligament, the coracohumeral ligament, and the tendon of the supraspinatus - with the force vector due to gravity yields a compressive locking force, oriented at right angles to the surface of the glenoid fossa. The compression force (CF) stabilizes the GH joint by compressing the humeral head firmly against the glenoid fossa, thereby resisting descent of the humerus. In addition to the effect of the scapular position on the force vectors of the peri-articular structures, the incline plane of the glenoid fossa acts as a shelf to prevent the descent of the humeral head.[4]

But with load at the level of wrist: in addition to the previous, the rotator cuff muscles contract isometrically in a direction parallel to the horizontal vector of the superior capsular structures. Interestingly it was found that the more horizontal rotator cuff muscles (and, when needed, the posterior deltoid) are recruited as a secondary source of static stability before the more vertically running muscles, such as the biceps, triceps, and middle deltoid.[5]

The chronic downward rotation of the scapula either due to the poor posture or secondary to the paralysis or weakness of certain muscles, such as the upper trapezius will result in increasing the angle between the force vectors created by the superior capsular structures and gravity which yields a reduced compressive force. These longstanding downward rotations will result in plastic deformations in the SCS which result finally in GH instability.[1]

For more infromation on how to correct the patients posture to help them overcome the scapulothoracic downward rotation which lead to susceptible Glenohumeral instability click here.