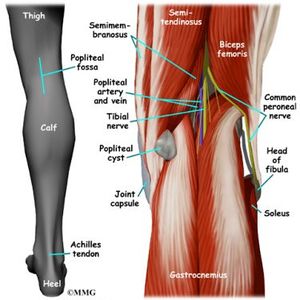 The Biceps Femoris tendon (superolateral) and Semimembranosus reinforced by Semitendinosus (superomedial). The medial and lateral heads of Gastrocnemius form the inferomedial and inferolateral boundaries, respectively[3].

The floor of the fossa is formed by the Popliteal surface of the Femur, the capsule of the Knee reinforced by the oblique Popliteal ligament and, the Popliteus muscle covered by its Fascia[1].

The roof of the Popliteal fossa is covered by the Fascia Lata which is strongly reinforced by the transverse fibers. Thus, the roof is pierced by the small Saphenous vein and the posterior Femoral cutaneous nerve[1].