It is a diagnosis of exclusion and other causes of osteonecrosis (including sickle cell disease, leukaemia, corticosteroid administration, Gaucher disease) must be ruled out.

The cause of LCPD is not known. It may be idiopathic or due to other aetiology that would disrupt blood flow to the femoral epiphysis, e.g. trauma (macro or repetitive microtrauma), coagulopathy, and steroid use. Thrombophilia is present in approximately 50% of patients, and some form of coagulopathy is present in up to 75%[1].

LCPD disease is relatively uncommon and in Western populations has an incidence approaching 5 to 15:100,000.

The specific cause of osteonecrosis in LPCD disease is unclear.

Osteonecrosis generally occurs secondary to the abnormal or damaged blood supply to the femoral epiphysis, leading to fragmentation, bone loss, and eventual structural collapse of the femoral head. In approximately 15% of cases, osteonecrosis occurs bilaterally[2].

A long bone has two parts: the diaphysis and the epiphysis. The diaphysis is the tubular shaft that runs between the proximal and distal ends of the bone. The hollow region in the diaphysis is called the medullary cavity, which is filled with yellow marrow. The walls of the diaphysis are composed of dense and hard compact bone.[3] 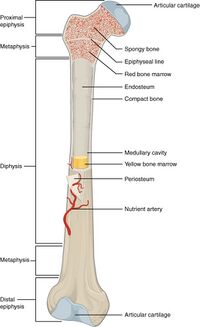 LCPD is present in children 2-13 years of age and there is a four times the greater incidence in males compared to females. The average age of occurrence is six years.[4]

Multiple classifications can be utilized to describe Legg-Calve-Perthes disease. The lateral pillar, or Herring, classification is widely accepted with the best interobserver agreement. It is generally determined at the beginning of the fragmentation stage, approximately 6 months after initial symptom presentation. It cannot be used accurately if the patient has not entered the fragmentation stage.

Goals of treatment include pain and symptom management, restoration of hip range of motion, and containment of the femoral head in the acetabulum.[1]

The younger the age at the time of presentation, the more benign disease course is expected, and also for the same age, the prognosis is better in boys than girls due to less maturity. Conservative treatment is favourable in children with a skeletal age of 6 years or less at the time of disease onset[2].

In later life, hip replacements may be necessary.[2]

An MRI is usually obtained to confirm the diagnosis; however, x-rays can also be of use to determine femoral head positioning.

Since LCPD has a variable end result, an imaging modality that can predict the outcome at the initial stage of the disease before significant deformity has occurred is ideal.

To quantify femoral head deformity in patients with LCPD novel three dimensional (3D) magnetic resonance imaging (MRI) reconstruction and volume-based analysis can be used. The 3D MRI volume ratio method allows accurate quantification and demonstrated small changes (less than 10 per cent) of the femoral head deformity in LCPD. This method may serve as a useful tool to evaluate the effects of treatment on femoral head shape.[8]

Physiotherapy interventions have been shown to improve ROM and strength in this patient population. Patients demonstrate greater improvement in muscle strength, functional mobility, gait speed, and quality of exercise performance.

Non-surgical treatment with a brace is a reliable alternative to surgical treatment in LCPD between 6 and 8 years of age at onset with Herring B involvement. However, they could not know whether the good results were influenced by the brace or stemmed from having a good prognosis for these patients. [14]

The goals of the Initial Phase are:

PT is supervised at a frequency of 2-3 times per week (weekly).

Goals of the Intermediate Phase

PT is supervised at a frequency of 2-3 times per week (weekly). It is recommended that activities outside of PT are restricted at this time due to WB status. If the referring physician allows, swimming is permitted.

PT is supervised at a frequency of 1-2 times per week (weekly).

It is recommended that activities outside of PT are limited to swimming if the referring physician allows.

Note: Running and jumping activities are restricted at this time.

PT is supervised at a frequency of 1-2 times per week (weekly).

It is recommended that activities outside of PT include swimming and bike riding as guided by the referring physician.

Note: Running and jumping activities are restricted at this time.

Table with levels of evidence of the guideline[12][15]

Appendix 3: Guide to levels of evidence referenced in guidelines.

Legg-Calve-Perthes Disease is an idiopathic juvenile avascular necrosis resulting in malformation of the femoral head. It’s a self-healing condition and the long term outcome and therapy strongly depends on the severity of the osteonecrosis and the ultimate shape of the femoral head. Although more prevalent amongst males, females generally have a worse outcome as well as do older children compared to younger ones.

There is next to no empirical evidence due to a lack of experimental research and the therapies prescribed are mostly based on heuristic models.

Treatments generally attempt to maintain and improve range of motion and strength as well as manage pain.