The Ligament Augmentation and Reconstruction System or Ligament Advanced Reinforcement System (LARS) is an artificial ligament used as a synthetic graft for ACL and PCL reconstructions as well as knee extensor, ankle ligament, and shoulder and hip tendon reconstructions [1]. 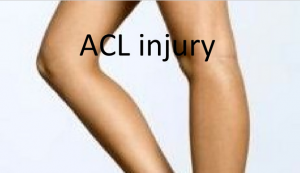 The LARS device is made from polyethylene terephthalate (PET) that is treated post-manufacture to remove a fat emulsion necessary in the processing phase but that can cause reactive synovitis and immune-responses in the human body if not removed[2].

It consists of two sections,

Previous synthetic ligaments have struggled with high occurrences of synovitis as a result of wear on the ligament releasing microparticles into the joint. The new LARS system attempts to overcome this by combining two bundles of free longitudinal fibres in the intra-articular section and inverse warp knitted fibres in the intra-osseous section[1]. The longitudinal fibres are rotated 90° and orientated clockwise or anticlockwise for right or left knee ACL reconstructions respectively to replicate the native ACL and help it resist torsion and shearing forces that have been hypothesised to cause the wear that leads to synovitis in earlier designs [3]. Furthermore, the free orientation of the longitudinal fibres is meant to promote the ingrowth of osteoblast and fibroblast cells and to resist fatigue during flexion and extension. The fibres are also porous to allow for further fibroblastic ingrowth with the intention that newly formed collagen will eventually overtake the synthetic ligament [3][4].

It is important to note that although the LARS ligament has been commercially available since 1992, it has not been granted approval in all countries, including the USA. However, it is available in the UK, France, Germany, Canada, China, and Australia. Many studies have been done on the use of LARS in China, with high levels of success reported with older populations[4]. It is also particularly well known in Australia, gaining national attention because of its frequent use by high-level sports athletes. However, it has recently gained some level of notoriety and many surgeons have become wary of the risk of failure and the resulting synovitis and premature arthritis [5].

Unlike an autograft which can replace the whole ligament, the LARS system can only be used when there are tissue remnants of the original ligament.[1]After it has been decided to use the LARS ligament for the reconstruction pre-operative planning must take place,

First, imaging techniques are used to confirm the clinical diagnosis, identify the anatomic femoral and tibial landmarks that will be used to orientate the surgeon and to determine whether a notch plasty is required [1].

A detailed explanation of the different surgical procedures can be found here:

The LARS ligament can also be used to augment autograft or allograft reconstructions. This is useful when harvested grafts are weak and/or undersized. The synthetic ligament acts a central core over which the biological ligament is looped. The combined ligament can then be fixed using either interference screws or suspensory fixations[1].

There is limited available information on rehabilitation programmes with these details often missing from studies into the LARS ligament [9]. The following protocol has been suggested:[1]

Another study by Hamido et al, compared four-strand hamstring grafts (4-SHG) and 4-SHG augmented with LARS ligaments in ACL reconstructions and used the same rehabilitation protocol for both groups. They listed the following schedule in their study.[10]

Historically, synthetic ligaments have always failed when compared to biological replacements, so surgeons have been reluctant to suggest this new generation of treatment. This has resulted in a shallow base of research on the outcomes of the LARS ligament and even fewer studies have focused on long-term follow-ups. Even after analysing the available data, it is hard to come to a definitive decision on the validity of the LARS ligament since studies find it either a solid replacement in many situations or a device that still fails to live up to its biological alternatives with high rates of failure and joint synovitis.

The following is a summary of many of the available studies and includes some systematic reviews of multiple studies.

The LARS ligament can function as both an independent synthetic ligament if there are enough tissue remnants of the ruptured ACL or as a scaffold to augment the use of other kinds of ligament graft. It is one of a growing number of synthetic ligaments that are attempting to improve on the failures of past artificial devices. There are multiple iterations of the LARS device to suit many different scenarios in ACL reconstruction, but they all attempt to promote faster healing, a quicker return of proprioception and the ingrowth of native tissue into the reconstruction.

There are multiple reconstructions and augmentation techniques based on the type of LARS ligament used and the requirements of the patient.

Rehabilitation programmes for LARS reconstructions are similar to those for autograft and allograft surgeries but boast an accelerated return to function. However, other joint and connective tissue pathologies must be taken into account when designing and prescribing recovery and rehabilitation schedules.

The research into the reliability and validity of the LARS ligament has produced extremely varied data, with many studies producing contrary results. Researchers who have conducted systematic reviews have often cautioned on the methodological quality and the scarcity of high-quality, long-term follow-up studies when making a judgement on the use of the LARS ligament in ACL injuries.