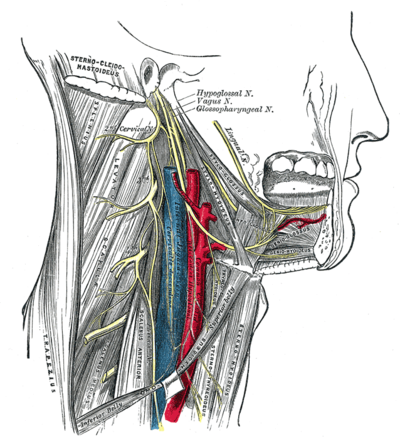 The Hypoglossal nerve is the 12th cranial nerves that originate from the medulla obligate of the brain stem. It innervates all the extrinsic and intrinsic muscles of the tongue, except for the palatoglossus which is innervated by the vagus nerve. It is a nerve with a solely motor function.

The nerve arises from the hypoglossal nucleus of the brainstem, which is located near the midline of the medulla oblongata, and then travels between the carotid artery and jugular vein to end up on the underside of the tongue. It supplies into the tongue

There are two hypoglossal nerves in the body: one on the left, and one on the right.[1]

Damage to the hypoglossal nerve causes paralysis of the tongue. Usually, one side of the tongue is affected, and when the person sticks out his or her tongue, it deviates or points toward the side that is damaged. 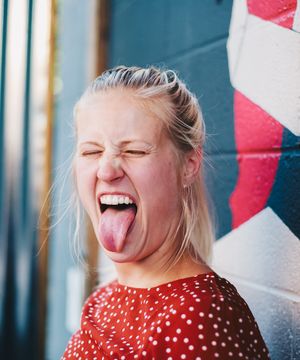 The tongue is first observed for position and appearance while it is at rest. Then the patient is asked to protrude the tongue, move it in and out, side to side, and up and down. The patient does each movement twice: once slowly and the next rapidly. The three observable aspects of the tongue are strength, bulk, and dexterity. Dexterity is tested by having the patient repeat sounds involving the tongue, such as saying "la la la" or use words with "t" or "d" sounds. Testing strength consists of the patient forcing the tongue to the side against the patient’s cheek, while the examiner tries to dislodge the tongue using his/her finger[2].

Special attention is given when the tongue is weak, atrophied, moving abnormally, or impaired.

Hypoglossal nerves can be damaged unilaterally by a multitude of causes especially, tumors, infection, or trauma. The concept of trauma includes surgical trauma as with carotid endarterectomy (surgery to remove the plaques from the carotid artery). Rare bilateral lesions can be the result of radiation therapy[2].

Obstructive Sleep Apnea and Hypoglossal Nerve Stimulation: In obstructive sleep apnea (OSA), the decrease in muscle tone of the genioglossus muscle causes the tongue to retract and impede airflow into the trachea. One possible treatment if the patient is refractory to continuous positive airway pressure (CPAP), oral devices, or surgery. Mild stimulation of the hypoglossal nerve causes the nerve to pull the tongue forward enabling better airflow[2]

Hypoglossal Nerve in Neurologic Disorders: Progressive bulbar palsy and advanced MND can cause severe tongue atrophy and an inability for the tongue to be protruded leading to the inertia of the tongue. Fasciculations frequently occur with atrophy in the case of motor neuron disease. Tremors can also occur on the tongue in the case of alcoholism, parkinsonism, and paresis.