The first rib is the most superior of the twelve ribs. It is an atypical rib and is an important anatomical landmark. It is one of the borders of the superior thoracic aperture.[1] 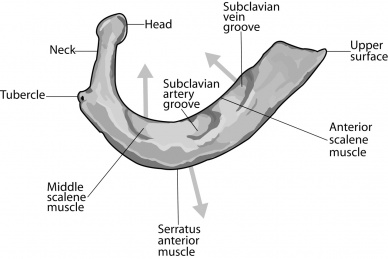 When compared to a typical rib, the first rib is

It has two tubercles:

The first rib is innervated by the first intercostal nerve.

The first rib has several attachments which are listed below;

The first rib is often noted as the most difficult rib to palpate. To palpate the first rib, find the superior border of the upper trapezius muscle and then drop off it anteriorly and direct your palpatory pressure inferiorly against the first rib. Asking a patient to take in a deep breath will elevate the first rib up against your palpating fingers and make palpation easier

The first rib, in particular is involved in thoracic outlet syndrome and Pancoast tumour.

The term ‘thoracic outlet syndrome’ describes compression of the neurovascular structures as they exit through the thoracic outlet (cervicothoracobrachial region)[8]. The thoracic outlet is marked by the anterior scalene muscle anteriorly, the middle scalene posteriorly, and the first rib inferiorly. The term ‘TOS’ does not specify the structure being compressed. TOS affects approximately 8% of the population and is 3-4 times as frequent In woman as in men between the age of 20 and 50 years[9]. Females have less-developed muscles, a greater tendency for drooping shoulders owing to additional breast tissue, a narrowed thoracic outlet and an anatomical lower sternum, these factors change the angle between the scalene muscles and consequently cause a higher prevalence in women. Signs and symptoms of thoracic outlet syndrome vary from patient to patient due to the location of nerve and/or vessel involvement. Symptoms range from mild pain and sensory changes to limb threatening complications in severe cases[9].

Or otherwise known as superior sulcus tumour, refers to a relatively uncommon situation where a primary bronchogenic carcinoma arises in the lung apex at the superior pulmonary sulcus and invades the surrounding soft tissues. Although classically superior sulcus tumours present with Pancoast syndrome, this is only the case in approximately 25% of cases[10]. The missing element is usually Horner syndrome. The most common symptoms at presentation are chest and/or shoulder pain, with arm pain being also common. Weight loss is frequently present[11].

The first rib os also affect by pathology common to all ribs;