Alzheimer's is the most common cause of dementia. It is characterized by a gradual degradation of various physical and cognitive functions[1]. The current fictional case study is about a 42 year old female with early onset Alzheimer’s Disease (EOAD) seeking physiotherapy treatment. Evaluation findings include gait abnormalities, decreased balance and decreased cognition. She presented with forward head posture with slight postural kyphosis and palpable muscle tightness in upper trapezius. Slight weakness in lower extremities (L/E), and decreased shoulder flexion bilaterally. The physiotherapy intervention component includes education, home based exercise programs addressing aerobic and strengthening deficits. Following the physiotherapy intervention, Mrs. S improved her AROM, muscular strength, postural control and gait all the while decreasing overall fatigue and risk of falls. Throughout the treatment plan there were no changes in cognitive function. Mrs. S will continue to be involved in interprofessional care to maintain her quality of life. The physiotherapist’s role in EOAD cases is to maximize independence to help prevent the progression of physical and cognitive decline[2]. In the future, more research must be conducted to determine the adequate frequency, intensity, and duration of treatment for patients with EOAD[3][4]. 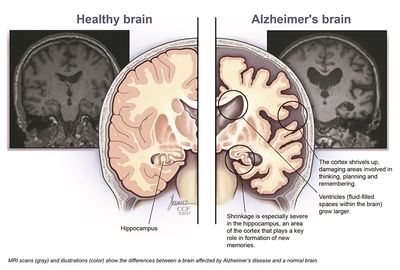 Alzheimer's is “a type of dementia that causes problems with memory, thinking and behaviour. Symptoms usually develop slowly and get worse over time, becoming severe enough to interfere with daily tasks”[1]. Literature shows that physical activity has been repeatedly found to improve the ability of patients with dementia to perform activities of daily living (ADLs)[5]. However, it seems that the frequency, intensity, and duration of exercises prescribed in order to elicit benefits varies widely between studies[5]. On the other hand, research regarding the effects of physical activity on the cognitive function of patients with dementia are inconclusive. A review conducted by McDonnell et al., stated that there is a small effect of aerobic exercise programs on improving cognitive function[6]. However, another review states that an exercise program combining aerobic and strength conditioning evokes no effects on cognitive function[7]. The current case study describes a patient with EOAD who presents with mild difficulties with her ADLs as well as other symptoms such as reduced balance, gait abnormalities, reduced aerobic capacity, and cognitive decline. This report strives to document the changes in the patient’s symptom presentation throughout her involvement in physiotherapy.

Mrs. S, a 42 year old female with a 1 year history of EOAD presents to the clinic. She previously worked as a full-time administrator at a real estate office. She is recently unemployed due to the worsening of her condition in the last 3 months. Various progressive cognitive symptoms such as memory deficits and confusion have rendered her unfit to continue to work. Mrs. S sought for physiotherapy in order to delay the physical progression of the disease. Her chief complaints include mild difficulties with gait, balance, and being fatigued easily. She noted that she has stumbled and tripped several times in the past 3 months but was fortunately not hurt. She has also noticed the increasing difficulty she is having with fine motor skills such as writing and doing up her buttons when dressing. With the diagnosis of EOAD, the patient is at an increased risk of various secondary conditions such as osteoporosis and falls. 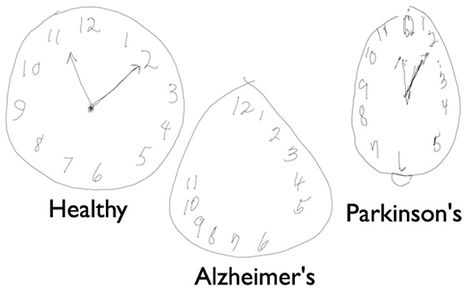 Major clinical findings identified during the subjective interview were the patient’s history of falls, gait abnormalities, and decreased cognition due to the progression of her condition. This is affecting her ADLs, sleep quality and quantity, as well as her interaction with others. She was no longer able to work due to cognitive and physical changes. These factors, in combination with her condition, appear to be negatively impacting her functionality which was once at a high level prior to her diagnosis. This is reflected in her FAQ score of 13/30 indicating impaired function and possible cognitive impairment[8]. Both her GAD-7 score of 8/21 and her PHQ-9 score of 10/27 reflect mild, probable generalized anxiety that will require clinical judgement from a physician for intervention[9][10]. The patient’s cognitive baseline is assessed using the MMSE and the clock drawing test with scores of 20/30 and 2/5 respectively. Both tests support her diagnosis of mild EOAD[11][12].

The difficulty with balance is indicated by a TUG score of 13 seconds which suggest an increased risk of falls[13]. The weakness she is experiencing in her L/E and difficulty with postural control and dual gait tasks are demonstrated within the Mini-BESTest reflecting a score of 21/23[14]. Tasks of poor performance that indicate physiotherapy intervention include: reactive postural control during compensatory stepping when making corrections to forward, backward, and lateral external perturbations. There were also marked difficulties in dynamic gait when asked to speed up, turn head when walking, execute a pivot turn, and when stepping over obstacles. Fine motor skills as assessed through the finger-to-nose test, and finger opposition indicate mild dysmetria.

Medical and lifestyle management are areas of practice addressed within the interprofessional care team. Pharmacological agents will manage cognitive function and behavioural symptoms[16]. In addition, consuming a healthy diet, such as the Mediterranean Diet (MeDi) diet may help slow cognitive decline in individuals with Alzheimer’s disease[17]. 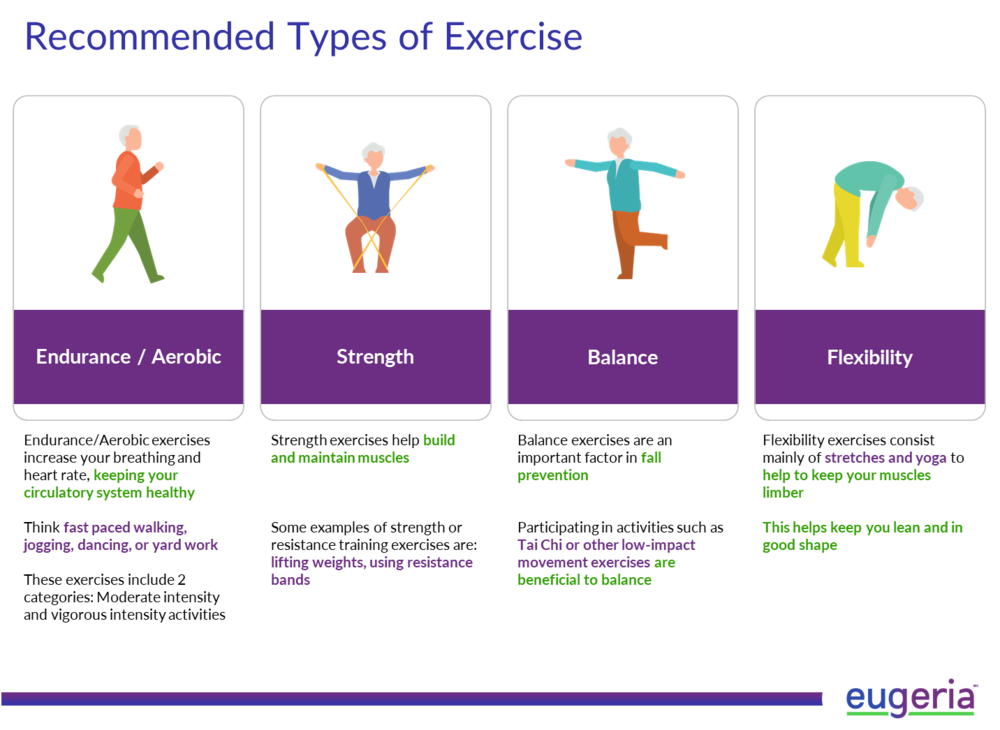 Following Mrs. S’s initial assessment it was determined she would receive four months of physiotherapy care to address her postural and gait impairments with associated fatigue. Her treatment program consisted of visits two times per week for the first month and one visit every 3 weeks for the last three months. A thorough follow-up assessment was performed.

Within four months her AROM and muscular strength improved slightly and there were no significant changes in vital signs. Mrs. S still presents with forward (protracted) head posture along with a slight postural kyphosis. She had slight improvement in her postural awareness and increased motor control of her scapulothoracic stabilizing muscles.

The scores on her outcome measures are listed below:

The GAD-7 and PHQ-9 decreased indicating a lower number of symptoms associated with anxiety and depression. This may reflect her increase in confidence with daily tasks, postural control, strength and decreased fatigue. Mrs. S improved on the gait components of the Mini-Best test, increasing her score by a total of three points. Furthermore, her TUG time on reassessment was 10 seconds which decreases her risk of falls. For the MMSE and clock drawing test no significant changes were reported. These tests will continue to be used to monitor the cognitive status over time.

Based on her progress and improvements over the past four months Mrs. S should continue physiotherapy treatment as needed to help manage the progression of the musculoskeletal, postural, and gait impairments secondary to EOAD. It is suggested she visit her family doctor to receive a referral to community balance and healthy aging programs. Mrs. S would benefit from a referral to an occupational therapist for a thorough home assessment, maintenance of mental health status and future need for assistive devices. Ms. S would further benefit from a nutritionist or dietitian who can educate her on proper eating habits such as the MeDi diet which has been shown benefit patients with Alzheimer's[17].

Mrs. S presented with a history of falls, gait deficits, and decreased cognition. Mrs. S and her physiotherapist developed a list of goals to assist with managing and preventing further progression of her mobility difficulties. After four months of the physiotherapy treatment plan, a thorough follow-up assessments was completed. Improvements where seen in her confidence to perform ADLs  and a decrease in stress and anxiety. Furthermore, her L/E strength increased as well as her mobility. Other cognitive symptoms did not change which may be due to the progression of the disease.

There are many cases of EOAD presenting with gait impairments, postural instability, decreased musculoskeletal and memory function found secondary to the disease. The role of a physiotherapist varies depending on the disease progression, but the overall aim is to maximize independence by improving and preserving motor and cognitive function[2]. Although there are similarities in symptoms among patients with EOAD, the treatment plan should be personalized to each individual. However, as the disease progresses, there should be additional emphasis placed on decreasing risk of falls, managing cognitive decline and reducing the burden on family and caregivers[2][4].

As discussed, intervention approaches such as exercise and physical activity are beneficial for those with EOAD. These interventions are also applicable for patients with dementia and aging related cognitive impairments. The research has shown that a combination of both aerobic and strength exercise can improve physical function[4].  Participation in community and home exercise programs consisting of daily exercises and a graded walking program have shown to improve independence with performing ADLs and overall quality of life (QOL)[18]. Through improving functional ability of the patient, research suggests that home exercise programs also provide benefit to their caregivers by reducing physical and emotional burden[18].

Rehabilitation therapy is constantly evolving and so are the needs of each individual with Alzheimer’s Disease. The progression of the disease varies in severity and time for each individual as should their treatment. Further research should be focused on bridging the gap in literature around disease progression and physiotherapy intervention focusing on determining the appropriate frequency, intensity, and duration of treatment for this population[3][4]. The evolution of the research should focus on selecting a study design and methodical approach that will increase the external validity and thus allow for the transfer of knowledge to the EOAD  cohort.