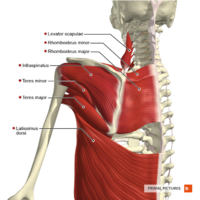 Muscles of the scapular region posterior 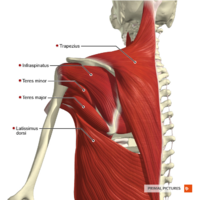 Muscles connecting the upper limb to the trunk posterior

The initiation of movement in the upper limb is a result of activation of these core muscles, divided into 2 functional groups:

The muscle action within the upper core depends on a balanced activity of the stabilizers and mobilizers. If the stabilisers do not stabilise the bones, the mobilising muscles will function at a disadvantage. If dysfunction exists between the stabilisers and the mobilisers shoulder, elbow and back injuries may occur[2]. Assessment of the upper quadrant muscles is essential in the shoulder problems of athletes and the general population[3].

The table below outline the stabilisers and global movers of the UQC. 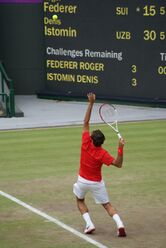 The upper core in action

When the upper core is strong and in good working order many upper limb problems can be avoided. Physiotherapists need be aware of the importance of this core for good primary upper limb sporting endeavours, and for all populations, to avoid potential upper limb soft tissue injuries.

Interrelated concepts re upper limb quadrant function and stability include:

1.Dynamic Shoulder stabilisers. An integrated function of neuromuscular systems requiring muscles to contract and fixate the body against fluctuating outside forces, providing postural support with fine adjustments in muscle tension[4]. The dynamic stability of shoulder complex can be divided into:

2. Anatomy Slings. One sling, the posterior oblique muscle sling (POS), provides connection between the upper and lower core quadrants, via the latissimus dorsi and gluteus maximus, through the thoracolumbar fascia. Slings help to transfer force through the trunk and facilitate rotational movements. It is the muscular and myofascial components of slings that make powerful eg baseball/cricket pitches, baseball/golf swings.[5]