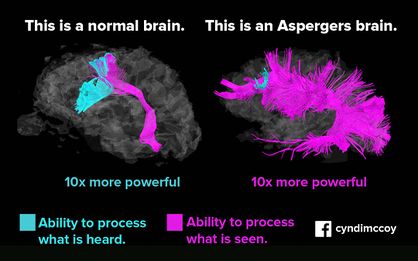 Asperger syndrome is now defined in ICD-10 as an autistic disorder in which there are abnormalities in reciprocal social interaction and in patterns of behaviour and interests, without clinically significant delay in spoken or receptive language, or cognitive development[1]. Asperger syndrome (AS) thus refers to a particular group of high-functioning children who did not have delayed speech development, and need not have had developmental difficulties before 3 years (in contrast to the onset criterion for childhood autism).[2]


DSM-IV-TR definition of Asperger Syndrome (called “Asperger Disorder”) (APA, 1994):
A. Qualitative impairment in social interaction, as manifested by at least two of the following:

B. Restricted repetitive and stereotyped patterns of behaviour, interests and activities, as manifested by at least one of the following:

Persistent preoccupation with parts or objects

C. The disturbance causes clinically significant impairment in social, occupational, or other important areas of functioning.

E. There is no clinically significant delay in cognitive development or in the development of age-appropriate self-help skills, adaptive behaviour (other than in social interaction), and curiosity about the environment in childhood.

F. Criteria are not met for another specific Pervasive Developmental Disorder or Schizophrenia

In general, pharmacological interventions with young children are probably best avoided. Specific medication might be indicated if AS is accompanied by debilitating depressive symptoms, severe obsessions, and compulsions, or a thought disorder. It is important for parents to know that medications are prescribed for the treatment of specific symptoms, and not to treat the disorder as a whole.[1]

It is difficult to accurately diagnose an individual with AS due to the complexity of the syndrome and the overlap of symptoms into other syndromes like Autism. AS is defined using the Diagnostic and Statistical Manual of Mental Disorders, Fourth Edition (DSM-IV) which is listed above. It is categorized as a Pervasive developmental disorder (PDD); other PDD includes Rett syndrome, childhood disintegrative disorder, and Autism. It is also important to note that in order to be diagnosed as AS an individual cannot have any clinically significant delays in language or a lack of any clinically significant delay in cognitive development, including the development of age-appropriate self-help skills. [8]


Some clinicians do not recognize AS as a separate disorder from autism, instead, they refer to it as high-functioning autism (HFA). These doctors put it on the mild end of the Autism Scale. This has made collecting data on diagnoses difficult as they use the terms AS and HFA interchangeably.
Key behavioural features doctors are looking for:

Diagnoses of AS takes two steps, the first step is during a screening performed by the family doctor or paediatrician. If problems are noted the child then moves onto the second step which is a comprehensive team evaluation to determine if the child has AS. The team normally is made up of a psychologist, neurologist, psychiatrist, speech therapist, and additional professionals who have expertise in diagnosing children with AS.[4]


AS must be diagnosed by trained and experienced providers due to the complex diagnostic process and to determine the variety, intensity, and comprehensiveness of services required. The American Academy of Child and Adolescent Psychiatry published practice parameters for the assessment of individuals with AD and PDD.[8]

The exact cause of Asperger Syndrome has yet to be established, however, researchers have found that brain abnormalities contribute to the development of AS. Scientists attribute these abnormalities to irregular migration of embryonic cells during fetal development. The abnormal cell growth goes on to change the structure of the brain and affects the neural circuits that control thought and behaviour.


There is also believed to be a genetic component to AS due to the high tendency of the diseases in families. For example, identical twins are more likely to both develop AS than fraternal twins. Scientists have yet to identify a specific gene to causes AS. Most recent research indicates that an individual is more likely to develop AS when a common group of genes is changed or deleted.

Children with AS have impaired detoxification capacity and may suffer from chronic oxidative stress.[9]
They may also experience cardiac problems, including dilatation of the right cardiac ventricle and hypertrophy of the left ventricle with mitral insufficiency[10]

A large part of the medical treatment for individuals with AS is psychological interventions. One type of treatment done in this field is Cognitive Behavioural Therapy (CBT) intervention, which reduces anxiety while increasing the Theory of Mind (ToM) skills. In one research study, participants who underwent CBT showed multiple trends in anxiety reduction as well as significant decreases in both panic disorder (as noted in participants’ self-reports) and in generalized anxiety (as noted in parents’ reports of their children’s anxiety). Data demonstrated changes in anxiety, which varied according to the participant’s motivation to change, participation in sessions, and application of strategies outside the counselling sessions.[11]

For individuals with AS it is common to have comorbidities, and treatment is often focused around those comorbidities. An example of this is the treatment of ADHD with Ritalin (methylphenidate). Research using functional magnetic resonance imaging has shown a reduction of cerebral activity bilaterally in the parietal lobe under the influence of Ritalin. These findings prove that medications can help with the complexity that surrounds individuals with AS and their comorbidities.[12]

Children with AS have difficulty with their visual sensitivity to human movement and postural responsibility to optic flow. This correlates directly with their lack of certain motor skills such as difficulties with perception and production of movement and dysfunctional perceptual-motor linkages in these children.[13]

They are often susceptible to sensory overload; they may be hypersensitive to light and sound. The therapist must be aware of these difficulties. It may be valuable to ask someone with AS whether there is something in the environment that is overwhelming for that person[14]. Conversely, people with AS may be hyposensitive, for example to pain or may have other sensory impairments.

Cognitive strategies, known as Cognitive Orientation for (daily) Occupational Performance has also been utilized for improving motor performance in individuals with AS. This intervention is a child-focused goal-directed technique used by occupational therapists to help motor-impaired individuals reach functional goals.

Structured physical activities, such as exercise or dance classes may be another option to consider for improvement of motor control. An exercise study in 15 children with ASD (age 5–16) compared to a no-exercise ASD control group (n = 15) founds that teaching martial arts techniques to children with ASD four times per week for 14 weeks consistently decreased their stereotypic behaviours[14].

Children with ASD, including AS, have also been shown to improve function through horseback riding or Hippotherapy. Children who participated in Hippotherapy exhibited greater sensory seeking, sensory sensitivity, social motivation, and less inattention, distractibility, and sedentary behaviours. Research shows that Hippotherapy can be a viable treatment option in children with ASD and AS.[16]


Additionally, children with ASD and AS who participate in water exercise swimming programs have shown improvements in aquatic skills, as wells as an improvement in social skills. The key importance of these findings for children with AS is the potential it holds for social improvement and sensory integration.[17]


Kathy J. Marshack: Life with a Partner or Spouse with Asperger Syndrome: Going Over the Edge? Practical Steps to Saving You and Your Relationship.http://search.ebscohost.com/login.aspx?direct=true&db=hch&AN=59259259&site=ehost-live