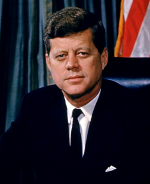 Addison’s disease is another name for primary chronic adrenal insufficiency. It is a condition where the adrenal cortex (the outer layer of the adrenal gland that produces mineralocorticoids, glucocorticoids, and androgens) is progressively destroyed, resulting in decreased secretions of the hormones.[1][2]  Cortisol, a glucocorticoid, and aldosterone, a mineralocorticoid, are the primary hormones that are decreased with this disease, causing body-wide metabolic disorders and fluid imbalances.[1]

President John F. Kennedy is the most widely known person who was believed to have suffered from Addison's disease, easily noting the bronze colouring of his skin in photographs.  Prior to diagnosis, he was so ill that he collapsed during his final campaign event for the House of Representatives, being described as "sweating heavily and his skin being discoloured."  When he was properly diagnosed, doctors gave him the prognosis of no more than a year to live.[3] 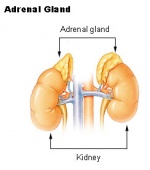 The adrenal (suprarenal) glands are endocrine glands that are located superior to the kidneys.  The adrenal glands have two layers the adrenal cortex (the outer layer) that is responsible for producing steroid hormones and the inner layer the medulla which is responsible for secreting the hormones that control our stress response, commonly referred to as our fight or flight response[4] 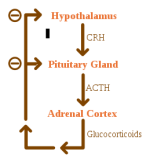 ACTH Negative Feedback Loop
The adrenal cortex is the outer layer of the gland and is divided into three zones:

Total loss of the steroid hormones secreted by the outer layer results in death due to dehydration and electrolyte imbalance.  Unless corrected by hormone replacdement therapy death will usually occur within weeks, sometimes within a few days.[4]

The inner zone of the adrenal glands are responsible for producing catecholamine.  These are hormones such as epinephrine (adrenaline) and norepinephrine (noradrenaline) and small amounts of dopamine whose function is to initiate a rapid response to stressful situations.[4]

Addison’s disease occurs in about 4 out of 100,000 Americans each year.  Even though it is seen throughout the lifespan in both genders, it most commonly occurs in middle-aged white females. 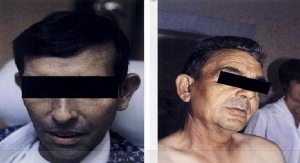 Hyperpigmentation of buccal mucosa in Addison's disease
Addison’s disease will develop insidiously, with the signs of the disease not developing “until at least 90% of both glands is destroyed and the levels of circulating glucocorticoids and mineralocorticoids are significantly decreased.”[2]  Some of the clinical signs and symptoms of Addison’s disease include:

Addison's disease can occur alone, or it can occur along with other autoimmune disorders, leading to polyendocrine syndrome[6][7].

Osteoporosis is more common among people with Addison's disease compared to healthy individuals because of the medical management with long-term steroid replacement therapy. Steroids have several effects on bones including increasing osteoclastic activity, decreasing osteoblastic formation, and decreasing the absorption of calcium in the intestines.[8]

There are a number of causes for Addison’s disease, however, “90% of all cases are attributable to one of four diseases: autoimmune adrenalitis, tuberculosis, the acquired immune deficiency syndrome (AIDS), or metastatic cancers.”[2]  The primary sites of the metastases to the adrenal glands usually arise from carcinomas of the lungs or breasts.[2]

Also known as 'adrenal crisis' and 'acute adrenal insufficiency', this presentation is rare but should not be overlooked. When in crisis, the patient with Addison's disease the adrenal glands stop producing enough cortisol to supply the body. Cortisol is involved with many body systems and this condition can result in threat to life. Triggers include dehydration, traumatic physical events, pregnancy, infection, surgical procedures, allergic reactions and low blood sugar in diabetic patients. These patients may present with nausea and vomiting, abdominal pain, anorexia and chills. When untreated, symptoms of shock, fever and convulsions may follow. Patients should be referred for medical management urgently.

However, Goodman and Fuller[1] offer some key points for the physical therapy management of patients with Addison's disease:

Premature Mortality in Patients with Addison’s Disease: A Population-Based Study [20] [view article at The Journal of Clinical Endocrinology & Metabolism]