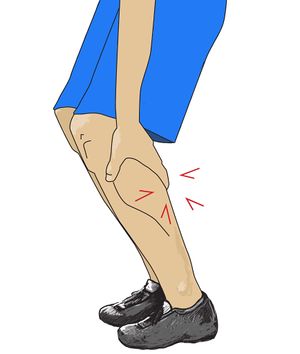 The muscle cramping that happens during exercise is called Exercise-Associated muscle cramps (EAMC). It is defined as a syndrome of involuntary painful skeletal muscle spasms that happens during or immediately after a workout.[1] During cramping, skeletal or voluntary muscle contracts strongly and unable to relax resulting in EAMC. It occurs as localized muscle cramping that happens spasmodically in various exercising muscle groups, usually the calf, hamstring, or quadriceps muscles. The calf muscles are the foremost commonly affected.[2] The pain and disability that results usually limits affected limb movement, though the condition normally resolves without intervention. Resolution can take from a couple of seconds to minutes, but the afflicted part is non-functional during this time and perhaps for some time afterward.[3]

Exercise-associated muscle cramping (EAMC) is a very common condition that needs medical attention during sporting events. The incidence of EAMC's increases with higher frequency, intensity, and duration of the exercise, and are especially prevalent among athletes who participate in long-distance endurance events, like triathlon and marathon or ultra-marathon distance running, and it is also seen in many other sports, including basketball, the varied football codes, tennis, cricket, and cycling, etc.[2][4]

The prevalence of EAMC has been documented for triathletes (67%) runners [5] (roughly around 30% to 50%), rugby players (52%), and cyclists (60%).[6][7] Despite the high prevalence of EAMC, its risk factors, pathophysiology, management, and prevention aren't completely understood.[2] Cramps seem to be more prevalent in muscles that cross two joints, and athletes who cramp have been shown to have a lower threshold frequency for cramping (15 Hz) than non–cramp-prone individuals (25 Hz). The threshold frequency is the minimum frequency of excitation required to stimulate a muscle cramp. The fact that cramp-prone individuals have lower threshold frequency for the onset of EAMC supports the validity of a neurological origin of cramps.[3]

The risk factors related to EAMC in endurance athletes include high-intensity running, long-distance running (> 30 km), subjective muscle fatigue, all of which are intense and exhaustive physical efforts. Other risk factors found were older age, a longer history of running, higher body mass index (BMI), shorter daily stretching time, irregular stretching habits, competing at a faster race pace than training pace, hot weather, and a positive family history of cramping.[3][8] Factors related to a history of EAMC included underlying chronic disease (including the cardiovascular, respiratory, gastrointestinal, and nervous system, kidney, bladder, and hematological diseases), as well as cancer, allergies, regular medication use, and past history of injury. Experienced runners are also at higher risk.[9]

There are two theories about the origin of EAMC. The older one is based on “dehydration” and “electrolyte imbalance” theory (water-salt balance), and the more recent one is the “altered neuromuscular control” theory (neurological origin).[9] Traditional theories of cramping during exercises such as dehydration, electrolyte loss, metabolic accumulation, and heat accumulation, do not seem to be the main causes of EAMC. Of all theories known regarding causes of EAMC, a neurological origin is supported by the most robust body of literature.[10] 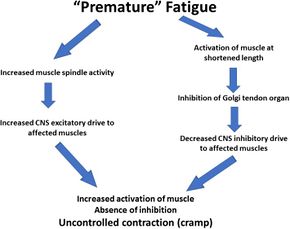 The neuromuscular theory proposes that muscle overload and muscle fatigue resulting in an imbalance between excitatory and inhibitory impulses from muscle spindles and Golgi tendon organs (GTOs) respectively.[11] This occurs when the muscle contracts in an already-shortened position. The reduced tension in the muscle-tendon likely decreases the inhibitory feedback from GTO afferents, thereby predisposing muscle cramping from the imbalance between inhibitory and excitatory drives to the alpha motor neuron.[3] This enhanced excitability at the spinal level which results in a rise in alpha motor neuron discharge to the muscle fibers, producing localized muscle cramps.[12][13] EAMC usually occurs more frequently at the end of competitions and physical work and when the muscle contracts while it is already shortened. Stretching, the primary treatment for acute EAMC is assumed to alleviate  EAMC via autogenic inhibition.[13] Stretching increases the strain within the muscle’s tendon, resulting in GTO activation and a rise in inhibition of the alpha motor neuron, which can restore the physiological relationship between excitatory impulses and inhibitory impulses to α motor neuron.[14][15] Muscle fatigue is a continuum rather than a condition. It's likely that the amount of fatigue required to elicit cramping is unique to each and every athlete.[9][16]

Water and electrolytes are vital elements for maintaining normal body functioning. The human body is 50-70% water, and the body's fluids are divided between two main areas referred to as the intracellular (inside the cells) and extracellular compartments (outside the cells). Water is important for keeping cellular integrity and function Similarly, electrolytes like sodium, potassium, and chloride play an important role in body fluid balance, nerve conduction, and contraction of the muscle to name a few. As fluid and electrolytes are the main components in sweat, their loss while exercising is usually associated with EAMC genesis.[6][9]

Proponents of the dehydration/electrolyte imbalance theory posit losses in sodium and chloride from exercise-induced sweating causes a large deficit in whole-body exchangeable sodium. Consequently. fluid shifts out of the interstitium (the space surrounding muscle cells) and into the blood vessels. The interstitium then contracts until there is mechanical deformation of peripheral nerve endings and an increase in the concentration of excitatory neurotransmitters (for example, acetylcholine), metabolites, and electrolytes.[15] Then select motor nerve terminals to become hyperexcitable, spontaneously discharge, and result in EAMC. However, this theory suffers from a number of inconsistencies and limitations.[3]

EAMC can be identified clinically by acute pain, stiffness, visible bulging or knots in the muscle, and possible soreness which will occur suddenly with no warning and lasts for several days.[19][20] The injured muscles often appear to be randomly involved, and as one bundle of muscle fibers relax, the adjacent bundle contracts, giving the impression that the spasms wander. Concomitantly, there could also be alterations in joint position due to the sustained involuntary contraction. For example, the ankle and toes may point downward (plantarflexed) if the calf is actively cramping. Typically, EAMC lasts a few seconds or minutes and affects the skeletal muscles which cross two joints (for example, quadriceps, hamstrings, calves).[3]Moreover, some athletes are able to sense EAMC are imminent or articulate they "feel like they will cramp". This "cramp-prone state" usually precedes the onset of full EAMC and is usually an indicator an athlete needs to modify or cease their activity level. EAMC may be completely debilitating although in few cases EAMC does not appear to affect athletic performance.[15]

Another popular EAMC remedy is the ingestion of pickle juice. Pickle juice is normally recommended due to its high sodium content, and the assumption that EAMC is caused by sodium losses. Interestingly, ingesting small volumes (approximately 80 ml) of pickle juice during an exercise-induced muscle cramp relieved the cramps 37% faster than water and faster than drinking nothing at all. A recent study hypothesized that it was the acetic acid (vinegar) in pickle juice that elicited the reaction. Further study is needed to explain the elements that trigger this reflex as well as pathways and receptors through which pickle juice relieves cramping.[21]

EAMC usually causes temporary discomfort and return to activity or sport is self-regulated according to the athlete's tolerance level, However. EAMC can prevent the completion of athletic activity in exceptional cases. Many athletes who develop EAMC are able to resume exercises following self-treatment (for example, decreasing the pace or stretching).[1] As mentioned earlier, it is likely that it will recur if exercises or running continues after cramping which increases nervous system excitability. If professionals suffer from persistent and repeated EAMC despite failed attempts at prevention, they must consult a physician to undergo advanced medical screening to rule out predisposing medical conditions.[22] Limited data is available to know about the long-term effects of EAMC on health and is an area ripe for further study.[23]

The pathophysiology causing EAMC is most likely due to muscle fatigue, It has been found that athletes who are returning to competition or beginning the functional return to sport phase of rehabilitation after injury are particularly vulnerable to EAMC. These athletes are prone to experience early muscle fatigue, to be less acclimatized to hot conditions, and to have diminished sweating efficiency, thereby raising the potential to develop EAMC.[14] Proper rehabilitation after an injury will prevent overstressing while ensuring adequate sport-specific conditioning prior to return to sports.[13]

Unfortunately, there are no proven strategies for the prevention of exercise-associated muscle cramps. However, regular stretching using post-isometric relaxation techniques, a dynamic warm-up consisting of movements designed to actively prepare the muscle for performance, correction of biomechanical imbalances and posture, reducing exercise intensity or duration, and avoidance of provocative drugs could also be an effective technique.[9] Other strategies, like neuromuscular reeducation including eccentric muscle strengthening in training programs, may help prevent EAMC. In a case report, persistent hamstring EMAC was eliminated when the triathlete incorporated gluteal strengthening exercise into his training regimen.[24] Maintaining sufficient carbohydrate reserves during a competition to reduce the likelihood of fatigue, or treating myofascial trigger points are speculative.[22]