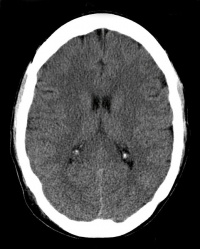 Watershed cerebral infarctions (WI), also known as border zone infarcts, occur at the border between cerebral vascular territories where the tissue is furthest from arterial supply and thus most vulnerable to reductions in perfusion.[1]

These strokes may often be preceded by specifically precipitating circumstances that induce hypotension and/or hypovolemia (rising from a supine position, exercise, Valsalva's maneuver, administration of antihypertensive drugs, bleeding and anemia)[2].

WI are a frequent clinical entity and are often under-recognised due to slow progression of the presenting symptoms and to the frequent association to seizures.[3]

It has been proposed that both episodes of hypoperfusion and microemboli from inflamed atherosclerotic plaques play a role in pathophysiology of WI. If low blood flow to watershed areas lasts for longer than a few minutes, the tissues in the watershed areas begin to die, causing a stroke due to low blood volume.

Weakness or paralysis, especially of the legs.

Vision loss in half of their field of vision.

Cause seizures more often than do other types of stroke.

A watershed stroke can often be diagnosed through a neurological history and physical examination and can often be identified on a brain CT or a brain MRI.