, gram positive, non-capsulated spore forming bacteria Clostridium tetani ("C. tetani").  C. tetani can resist very high temperatures and is not spread from person to person. Tetanus is a rare and often fatal neurological disease that causes increased tone and muscle spasms due to the bacteria.[2],[3]  The most common way the bacterium enters the body is through wounds which are susceptible to infection if they are: “contaminated with soil, feces, or saliva, puncture wounds including unsterile injection sites, devitalized tissue including burns, avulsions and degloving injuries”.[4]
The disease tetanus extends all the way back to the fifth century BC. However, it was not until the late 1800s that Arthur Nicolaier discovered the toxins that caused tetanus which have the ability to infect several species and that protection could be provided by passive transfer of an antitoxin.  A few years after the discovery of the tetanus toxins Robert Koch was able to obtain a culture of the bacteria.[3][1] In 1924, the immunization to protect people against tetanus was developed by Pierre Descombey and by 1940 the tetanus immunization became routine in children’s vaccinations.[1][2]

In the United States, from 2000-2007 there has been an “average of 31 reported cases per year with the majority of them being over the age of 40.”[5] In recent years the percent of people who contract the bacteria, to those that die from it, has decreased from 30% to 10%.  Since 1989 there has only been 2 reported cases of tetanus in the neonatal population.[5] It is estimated that about 800,000 to one million people die of tetanus every year worldwide.[2] The majority of the cases are found in underdeveloped countries with children and neonates representing most of the cases due to inadequate immunizations and unhealthy medical procedures especially during childbirth.[4] The prevalence of tetanus in the United States has been identified in males over the age of 50, women without formal education, and African Americans in the southern states.  Recently, immigrants and intravenous drug users have had a higher prevalence for contracting tetanus. Anyone over the age of 60 are at an increased risk for contracting tetanus due to the fact that they may not have received the protective immunity. [2] 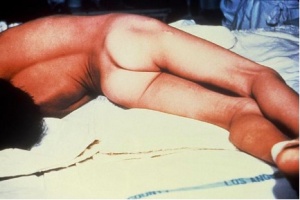 tanus occuring in about 80% of the cases.[5][6] In generalized tetanus, the tetanospamin attacks and inhibits mostly the motor neurons of the CNS and later the neurons of the ANS as well.  As a result a person experiences uncontrollable intense muscle contractions.[4] The first muscles affected are the facial and jaw muscles because of their short nerve pathways.  This condition is commonly referred to as lock jaw or trismus.  As the disease progresses the person will experience stiffness of the neck, difficulty swallowing, and stiffness of the abdominal muscles.[4][5] Spasms can be produced by a stimulus such as light, noise, touch, or happen unexpectedly with no specific cause.[4] Spasms are extremely painful and can occur frequently and can last for several minutes.[4][5] In generalized tetanus “spasms continue for 3-4 weeks and complete recovery may take months.”[5] After several days the ANS will be affected showing others signs such as fever, sweating, elevated blood pressure, and increased or rapid heart rate.[4][5]

Local tetanus can occur before generalized tetanus but this is a much milder form with a decreased amount of associated toxin release.[4] Local tetanus, for the most part, just attacks muscles in a specific (local) area of the body[6]   Localized tetanus is rare, but there is a better prognosis with only about 1% of the cases resulting in death.[5] The presentation of local tetanus is muscle rigidity and continuous contractions close to the injury site.[4][5] 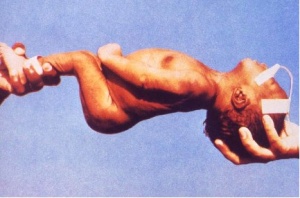 Neonatal tetanus (which is found in newborn babies) is a form of generalized tetanus which also has a high fatality rate.[4] The diagnosis is determined from the symptoms that present.  When the baby is born they are able to suck and swallow normally for 2-3 days and then they lose that ability.  The symptoms of neonatal tetanus are muscle rigidity and spasms which appear around "4-14 days after birth”.[5][7]  The most common way neonatal tetanus occurs is due to non- immune mothers and poor hygiene during the delivery process.[4] Most of the cases of infected infants is a result of infection of the unhealed stump of the umbilical cord especially if the cord has been cut with unsterile instruments. Neonatal tetanus is very common in third world countries.[5]

If an individual has contracted tetanus the drugs of choice and most commonly used to help remove the infection are Penicillin and Metronidazole. Other alternatives are Erthromycin, Tetracycline, Chloramphenicol, and Clindamycin.[6][8][9]

Vaccinations:
Tetanus can be prevented through vaccinations. The vaccination consists of being injected with the tetanus toxoid. The toxoid is available in two different forms: absorbed toxoid and fluid toxoid. The toxoids work by producing specific antitoxins that will neutralize the bacteria. The toxoid is inactivated and does not contain any live organisms. Therefore, the toxoids can not replicate themselves once injected which is why it requires several doses to prevent immunity.[6][9][1] The tetanus vaccine has been combined with pertussis and diptheria to make the DTP vaccine for infants.[7] The vaccination is started in infants 2 months of age in a series of four injections on monthly intervals. The next injections are given at 4, 6, and 15-18 months of age. A booster shot is given to the child between ages 4-6. For adolescents and adults the Tdap vaccine is used which is a combination of tetanus and diphtheria toxin with acellular pertussis.[4][5][1] It is recommended to get a booster shot every 10 years.[10]

There are no specific laboratory or diagnostic tests used to diagnosis tetanus. The diagnosis is made based on clinical signs and symptoms and not on the confirmation of the bacteria C. tetani in the body. [5][6]“C. tetani is recovered from the wound in only 30% of cases and can be isolated from patients who do not have tetanus.”[5]

Once the bacteria C. tetani enters the body the spores multiply and germinate due to the anaerobic environment. In the body, two toxins are released: tetanospamin and tetenolysin.[2][6] It is not certain the exact role of tetanolysin but it is believed that it works together with the toxin tetanospamin.[2][5] Tetanospamin reaches the peripheral nerves by retrograde neuronal transport through the blood or lymphatic system.[2][6] “The length of the peripheral nerves determines how long it takes for the neurotoxins to reach the CNS and cause symtoms. The toxin tetanospamin disrupts the release of the inhibitory neurotransmitters glycine and GABA throughout the CNS but most commonly at the motor end plates, spinal cord, brain, and sympathetic nervous system”.[2] “The disinhibition allows for unopposed muscular contraction followed by muscular rigidity and spasms”.[2] Once the bacteria has entered the body the incubation period may range from days to months. The average incubation period is around 4-14 days.  The incubation period is shorter the closer the injury site is to the CNS.[2][3][5] A shorter incubation period usually correlates with poor prognosis due to a more severe disease.[3]

Renal:[8]
Renal involvement is only found in severe cases of tetanus.

The management of tetanus is categorized into three steps. First the organism in the body needs to be destroyed to prevent further release of the toxin. Next the toxin in the body outside of the CNS needs to be neutralized and finally the effects of the toxin in the CNS need to be minimized.[6][8] Wound debridement, if possible, should be done to help remove the toxin from the body.[6]  The general medical management consists of controlling the spasms, prevent other infections, control fluid and electrolyte balance, and respiratory support.[6][9][1] The primary way to control muscle spasms is sedation and muscle relaxants.[9] The prognosis of individuals with tetanus depends on the supportive care and ventilatory access.[6]