Slow transit constipation ( STC) or  neural intestinal dysplasia (NID), a rare condition of chronic constipation defined as an ineffective colonic propulsion due to deficit and abnormalities of the enteric system that has a control on the motility of the large intestine, most common in women and may start before he age of 10. This condition may present with no pelvic floor dysfunction or underlying systematic disorder.

There are studies suggested an abnormal neurotransmitters in the muscular layer of their intestinal walls such as a deficiency of a peptide known as substance P, which contribute to peristalsis of the intestinal walls , and abnormality of the number, position, or appearance of nerve cells.

The most symptoms varying according to the following:

STC may be diagnosed after birth if the newborn show delayed passage in meconium ≥24h compared with healthy newborn that will need further investigations.

Excluded organic disorders such as: 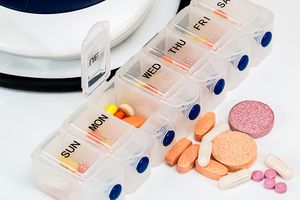 Osmotic laxatives: polyethylene glycol, magnesium citrate, stimulant laxatives such as senna/ senokot or bisacodyl/dulcolax , or a combination of the two.

Prosecretory agents: linaclotide and lubiprostone both show great results in the treatment of chronic idiopathic constipation and inflammatory bowel syndrome[3].

Indications: sever STC, colonic inertia,  impairment in colonic response to food. that showed improvement in symptoms and frequency 6 months after operation. It divided into:

Interferential current: used as a transcutaneous electrical stimulation used to increase the motility of bowel in children and showed improvement in defecation frequency, soiling, abdominal pain, urge to defecate whoever the parameters still not known, in addition, studies suggested the longer the duration the better outcome. Electrical stimulation was first applied for 20 minutes 3times/ week and show only improvement in colon motility. Further studies use 1 hour/ day for six months and showed great improvement in motility and frequency of defecations. Results was quite similar to that carried for 3 months

Application: four electrodes 4 cm × 4 cm near the belly button and the back[6][7]. Ideal time and duration not detected yet.

Pelvic floor dysfunction rehabilitation programme if it is affected.