Running is similar to walking in terms of locomotor activity. However, there are key differences. Having the ability to walk does not mean that the individual has the ability to run.[1]
Running requires:

There is a need for greater balance because the double support period present in walking is not present when running. There is also the addition of a double float period during which both feet are off the ground, not making contact with the support surface.

The amount of time that the runner spends in float, increases as the runner increases in speed. The muscles must produce greater energy to elevate the head, arms and trunk (HAT) higher than in normal walking, and to support HAT during the gait cycle. The muscles and joints, must also be able to absorb increased amounts of energy to control the weight of HAT.

During the running gait cycle, the Ground reaction force (GRF) at the centre of pressure(COP) have been shown to increase to 250% of the body weight.[2]

A useful article that provides a good overview of running biomechanics can be read here:

Novacheck '97: The Biomechanics of Running [3] 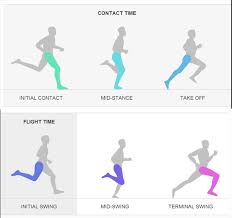 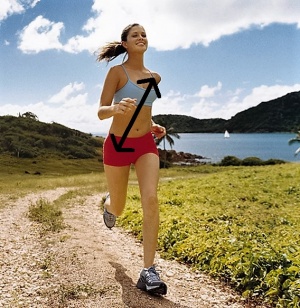 Joanne Elphinstone (2013)[4] describes this as a mechanism for transferring force from the lower control zone to the upper control zone and back again.

In runners the diagonal elastic support mechanism is utilised. This is produced by a constant diagonal stretch and release that is enabled by the body's counter rotation. The force continually flows up and down these force pathways alternately. The pattern of force distribution prevents force being concentrated in one area, but allows wide distribution of force throughout the body.

Elphinsone[4]  maintains that it is crucial to have a well functioning central core area to allow this pattern of force distribution to take place efficiently. 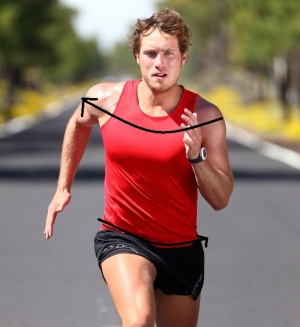 The kinetic chain can be described as a series of joint movements, that make up a larger movement. Running mainly uses sagittal movements as the arms and legs move forwards. However, there is also a rotational component as the joints of the leg lock to support the body weight on each side.

There is also an element of counter pelvic rotation  as the chest moves forward on the opposite side. This rotation is produced at the spine, and is often referred to as the spinal engine. This is also linked to running economy[4]. This counter rotation enables the spinal forces to be dissipated as the foot hits the ground.

Runners may complain of a feeling of restriction in hamstrings or shoulders, however, when examined it may be found that there is actually limitation in rotation of the pelvis, causing the problem.