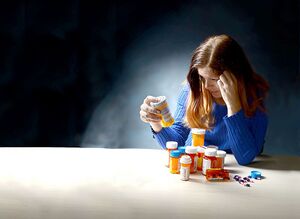 Abuse of prescription drugs has reached an epidemic level

Some prescription drug addicts start with legitimate prescribed for them. eg A patient needing pain medication after surgery. When patients take their medications in ways that go beyond their doctors’ instructions, tolerance and eventual addiction can be the result.

Others become addicted to prescription drugs without ever legally obtaining a prescription. They either buy the drugs on the street, purchase them online, or steal them. Unfortunately, the black market for prescription medications is now growing at an alarming rate. People use them because they are cheap and easy to get.[6]

Signs that go along with prescription drug addiction. These are:

The dangers that go along with prescription drug addiction are very similar to other addictions. Addictive prescription medications have adverse effects on the physical body that directly correlate with the kind of drug being used.

A hidden danger inherent to prescription drugs is the misplaced belief that they are completely safe because doctors prescribe them. What must be understood is that these drugs are classified as prescription only specifically because they are addictive and/or dangerous. The very fact that they are only obtainable through prescription should tell you something. Do not believe the myth that they are less harmful or less powerful.[5]

Physical therapists are not qualified to treat prescription drug abuse, but that does not mean that this is a problem PTs should ignore.  An important part PTs can play is in recognising the signs and symptoms, screening a patient when a problem is suspected, and making sure to ask each patient about all drugs, prescription and over the counter, that they are currently taking.

If you suspect a client has an addiction to prescription drugs advice them to seek help, beginning with them talking with their doctor. They may feel embarrassed to talk about it, but remind them that medical professionals are trained to help, not judge. It's easier to tackle the problem early before it becomes an addiction and leads to more-serious problems[2].