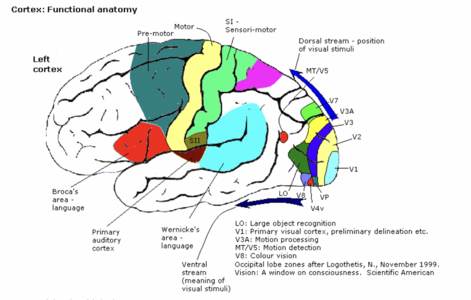 The premotor cortex primarily mainly prepares and executes movements of the limbs, through coordination with other parts of the brain in choosing the appropriate motions.

The premotor cortex appears to play a role in orienting the body and readying the postural muscles for forthcoming movements. This appears to be the case as the premotor cortex mainly projects to the proximal musculature, with efferent fibers from the premotor cortex serving motor neurons of the trunk and shoulders (predominantly) and it receives inputs important for spatial orientation (from the posterior parietal cortex)[3]. It is especially active when motor routines are run in response to visual or somatic sensory cues, such as reaching for an object in full view or identifying an object out of sight by manipulation.

The ventral and lateral areas anticipate and direct the movements of the body in response to external stimuli (eg visual and audio inputs) whilst the medial area responds to internal stimuli from other parts of the brain (eg memories) and acts as a relay station to execute a particular physical act. It is also important in learning, through the practice of imitation, and skills of social cognition through empathy.[1]

Decline in general body physiological system is a challenge that accompanies ageing. One of these challenges is the deterioration of motor functions, and current research points to a change in white matter integrity, which affects cortico-cortical connectivity. A recent study found that a decrease in dorsal premotor cortex connection to the ipsilateral primary motor cortex (M1) may explain a portion of the motor function impairment reported in older persons.[4] 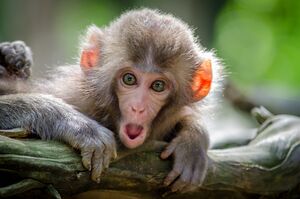 Damage to premotor cortex may result in