Physiological Changes in Girls During Puberty 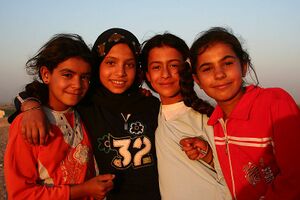 Puberty is a normal, vital, physiological process including a series of normal hormonal changes resulting in changes in gonads (testosterone, aldosterone, and progesterone) and reproductive organs to be functionally mature, resulting in the physical development of sexually mature adults, it is a transition stage between the childhood and adulthood period happens in all normal individuals. This process undergoes different factors; hormonal, genetic, environmental, or even nutritional factors. This period that begins at puberty and ends in early adulthood is named adolescence, ages between 10- 19 as defined by WHO[1].

There is a decrease in the age of puberty in the last century, the age of thelarche (breast development) has been decreased by 3 months per decade since 1977[2], age of menarche was observed to be reduced in US and EUROPE in the last century. This may be undergoing environmental, social, endocrine-disrupting, obesity, or genetic factors[3].

In African America, it begins around the age of 6, and in white girls starts between 8 and 13 years of age. It is considered the spurt of puberty that occurs between 9 and 10 years old. 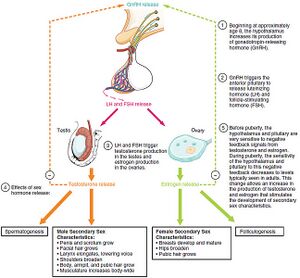 The first changes of puberty are initiated by pulsatile secretion of Gonadotropin-Releasing Hormone (GnRH) neurons of the hypothalamus. GnRH is transported to the anterior pituitary gland (pituitary gonadotropes) resulting in the synthesis and release of LH and FSH  from the gonadotropic cells of the anterior pituitary gland these hormones affect theca and granulosa cells of the ovary in females and affect the Leydig and Sertoli cells in the testes. This is considered the spurt of physical puberty in individuals[5]. The level of circulating LH is much greater than FSH in boys and girls from early pre-puberty to pubertal onset[6].

Then when LH and FSH bind to their receptors in ovaries and testes they stimulate them to release (estrogen, aldosterone, and a small amount of testosterone in females). FSH increases estrogen production from the ovaries, and LH helps to start the ovulation and creation of the corpus luteum in girls. While in boys FSH triggers testicular growth and supports spermatozoa maturation, and LH  increases testosterone production[7].

Secretion of Growth Hormone (GH) from the pituitary gland helps to keep the linear progress of puberty[8].

Early phase (11–13 years): age of middle school when the children start to grow more quickly, it is characterized by puberty and sexual development. They begin to notice their body changes and they may feel anxious or uncertain about their appearance, their interest in family and parents' activities will be decreased, and tends more toward peer relationships.

Middle adolescence (14–18 years): age of the high school, the puberty continues but changes are less common than in the early phase. They start to accept their pubertal changes, and the decreased interest in activities and the distance from parents will peak at this stage and spend more time with friends. Tend to be influenced by negative and risky behaviors. The changes during puberty are heterogeneous between adolescence.

Late adolescence (19–21 years): age of post-high school graduation or college, stage of consolidation of self-discovered beliefs, their relationships will be more stable[9]. 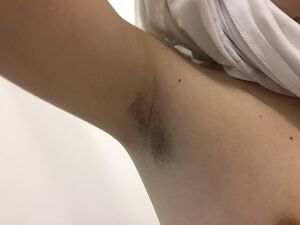 Premature puberty: it starts before the age of 7 or 8 in girls, and before 9 in boys. It may be idiopathic if there is no family history of premature development. It is characterized by  the presence of pubic or axillary hair and this is possibly because of increased sebaceous gland activity without other signs of puberty present.

Premature menarche before the breast development without any other signs of puberty is considered abnormal and thought to be because of transit activity of ovaries or exogenous estrogens[14].

It is a lack of physical signs of puberty about 2 to 2.5, in boys it can reach to be about 4 years. In girls, the absence of breast development by 13 years or more than 4 years between the thelarche and menarche is considered delayed puberty[15]. Chromosomal abnormalities, hypopituitarism, or hypogonadotropic hypogonadism are possible causes of delayed puberty.