Osteosarcoma is also known as osteogenic sarcoma. Osteosarcoma is a malignant primary cancer of long bones. Evidence of malignant osteoid bone and/or cartilage formation with destructive lesions and sclerosis is characteristic of the disease[1]. Differentiating osteosarcoma from other tumors is defined by the production of an extensive and incompletely mineralized matrix that is seen with histological staining[2]. 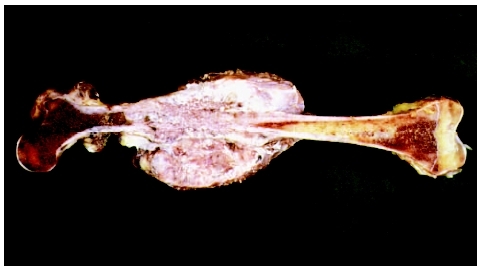 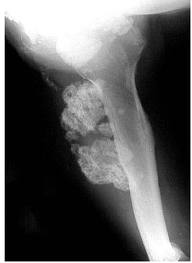 Osteosarcoma accounts for 15% to 20% of all primary bone tumors and is the second most malignant condition of bone. It occurs most frequently in male adolescents and young adults under the age of 30, peaking in frequency during the adolescent growth spurt with another smaller peak in adults over the age of 50.[1] Review of data from the Surveillance, Epidemiology and End Results program of the NCI resulted in an estimate of 4.4 per million new cases of osteosarcoma each year in people aged newborn to 24 years[3]. “The U.S. Census Bureau estimates that there will be 110 million people in this age range in 2010, resulting in an incidence of roughly 450 cases per year in children and young adults less than 25 years old. Osteosarcoma accounts for approximately 5% of childhood tumors. In children and adolescents, more than 50% of these tumors arise from the bones around the knee[3].”[3]

The patient most often presents with pain prior to soft tissue swelling and an enlarging bone mass. This is due to the stretching of the periosteum which usually causes pain before the tumor is detected. Pain could also result from the weakening of the bone and the development of minute stress fractures. The pain may be present for several weeks to several months[1]. The majority of patients with osteosarcoma present with localized pain at the primary tumor site.[3] Range of motion may also be limited as the tumor encroaches upon the joint space.[1]


The most commonly affected bones are the metaphyseal region of long bones such as the:

Although, these areas are most common, osteosarcoma can arise in any bone in the body[4]. Systemic symptoms such as weight loss, pallor and fever are uncommon. The patient may be a tall adolescent, with males presenting more often than females.


Distal locations of the tumor have a more favorable prognosis than proximal sites. “Axial skeleton primary tumors are associated with the greatest risk of progression and death, primarily related to the inability to achieve a complete surgical resection. Pelvic osteosarcomas make up 7%-9% of all osteosarcomas; survival rates for patients with pelvic primary tumors are 20% to 47%.”[3]

Patients with Rothmund-Thomson Syndrome (RTS) have an increased risk of developing osteosarcoma when compared with the general population. They also develop osteosarcoma at an earlier age. RTS is also called poikiloderma congenital, which is a rare autosomal recessive condition[3]. This condition is characterized with skin issues such as atrophy, telangiectasias, pigmentation change, thinning or sparse hair, cataracts, small stature and skeletal anomalies[1].


Among 220 children who were given Ra IV as therapy for tuberculosis, many developed osteosarcoma[7].


Usually, several drugs are given together. Some common combinations of drugs include:
-High-dose methotrexate, doxorubicin, and cisplatin (sometimes with ifosfamide)
-Doxorubicin and cisplatin
-Ifosfamide and etoposide
-Ifosfamide, cisplatin, and epirubicin15 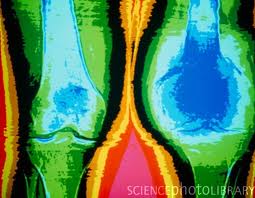 Radiographs - Standard radiographs may present with any of the following characteristics of osteosarcoma:
- medullary and cortical bone destruction
- wide zone of transition, permeated or moth-eaten appearance
- aggressive periosteal reaction
+ Sunburst type
+ Codman’s Triangle – A triangular area of new subperiosteal bone that is created when a lesion raises the periosteum away from the bone.
+ Lamellated (onionskin) reaction - less frequently seen
- soft-tissue mass
- tumor matrix ossification / calcification
- variable: may present with a combination of bone tumor production, calcified matrix, and osteoid

MRI - Uses radio waves and strong magnets to create an image. No radiation is involved in this technique. MRI’s are often performed in order to better define a lesion that was previously identified via radiograph. MRI’s can typically determine whether a mass is a tumor, an infection, or bone damage from a different source.

Bone Biopsy (GOLD STANDARD) – This technique is an invasive procedure that involves surgically removing a piece of a suspected tumor. The removed piece of tumor is then examined, via lab testing, in order to ascertain its exact composition.

Chest CT – Scan used to detect pulmonary metastasis. CT scans are sometimes used to determine whether the tumor has metastasized into tissues adjacent to the lesion.


Nuclear Imaging - Used to aid in the initial staging/metastatic evaluation and response to therapy.

Positron Emission Tomography (PET) Scan – Utilizes a radioactive substance injected into the blood stream. The scan is used to obtain a general image of the entire body. The imaging results can help detect the spread of osteosarcoma cells to other parts/systems of the body.

Blood Tests – Blood tests are not conclusive, but they may be helpful once a diagnosis is made to help determine the stage of cancer. High levels of alkaline phosphatase and lactate dehydrogenase (LDH) may suggest that the osteosarcoma is more advanced.

• The pathogenesis and etiology of osteosarcoma remains obscure
• Chemical agents such as beryllium
• Viruses such as FBJ (which contain the src-oncogene)
• Radiation
• Paget’s disease
• Electrical burn and trauma
• Genetic predisposition: hereditary retinoblastoma

The lungs are most often the first site of metastasis and are also the most common. The articular cartilage is thought to form a natural barrier to direct tumor extension.[9]

• Surgery
- Hemipelvectomy is often required for pelvic tumors[11].
- Approximately 70%-80% of all lesions in this location can be safely treated by a limb-sparing resection[10]
- Amputation is reserved for those patients whose primary tumor is believed to be unresectable
- In limb-sparing surgery the tumor is resected en bloc[10]
- 80% of patients can be treated with limb-sparing surgery without decreasing long-term survival rate 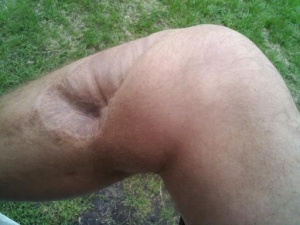 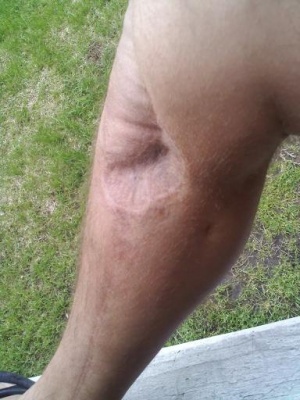 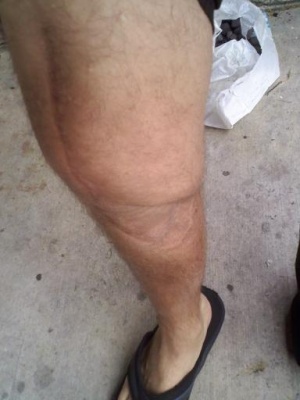 Physical therapy interventions will consist of early postsurgical mobility training, strength and endurance restoration, pain control, and education and training of family members in helping patients with limited mobility. Physical therapists will help to correct balance and coordination impairments, make recommendations for home modifications that will enhance the patient’s independence, and educate and train the family members to assist and enable the patient to function independently. In addition, physical therapists will train the patient in stump management and training with the prostheses for those patients who undergo amputation[3]. Rehabilitation following limb-sparing procedures, rotation plasty, or amputations focuses on retraining muscles, increasing strength and endurance, balance and range of motion as well as helping the patient return to school or work activities. Research suggests that knowledge on the changes occurring in muscle architecture and its impact on long-term impairments in bone sarcoma survivors after limb salvage surgeries can impact treatment outcomes[12].

It is of vital importance for the physical therapist to educate the patient and the adolescent's family inappropriate strength training protocols and precautions of overuse post-discharge with a limb-sparing procedure. The patient will most likely have the long bones replaced with titanium rods and skin grafting procedures. It is also not uncommon to have a total knee replacement if the tumor is located near the distal femur and proximal tibia. These patients are frequently young adolescent males eager to return to full activities and may place their salvaged limbs at risk if they proceed too aggressively at discharge.

The Functional Mobility Assessment (FMA) is a new tool for patients with lower extremity sarcoma. FMA requires the patient to perform functional mobility tasks.[4] Outcome measures such as the L Test of Functional Mobility is the modified version of the Timed Up and Go test designed for people with lower-limb amputations.[5] The Amputee Mobility Predictor is an instrument to assess the ambulatory potential of lower-limb amputees with and without the use of a prosthesis[6]

Currently, there is no evidence or high-quality clinical study to support alternative management of osteosarcoma.