The skeletal muscles are organized multinucleated myofibers, whose function is to generate length and velocity dependent forces for movement or stability. Their function depends on their intrinsic properties and extrinsic arrangement. [1] 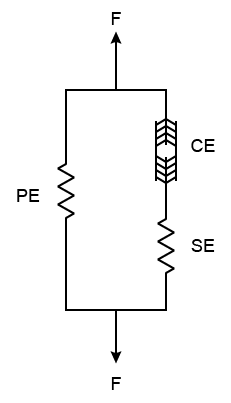 Elasticity is one of the properties of a muscle, necessary for optimal function. These non-contractile components contribute to the passive force generated by the muscles. It is thought that the PEC distributes forces during passive stretching and maintains the alignment of muscle fibers while the SEC serves to store up elastic energy to be released during muscle contraction [4] and play a role in stability during isometric contraction[3]

The ability to stretch muscles (Muscle Compliance) could be explained from the neurological (when considering the neurophysiological basics of muscle tone) and biomechanical models of the skeletal muscle. Intramuscular connective tissue framework (non-contractile components) serves to distribute forces during muscle stretching [5]. It has been shown that an increase in the collagen to muscle fibre tissue exist as well as reconfiguration of collagen arrangements in immobilized muscles [5] suggesting the roles of the biomechanical model in clinical management of muscle stiffness and contractures should be put into consideration in the clinical management of such conditions.

During plyometric exercises, the SEC is known to store up potential energy that is released during the concentric muscle contraction serving as a spring[6] suggesting the role these components play in shock absorption especially during walking. The perception of Delay Onset Muscle Soreness (DOMS) after eccentric contraction is caused by microtrauma to the PEC and the SEC, (Minor SD 1987 as cited by Davies G)[6].

Much focus to the contractile components of the muscles is given in clinical practice, and backed up by neurophysiological models explaining force generation, in consideration of Neuronal drive. Bearing in mind these other components and the role of fiber lengths and cross sectional areas in optimal muscle function is also necessary for clinicians. These provides a better theoretical understanding to the concepts of passive stretching, plyometric exercises, etc. in the management of patients.