Contractures are losses in joint range due to changes in the passive mechanical properties of soft tissues spanning joints[1][2][3].

Movement is essential for maintaining the passive mechanical properties of soft tissues. Animal models show that soft tissues undergo a remodelling process when they are subjected to prolonged immobilisation in a shortened position, leading to a loss of extensibility and length, and subsequently restrictions in joint range[7][8][9][10][11][12][13][14][15]. A study using ultrasound imaging has demonstrated that muscle tendon units and muscle fascicles are shorter at high tension in muscles with contractures in people with brain injury[16].

People without early signs of motor recovery are prone to contractures[17][18][19]. Muscle weakness following acquired brain injury is due to altered neural input secondary to damage to the brain which compromises neuronal recruitment and volitional muscle activation. Muscles can be further weakened through disuse. Severe weakness or lack of muscle activation immobilises a limb and deprives soft tissues of stretch. This predisposes muscles placed in shortened positions to contractures. Similarly, muscle imbalance (resulting from a muscle group being much weaker than the antagonistic group) can place joints in fixed positions and increase the risk of contractures. A number of studies have demonstrated the close relationship between contractures and muscle weakness or related motor deficits such as reduced dexterity, functional ability and mobility. [17][20][21][22][23]

Spasticity, like muscle weakness, can induce contractures by immobilising a limb in a fixed position[1] but the remodelling process is likely accelerated by the chronic tonic contractile activity associated with spasticity[10][24]. Spasticity may further contribute to contractures through an alteration of muscle fibre composition[25][26][27][28][29] and increased cross-bridge attachments[30]. The association of spasticity with contractures has been well documented[3][26][31][32][33][34][35][36][37][38][39]. Soft tissues of hemiplegic patients with spasticity have been found to be nearly three times stiffer than that of the age matched controls[26].

Importantly, it is the interactions amongst spasticity, weakness and contractures that may add complexity to this problem. The theoretical chains of events are illustrated in Figure 1[40].

Figure 1. A theoretical model of events contributing to the development of contractures after acquired brain injury. 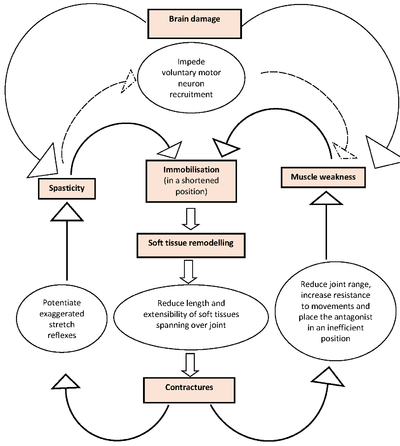 Passive stiffness is a measure of the mechanical properties of a muscle. It can be shown by the passive length-tension property of a muscle, that is, the tension encountered in a muscle at different lengths without any muscle activity[11][12]. Essentially it is the ratio of change in tension to change in length. Stiffness can be presented as the slope of a length-tension curve. Increases in passive stiffness are demonstrated by increases in the steepness of the length-tension curves (Figure 2).

Figure 2. Length/tension curves for a muscle immobilised in a shortened position and comparison is made with that of a normal muscle (control) [11] 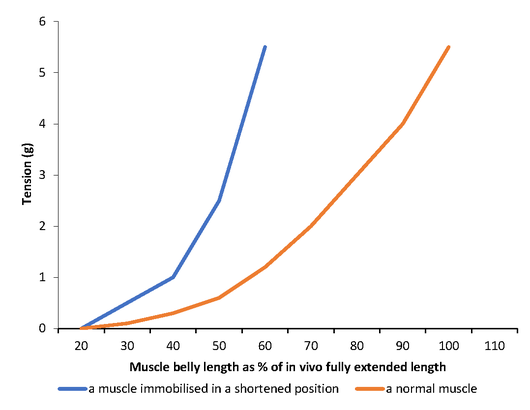 Passive stiffness can also be represented by the slope of the torque-displacement curve of a joint (Figure 3). However, the measurement procedure for this is complex and time-consuming as it involves repeated measurements of passive joint range of motion at various torques or continuous data sampling of both displacement and torque. For practical reasons, clinicians often choose to measure one point on the torque/displacement curve instead, that is, measure passive joint range with a single known torque as illustrated in Figure 3[41].

Figure 3. Torque/Displacement Curve for the Ankle Joint with the Knee Extended 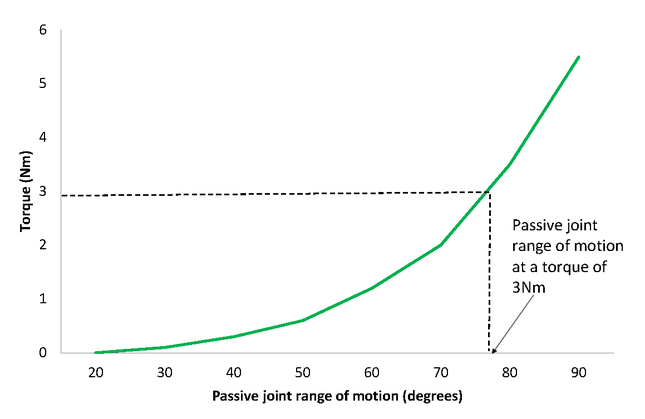 Standardisation of torque is an important consideration when using passive joint range of motion to reflect soft tissue extensibility. It minimises measurement errors associated with uncontrolled torques and altered stretch tolerance of an individual[42][43][44].

Methods to apply controlled torque using a standardised procedure to reliably measure passive joint range to reflect muscle extensibility have been described in a few papers[45][46][47].

The following photographs show some of the equipment and limb position for measuring passive joint range to reflect muscle extensibility:

Passive stretch has been the most widely used method to prevent and correct contractures. The observations that soft tissues undergo structural remodelling and elongate when subject to prolonged stretch underpin the rationale for using passive stretch for contracture management.

A Cochrane review and an abridged republication of a Cochrane Systemic Review indicate that commonly used clinical passive stretch interventions do not produce clinically worthwhile or lasting effects. [48][49] Application duration of passive stretch, however, was short in most of the randomised controlled trials included in the review, with the median duration being 6.5 hours a day over 30 days.

Of the clinically used passive stretch interventions, serial casting provides the highest dose of stretch. Two randomised controlled trials have found serial casting effective in the correction of contractures after traumatic brain injury. [50][51] The effect of serial casting, however, was observed to dissipate within a day and completely disappear after 4 weeks. [50]

Existing evidence does not find passive stretch, as typically applied in clinical settings, produces large or sustained effects for contractures.

Note: The use of stretch over an extended period (such as,the incorporation of 24 hours a day positioning intoa daily routine or splinting for 24 hours a day over months) have not been investigated.

Electrical stimulation, through its effects on improving muscle strength and spasticity [52][53][54][55][56][57][58], is potentially useful for addressing the contributors to contractures.

A randomised controlled trial investigated the use of electrical stimulation (60 minutes a day for 4 weeks) on wrist range of motion as an additional treatment for contracture management in people with traumatic brain injury and stroke. It found no significant treatment effect in joint range. [59]

Another randomised controlled trial found that tilt table standing combined with electrical stimulation (30 minutes a day) and ankle splinting (12 hours a day) over 6 weeks was not more effective than tilt table standing alone on joint range of motion in people with traumatic brain injury. [60]

The addition of electrical stimulation, 30-60 minutes a day over 4 to 6 weeks, to a stretch program does not provide extra benefit to joint range.

A double-blind placebo-controlled study investigated botulinum toxin of various doses for managing upper limb spasticity after stroke or head injury. It found no change in passive joint range of elbow, wrist and fingers. A small increase in range was observed in the elbow at the highest dose (mean 984Mu) but this effect was lost by 12 weeks. [61]

There is no evidence that botulinum toxin alone produces clinically worthwhile or sustained treatment effect on contractures.

Contractures are a complex problem involving multiple contributors, such as spasticity and muscle weakness. Existing evidence has suggested that sole interventions focusing on either reversing soft tissue shortening or addressing the underlying causes of contractures have limited effectiveness. Combining passive stretch with treatments that address the contributors appears a logical and worthwhile approach to consider for contracture management.

Two case studies on severe contractures following traumatic brain injury provided justification for examining a combined approach. One reported no change in joint range using splinting alone but then a long-term resolution of the contractures using serial casting, followed by splinting and motor training. [62] Another case study also reported a large and sustained effect on t range using the same program but adding botulinum toxin prior to serial casting. [63]

A randomised controlled trial investigated a multi-modal program combining serial casting with botulinum toxin, followed by splinting and motor training, on people with severe ankle contractures after traumatic/acquired brain injury. It found a significant treatment effect on joint range immediately following casting, and the improvement was maintained at Week 2 and Week 8. [64] A follow-up study of this trial found that the gain in joint range was maintained at discharge (median follow-up duration: 198 days). This follow-up study also found an association between functional outcome and the long-term improvement in joint range resulting from this program.

A multi-modal program comprising serial casting and botulinum toxin, followed by splinting and motor training can produce lasting benefits for the correction of contractures. People with lesser residual physical impairments or better prospect for functional improvements are more likely to respond well to the program.

There is evidence that supports the principle of using high intensity passive stretch in combination with interventions to address the underlying causes of contractures. Clinicians may consider using a multi-modal program comprising serial casting and botulinum toxin, followed by splinting and motor training or other plausible treatment combinations based on the principle.

5.4 Positioning and Handling - Therapeutic positioning is widely advocated to discourage the development of abnormal postures, contractures, pain, skin breakdown and respiratory complications – all of which are associated with delayed discharge and poorer outcomes. Prevention of these complications in the early stages is an important element in maximising functional gains and quality of life and in reducing the long-term costs of care (NCGS2).

G61 Patients with marked spasticity and/or contractures should have a coordinated plan for interdisciplinary management including:

4.2.1 Splints, Casts , Stretches and Orthoses - Casts, splints and passive stretching may be considered in cases where contracture and deformity are progressive.