This article or area is currently under construction and may only be partially complete. Please come back soon to see the finished work! (7/04/2019)

The population of women with maternal obstetrical palsy are relatively small, hence the absence of the condition in many textbooks[1]. Feasby et al. reported two cases in 1992[1], Katirji et al. had seven (7) women reported in 2002[2]. And some others had nineteen (19) patients in the year 2000. 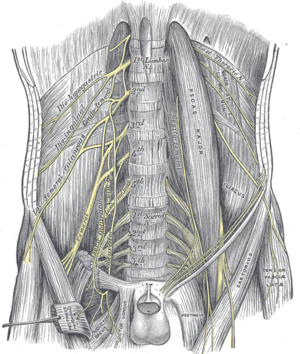 The position of the lumbocsacral plexus predisposes it to compression during prolonged labour, especially in some categories of women e.g. short women. Any trauma, or compression or injury to the trunks of the lumbosacral plexus creates clinical signs and symptoms in the mother. Katirji et al. (2002) concluded that intrapartum foot drop occurs mostly in short women and is caused by lumbosacral trunk compression by the fetal head at the pelvic brim primary pathology being predominantly demyelination and recovery is complete in up to 5 months.[2]

The peroneal nerve is frequently affected and "Hunerman in 1892 attributed its frequency to its position in the lumbosacral plexus."

Types according to research articles reviewed are

Electrodiagnostic studies further describes postpartum maternal lumbosacral plexopathy into Upper and Lower Lumbosacral Plexopathy. Upper lumbosacral plexopathy involves the muscles of the lower limb and affectation to motor and sensory functions, while ,lower plexopathy only involves the lower part of the plexus (s2-s4).Lower postpartum lumbosacral plexopathy is evoked when perineal sensory disturbances whether or not associated with urinary or fecal incontinence persist after a history of a difficult vaginal delivery with no associated lower limb sensory or motor deficits noted[3] "The first, second and third sacral roots entering into the formation of the sacral plexus lie on the piriformis muscle and are thus unprotected against pressure on the bone"[4]

For the upper palsy: pain, paraesthesia, weakness of ankle dorsiflexion, eversion, and inversion, and sensory loss in the L‐5 dermatome, foot drop.

For the lower palsy[3]

Subjective history taking form the patient. Intrapartum palsy would have been observed during parturition.