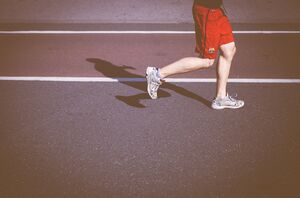 The knee flexors include the set of hamstrings, gracilis, sartorius, gastrocnemius, plantaris, and popliteus. Most of these knee flexors also internally or externally rotate the knee[1]. The hamstring muscles are the primary knee flexors. They play a key role in everyday movements, eg running, walking.

Bending of the knee is known as flexion. The opposite movement is extension. Flexion and extension are controlled by opposing muscle groups. 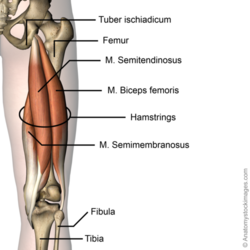 The semitendinosus, semimembranosus, and biceps femoris (long and short heads) make up the hamstring group.

The gracilis and sartorius flex and internally rotate the knee and play an important role in providing stability to the medial side of the knee. They also have roles at the hip. These muscles attach proximally at the hip.

Distally these muscles course posterior to the medial-lateral axis of rotation of the knee, and with semitendinosus form a collective insertion on the proximal-medial tibia, commonly known as the pes anserinus. These three muscles all perform three common functions at the knee: Flexion of the knee; Internal rotation of the knee; Dynamic support of the medial collateral ligament, providing medial stability to the knee

The popliteus helps unlock the knee when the knee is in full extension. The hamstrings don't have much leverage from that position, and the small popliteus is crucial here. The popliteus externally rotates femur on tibia, the locked ligaments loosen, and hamstrings can then flex free[2]

Flexion Deformity of the Knee