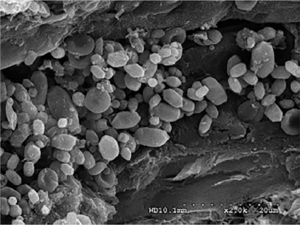 Benign paroxysmal positional vertigo (BPPV) is the most common cause of vertigo arising from peripheral vestibular disorders. It accounts for 20 to 30 percent of all patients seen for vertigo in clinics that specialise in dizziness.[1] While the overall incidence of BPPV in the general population is around 2.5 percent,[1] it is more common in older adults. Some studies show that 50 percent of older adults have BPPV.[2] 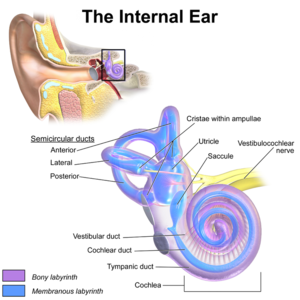 BPPV is a biomechanical problem that occurs when there is displacement of calcium-carbonate crystals or otoconia from the utricle into one of the three fluid-filled semicircular canals of the inner ear (see Figures 1 and 2).[3][4] This causes the semi-circular canal (or canals) to be inappropriately excited, resulting in vertigo, nystagmus and occasionally nausea.[3] For more information on the anatomy of the vestibular system, please click here.

Symptoms tend to be provoked by head movements, such as:[3]

It is not yet known what causes BPPV. The majority of cases are idiopathic[5], but it is more likely to occur in older adults.[2]

The two primary theories about its aetiology are that it is:

Two variants of BPPV can be present:

The key characteristics of these two variants of BPPV are summarised in Table 1. 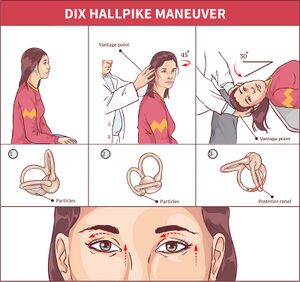 The Dix-Hallpike (DH) test is used to assess BPPV (primarily the vertical canals). This test enables the therapist to identify the side of the lesion and frequently the specific canal involved (see Figure 3).[3]

Kaplan and colleagues have found that shaking the head during the DH increases the diagnostic yield. Patients who have a negative DH, but a positive result when head shaking is introduced may have otoconia that are not moving well through the affected canal.[13]

If BPPV is likely present, but the DH is negative, this test can be repeated a couple of times to ensure that it is negative (in cases of “sticky canalithiasis”). [3]

It is important to try to assess the unaffected side first if possible. You can reason which side this might be based on the patient’s subjective report - i.e. the side she / he does not like to lie on. However, often the patient will not be able to tell you which side is worse.[3]

This test is a valid alternative that can be used when the DH is not considered a viable option (e.g. if there are range of motion limitations).[15]

The head roll test can be used to assess the horizontal canals as it places these canals in the plane of gravity. It is considered a positive test when:[3]

There are two types of nystagmus associated with the horizontal canals and they can be used to differentiate between cupulolithiasis and canalithiasis: [12]

It is possible to distinguish central nervous system lesions with BPPV (see Table 3). Lesions of central origin often present with:[3][12]

The manoeuvre is performed as follows:[3]

The Gans manoeuvre is a modified Epley manoeuvre. It is performed as follows (assuming the right side is affected:[3]

The Epley manoeuvre is a safe and effective treatment for posterior canal BPPV (the most common variant) It can be effective for anterior canal canalithiasis as well, but it is not effective for horizontal canal canalithiasis or anterior, posterior or horizontal cupulolithiasis.[3] It has no serious side effects, but there is no evidence that it provides long-term resolution of symptoms and recurrence rates are high.[19] The Gans manoeuvre has been shown to have similar outcomes as the Epley.[19]

The Gans manoeuvre was developed because certain aspects of other BPPV manoeuvres, such as hyperextension of the neck during the Epley, are contraindicated for patients with vertebrobasilar insufficiency, cervical spondylosis, back problems etc.[23] Roberts and colleagues assessed the efficacy of the Gans manoeuvre and found that:[23]

There are two key treatments for horizontal canal canalithiasis:

To perform this canalith repositioning treatment:[3]

Nuti and colleagues compared these two techniques for horizontal canal canalithiasis with an untreated control group.[25]

Both treatments had similar remission rates:[25]

A more recent study by Wang and colleagues also supports the use of the barbeque roll.[26]

To treat anterior canal BPPV with the liberatory (semont) manoeuvre, the manoeuvre is similar, but the patient’s head is turned to the affected side to begin:[3]

Semont and colleagues found that in 711 patients with BPPV there was complete remission in 84 percent of patients after one treatment and 93 percent after a second procedure one week later.[28]

The modified semont manoeuvre can be used to treat horizontal canal cupulolithiasis.[30] It is performed as follows:[3]

This modified semont manoeuvre was found to result in resolution of symptoms for 77.8 percent of patients with horizontal canal cupulolithiasis after three sessions.[3][30]

The efficacy of these treatments for BPPV are summarised in Table 4.

To perform these exercise programme, patients are instructed to:[3]

NB patients are advised they can stop the exercise when they have two consecutive days with no symptoms or if there has been no improvement within 2 weeks.

Brandt and Daroff studied the effectiveness of these exercises on a series of 67 patients with BPPV. They found that after 3 to 14 days of exercises, 98% of the subjects had no symptoms of BPPV.[31] More recent studies have also found these exercises to be effective.[32]

Clinically, however, this exercise programme often requires a prolonged period of time for patients to experience an improvement in their symptoms.[3]

A daily routine of self-canalith repositioning exercises does not affect the time to recurrence or the rate of recurrence of posterior canal BPPV.[35] Patients should not, therefore, do the Epley manoeuvre as a home exercise to prevent recurrence of BPPV. [3]

It has been found that there is an association between the ear affected by BPPV and the preferred head-lying side during sleep onset. Moreover, there are higher recurrence rates of BPPV in patients who sleep on their affected side.[36][37][38] Patients may, therefore, want to change or vary the side they sleep on sleep on if BPPV is recurring.[3]

During treatment of posterior semi-circular canal BPPV, debris may move from the posterior canal to the horizontal canal (usually) or to the anterior canal (rarely – 2.9%).[39]

This will be obvious when a DH retest results in dramatically different nystagmus patterns after an Epley manoeuvre has been performed. If this occurs, it is necessary to re-evaluate and treat the newly involved canal.[3] The Epley manoeuvre may have a higher rate of conversion than the liberatory manoeuvre.[40]

What Happens to the Otoconia?[edit | edit source]

A number of theories have been proposed to explain where the otoconia go after repositioning techniques, including:[3]