Hip displacement is very common in children with cerebral palsy (CP) and the incidence has been reported to be 35%[1][2]. It is directly related to the child’s Gross Motor Function Classification Scale (GMFCS) level with a reported incidence of between 68-90% for children in GMFCS Level IV and V[1][3]. Progressive hip displacement can cause severe pain. In a recent study examining hip health at skeletal maturity in 98 young adults with CP, hip pain was reported in 72% of participants and pain frequency and severity increased with worsening hip morphology[4]. It can also lead to difficulties with positioning, sitting, standing and walking and negatively impact quality of life[5][6][7]

Muscular imbalance around the hip has been proposed as one possible cause of the lateral displacement. Yildiz et al (2014) suggest that hyperactivity of the hip flexors and adductors are contributing factors[8]. In addition the combination of femoral neck-shaft angle and femoral anteversion contributes to the risk of hip displacement[7]. A clear relationship between GMFCS level and hip displacement has been established. Children with greater functional loss (GMFCS levels IV and V) are at a highest risk[1][3][9][10]. Age is also a factor. Hagglund et al (2007) reported that the most common age of displacement in their population was 3-4 years and some were as young as 2 years9. Progression of hip displacement has also been reported after puberty and progression and dislocation has occurred after skeletal maturity, the latter happening in the presence of scoliosis and pelvic obliquity[10]. It appears that topography and movement disorder are poor predictors of hip subluxation[10].

Hip surveillance programmes have been established in many countries in order to identify and monitor those children at risk for hip displacement. There have been reports of a significantly decreased incidence of hip dislocation as a result of these programmes[10]. Two that are cited frequently are The Cerebral Palsy Follow-Up Programme (CPUP)[9] which was established in Sweden in 1994 and is currently being used in all or parts of Denmark, Iceland, Norway and Scotland and the revised Australian Hip Surveillance Guidelines for Children with Cerebral Palsy[10].While hip surveillance identifies those children with progressive displacement it does not dictate the type or timing of intervention[10].

Diagnosis is by x-ray as a clinical examination alone in insufficient to evaluate hip displacement[7]. Reimer’s migration percentage (MP) is the most common measure used to examine the amount of lateral displacement of the femoral head[11]. Hips presenting with MP >30% are considered to be displaced and hips with an MP > 90%-100% are dislocated[5] . Progression of the MP greater than 7% per year is considered to be worrying[7].

The clinical examination is often the responsibility of the physiotherapist. It can include but is not limited to
• assignment of GMFCS and FMS (Functional Mobility Scale) levels
• assessment of

The CPUP programme has evaluation forms for physiotherapists and occupational therapists that can be down loaded from the website. www.CPUP.se

Physiotherapists have proposed and examined standing programmes for children at risk of hip displacement. Pountney et al (2009) investigated the effectiveness of early postural management programmes in 39 children with CP[12]. The programme included a standing support (in addition to sitting and lying supports) and children were monitored from 18-60 months using x-rays. They found that those children who used the equipment at the recommended frequency had significantly less chance of both hips being subluxed than those using the equipment at minimal levels. It is difficult to tease out the relative contribution of the standing programme to these results. Martinsson et al (2011) examined the effect of one-year, one and a half hour/day straddled weight-bearing on MP in 14 children with CP who were non ambulatory[13]. They reported a reduction of MP and preservation of PROM compared to controls. However they cautioned that because the number of children in the study was small further studies would be required to confirm the results. A more recent study examined a standing programme in 26 children with CP, GMFCS level III. Half the children stood in an individually fabricated standing frame with hips in 60 degrees of abduction for 70-90 minutes/day. The programme started when the child was 12-14 months and continued until 5 years of age. They report that the MP of those who stood remained stable at 5 years (13-23%) versus controls (12-47%). A recent randomized controlled trial examined the use of Botulinum toxin A combined with bracing in 90 children with CP and concluded that it was not effective in preventing hip displacement[14]. 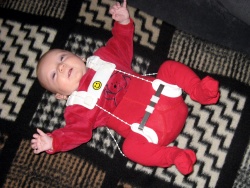