Infants transitioning to toddlerhood start using their hands in more complex ways. In early infancy, hand use is subjected to random spontaneous movements of the arms. But as they age, infants engage in intentional movement patterns to reach for and grasp objects that they seek.[1] Successful reaching requires an infant to locate the target while opening and aligning the hand in preparation to grasp the object. Developmentally, reaching precedes grasping.[2] Between 9 and 19 months old, infants can plan ahead before reaching a target.[3] During this period, reaching and grasping are not limited to visual targets as infants can reach for auditory targets as well.[2] Throughout the 7 to 24 month period, infants will use their hands in a variety of ways. They also use different finger grasps to learn about, manipulate, and play with objects.[1]

There are two important ideas to keep in mind when considering the development of hand function: cascades in development and perception-action loops with embedded exploration and selection.[1]

It is an active process where the brain recognises patterns from the steady flow of sensory information. Examples of the perception of sensory information include tasting, feeling, looking and listening. For infants, hand use provides opportunities to learn about the properties of objects through touch.[1]

Hands serve several purposes during the 7 to 12 month period:[1] 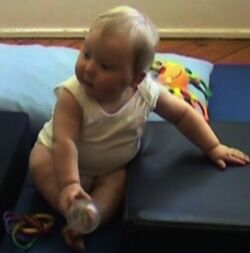 During the 7 to 12 month time period, infants will use their hands to interact with objects using various complex actions. Hand-object behaviours include:[1]

** By 12 months, an infant's reach and grasp motions are similar to that of an adult[4]

When infants learn to sit independently, they become more efficient at reaching and grasping as their arms are no longer needed for support. Their grasp transitions from a reflexive palmar grasp to a radial palmar grasp to a pincer grasp. These fine motor adaptations facilitate more detailed manipulation of, and play with, objects. Using new grasps, infants begin releasing objects awkwardly at around 7 to 8 months. This becomes more purposeful as they age. By around 12 months, infants use fingering and hand-to-hand manipulations to investigate objects.[5] Repetitive trials allow them to find a finger pattern that is best suited to the size and shape of different objects.

Grasp patterns commonly seen during this period include:[1][6] 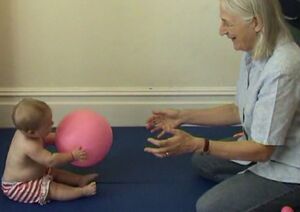 Ball play in infancy creates a variety of experiences to help infants learn how balls function. Infants learn to visually track moving balls as well as predict where the ball will stop moving. Anticipating the future location of a moving ball is an important skill for learning to catch a ball. Ball play with a partner allows infants to observe their partner's actions, discover different ways balls move, and how to catch and throw.[1]

During the 7 to 12 month period, infants use their hands for social interaction and communication. Some of the gestures you might see during this stage are listed below:

During the 12 to 24 month stage, toddlers use their hands for more goal-directed actions.[1] Their improved visual perceptual and spatial relation skills contribute to their improved ability to manipulate objects and use both hands at once.[5] Goal-oriented tasks require an understanding of the series of actions needed to complete the task (this is otherwise known as task structure). The three main components needed to complete a task structure are listed below:[1]

Toddlers learn to perform tasks with greater accuracy over time and through repeated experiences. During play activities, toddlers will adapt their grip, their body position and the pulling force applied through their arms to accommodate for the specific task. They quickly learn how to plan, execute and adapt their movements to attain their goal.[1] 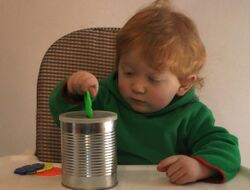 Posting or inserting activities begin when infants are aged between 12 and 24 months. This task requires the toddler to place objects through small openings such as small balls, rods or flat discs inserted into holes in the lids of a container. Through this undertaking, toddlers learn about sizes and shapes of objects as they fit through the various holes.[1]

Toddlers aged between 12 and 24 months have brief sustained periods of focused attention on a task before moving onto another activity. These quick bursts of focused play are not a sign of a poor attention span, but rather they are an indication of toddlers employing their time in the most effective way to learn about the properties and affordances of many objects. "Affordance is defined as what the environment offers the individual and what it provides or furnishes."[7] A study by Herzberg et al.[8] showed that toddlers' object interactions were on average 9.8 seconds with transitions among dozens of toys and non-toys.