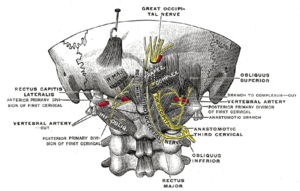 The occipital nerves are a group of 3 nerves that arise from the C2 and C3 spinal nerves.

The Greater Occipital Nerve (GON) is the biggest purely afferent nerve that arises from the medial division of the dorsal ramus of the C2 spinal nerve. It runs backward between the C1 and C2 vertebrae and traverses between the inferior capitis oblique and semispinalis capitis muscles from underneath the suboccipital triangle. While traveling to the subcutaneous layer, the GON is found to pierce the semispinalis capitis muscle bilaterally[1]. Then it perforates the aponeurotic fibrous layer of the trapezius and the sternocleidomastoid[2] to travel to the scalp and the superior nuchal line[3].

This complex involvement with the nearby musculature may make this nerve a potential source of nerve compression, entrapment, or irritation[4].

Some anatomic variations should be noted by physicians to understand better the topography of the GON and the nearby vasculature.

This connection between the GON and the occipital artery may be useful in patients with migraine or occipital neuralgia[5], as many of these patients report having pulsatile symptoms, and their headaches may contain a vascular component.

The occipital nerves mainly carry sensory fibers. In particular the GON innervates the skin of the back of the scalp up to the vertex of the skull, the ear, and the skin just above the parotid gland.

The GON constitutes the main sensory afferent nerve through the C2 root, and this afferent input is directly relayed to the C2 dorsal horn.

The symtpoms of an occipital neuralgia could dissimilate red flags. Before treatment is needed to assess:

Other conservative treatment options consist of correction of posture to decrease the compression from sub-occipital muscles and the trapezius and reducing muscle pain. The change of maintained posture on computer, for example, could relax the muscular activity of the sub-occipital muscles and prevent an occipital nerve entrapment. Pauses from the sitting position and self-mobilization of the cervical spine can also be useful.

Dry needling therapy could also been considered as conservative approach in patient with occipital neuralgia[11].

The manual therapy oriented to mobilisation and manipulation of the neck can also be considered as a conservative treatment, expecially if associated to a exercise program to the muscles of the neck[12]. Strengthening exercises[13] [14]including deep neck flexors and upper quarter muscles. For more indication for physical therapy management please see Cervicogenic Headache.

If patients do not respond clinically to these treatments or minimally invasive procedures, other invasive treatments, such as nerve blocks or neurotomy, may be considered.