With millions of people displaced, the Intergovernmental Panel on Climate Change (IPCC) noted that human migration could be one of the greatest single impacts of climate change. [1] Why do we talk about climate Migrants and not about Climate Refugees ? On one hand, refugee is clearly defined in the International Law as “a person who owing to a well-founded fear of being persecuted for reasons of race, religion, nationality, membership of a particular social group, or political opinion, is outside the country of his nationality, and is unable to or, owing to such fear, is unwilling to avail himself of the protection of that country”. [2] In another hand, The International Organization for Migration defined climate migrants as “Environmental migrants are persons or groups of persons, who, for compelling reasons of sudden or progressive changes in the environment that adversely affect their lives or living conditions, are obliged to leave their habitual homes, or chose to do so, either temporarily or permanently, and who move either within their country or abroad”.[3]

There are multiple reasons why people need to move due to climate issues: temperatures, sea levels, accessibility to clean water or food, extreme weather events and many more. The United Nations Human Rights Council (UNHRC) noted that “80% of the world’s displaced people are in countries affected by acute food insecurity”. Every country is at risk of climate migrations, but egaly exposed. There is major risk for countries with a lack of capacity adaption when it comes to access to resources and for countries with higher exposure to hazardous events. In general, low and middle income countries are at higher risk. 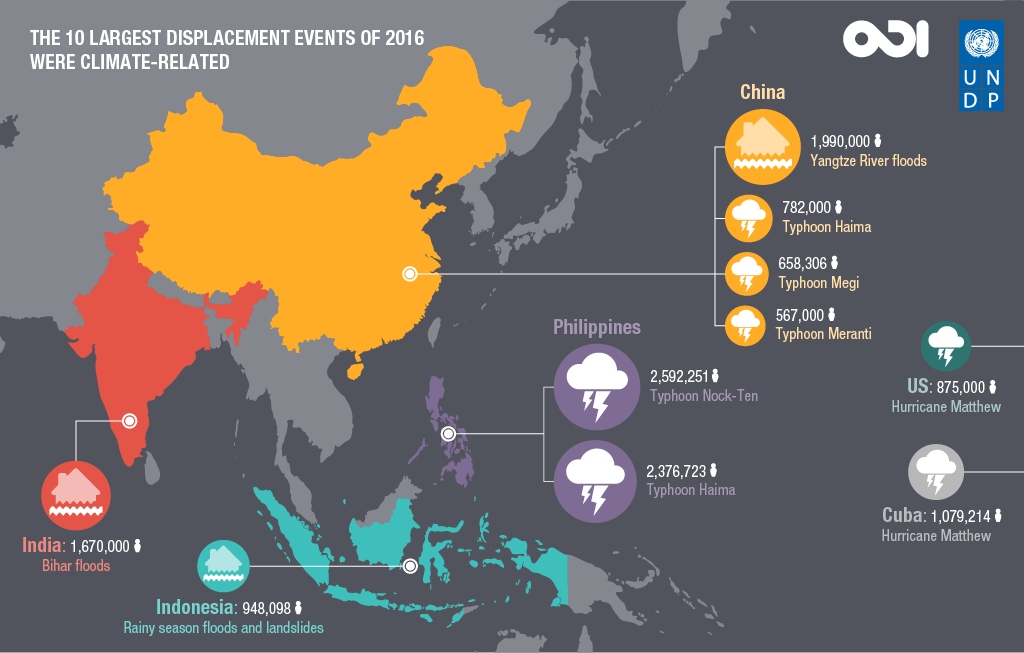 Climate migrations due to an environmental issue like sea level rise are rare. People are directly pushed to move due to climate only during extreme weather events. In other cases, there is on association between climate condition and social and economic issues. It is a long and subtle modification in people's lives.

It’s hard to put a number on how many people are moving due to environmental conditions. The UNHRC has data about global migration and estimates 79.5 million people worldwide to be forcibly displaced in 2019, and estimated it around 21.5 million people each year since 2008 due to climate change. It is hard to evaluate how many people will be affected by climate change and how many will have to migrate due to environmental situations. The impact of climate change on forced migration will depend on “the quantity of future greenhouse gas emissions, the rate of future population growth and distribution, the meteorological evolution of climate change, the effectiveness of local and national adaptation strategies”. However, 200 million by 2050 is an accepted figure. Nevertheless it is important to realize that climate migrants are not always crossing borders. Actually it affects people inside their own countries before migration leads to another country. We talk about internal displacement.

Comparative Analysis of Refugee Populations from Different Countries and How this may Change.

The UNHCR noted that 68% of the total displaced people came from just 5 countries: Syria (6.6M), Venezuela (3.7M), Afghanistan (2.7M), South Sudan (2.2M) and Myanmar (1.1M). Furthermore 85% are hosted in developing countries such as Turkey (3.6M), Colombia (1.8M), Pakistan (1.4M) and Uganda (1.4M). In conclusion, 1% of the world’s population is displaced. Migration can be an adaptation strategy for countries and people if it is supported by good development policies and investments.

Internal climate migration could reach 143 million by 2050, in only 3 regions of the world (Sub-Saharan Africa, South Asia and Latin America). This number is based on the worst scenarios of the Fifth Assessment Report of the Intergovernmental Panel on Climate Change (IPCC). In the best scenarios, this number could drop to 65 million. Furthermore, internal climate migration might accelerate after 2050 “due to stronger climate impacts combined with steep population growth in many regions.” [1]. Internal and International climate migration might create hotspots of climate-induced migration. Those hotspots apply to in- and out- migration. Hotspots are a real concern for government and countries development.

Some common trends seems to emerge regarding the magnitude, scale, and direction of climate migration:

Evolution shows us that climate migration is very intertwined with a country’s development context. Climate migration will be worse in countries with high population growth, economic inequality, high urbanization, and lower education for their population. Under a climate-friendly scenario the average number of climate migrantes is cut by at least half by 2050 and this is for every region. [4]

Climate migrants and refugees may present different affection from the usual population. It is up to the physiotherapists’ duty to be able to provide adequate care for every patient.

The first major barrier could be language. Even if a lot of climate migration is an internal migration, it is always possible to face a foreigner patient. Physiotherapists must adapt their training to be able to take care of people speaking another language. English is a well known language, but everyone doesn't know it. It is important for every physiotherapist to be able to communicate properly with every patient.[5]

Facing climate migration countries and their health system need to take anticipatory actions. This process is a long-term approach on how to insure good care for internal and international migrants. To be able to face this challenge, every health profession will have to be involved. We need global action. [6]

The purpose of this book is to suggest concrete ways in, which the international community can begin to address the huge gaps in our knowledge relating to the likely impact of climate change on migration. The book does this by taking stock of the existing evidence on the effects of climate change and environmental degradation on migration, providing a comprehensive overview of the findings of recent research studies. Throughout, our focus is centred on how research can best inform policy and provide the evidence which decision-makers will need in the future to plan for and respond to environmentally induced migration.

This report brings a much-needed focus to the nexus between climate change, migration and development in three regions: Sub-Saharan Africa, South Asia and Latin America. Its startling conclusion is that they may have to cope with more than 143 million internal climate migrants by 2050 unless concerted action is taken at the national and global levels.