Functional Anatomy of the Hip - Neural and Vascular 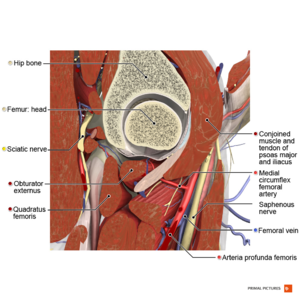 Hilton's law states “The same trunks of nerves, whose branches supply the groups of muscles moving a joint, furnish also a distribution of nerves to the skin over the insertions of the same muscles; and – what at this moment more especially merits our attention – the interior of the joint receives its nerves from the same source.” [1]A joint tends to be innervated by a branch of a motor nerve which also supplies a muscle extending and acting across the joint, another branch of the nerve often supplies the overlying skin. 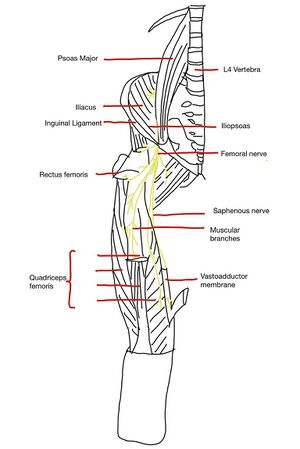 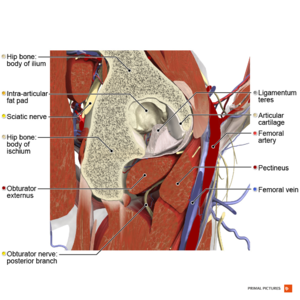 Arterial supply of the hip joint is by the cruciate and trochanteric anastomoses supply. A branch from the posterior branch of the obturator artery may also be present in the ligamentum teres.

Avascular necrosis of the hip is a condition characterized by the death of the femoral head due to disruption of its vascular supply, mainly by Medial Femoral Circumflex Artery. It leads to insidious onset of hip pain, usually with movement, and can be the result of a variety of factors. Some of the most common causes can be remembered by the mnemonic “ASEPTIC”:

The neurologic injury usually is associated with traumatic dislocation and fracture-dislocation of the hip. The sciatic nerve, usually the peroneal branch, is most often injured, and this complication can be seen after all types of posterior fracture-dislocations and simple posterior dislocations. The sciatic nerve can be acutely lacerated, stretched, or compressed, or later encased in heterotopic ossification. Neurologic examination at the time of injury often is difficult but is extremely important. Rehabilitation of patients with sciatic nerve injury must begin as early as possible and should focus on the prevention of an equinus foot deformity. [10]

Intramuscular injection is one of the complications and the sciatic nerve is the most frequently affected nerve, especially in children, the elderly and underweight patients. The neurological presentation may range from minor transient pain to severe sensory disturbance and motor loss with poor recovery. Management of nerve injection injury includes drug treatment of pain, physiotherapy, use of assistive devices and surgical exploration. Early recognition of nerve injection injury and appropriate management is crucial in order to reduce the neurological deficit and maximize recovery. If the injection has to be administered into the gluteal muscle, the ventrogluteal region (gluteal triangle) has a more favourable safety profile than the dorsogluteal region (the upper outer quadrant of the buttock).[11]

The gluteal skyline test: It is performed with the patient in the prone position and the examiner standing at the patient’s feet. At rest, an atrophied gluteus maximus will appear flat compared to the contralateral side. The patient is then asked to contract the gluteal muscles; the affected side may demonstrate less activation or less muscle bulk when compared directly with the other side. A positive test suggests pathology involving the inferior gluteal nerve, L5–S2 nerve roots, or gluteal inhibition. This test may be done concurrently with manual muscle testing (MMT) of the gluteus maximus in the prone position.

Modification of the binary grading scale accounts for the nuances of nerve tension tests, such as the enhanced sensitivity of putting the peripheral nervous system on slack and tautness.

The Lasegue test, also known as the straight-leg raise (SLR) test is used to detect lumbosacral radicular disease. The patient is positioned in supine lying, with the examiner passively raising the athlete's leg off the table, completing a passive range of motion into hip flexion. If this procedure reproduces the patient's symptoms, especially if the pain is elicited between 20 and 70 degrees of hip flexion, this test is deemed unequivocally positive. There is insufficient stress early in the SLR to produce root tension, but nerve tension develops as hip flexion increases from 20 to 70 degrees. Pain that occurs above 70 degrees is more difficult to diagnose because it could be caused by hamstring tightness or even sacroiliac joint pain.

The Braggart test: It is a variation of the SLR, uses an increase in sciatic nerve tension to cause stress on symptomatic nerve roots and elicit radicular pain. An SLR is performed as mentioned above; then, at the point in hip flexion where radiating pain is reproduced, the lower limb is lowered to a point where the patient reports relief of pain. At this angle of hip flexion, the examiner dorsiflexes the ankle on the tested limb. A positive Braggart sign is a reproduction of the reported pain with this dorsiflexion due to increased tension in the sciatic nerve with the manoeuvre. If the common peroneal nerve is specifically examined, the SLR can be modified such that the end position is hip flexion to approximately 70 degrees, hip internal rotation, and the ankle in plantar flexion and inversion. This summation of positions should elicit pain in the sensory distribution of the common peroneal nerve. If the tibial nerve is specifically examined, the SLR can be modified by adding ankle dorsiflexion/eversion and toe extension to produce maximum stretch of that nerve.

The FAIR test stresses the sciatic nerve as it passes by the piriformis muscle. The patient is placed with the examined lower extremity in a position of combined hip flexion/adduction/internal rotation (FAIR).

Athletes rarely show the true "hard" findings of vascular injuries, such as pulsatile bleeding, dilated pulsatile hematoma, cyanosis, hypothermia, nausea, and thrills. The "five Ps" of arterial insufficiency and compartment syndrome are also rare and include pain in passive stretching of the affected muscle compartment, lack of pulse, paresthesia, pallor, and paralysis. The main clinical features between arterial flow arrest due to direct arterial lesions and arterial flow arrest due to venous obstruction are the presence of oedema and cyanotic rather than pale in the presence of severe venous obstruction. It is an appearance. When an arteriovenous fistula occurs, it may be associated with a large dilation of the distal superficial vein, as the arterial flow diverges into a dilated vein. These difficult discoveries require urgent vascular surgery advice.

‘"Soft’’ findings of vascular injury are more common in athletes. They include an asymmetrical pulse, isolated peripheral nerve injury, and a large nonpulsatile hematoma. A prolonged capillary refill is another soft sign of vascular injury that attempts to test distal perfusion but may be nonspecific and unreliable. The leg can be palpated for tenderness and tension that might suggest a compartment syndrome. Athletes suspected to have vascular injury need to be monitored and examined periodically as the injury may take time to manifest. Palpation of pulses assesses for symmetry and strength.

There is usually no palpable pulse in the venous system due to their low-pressure state. Palpation should focus on identifying a possible hematoma or tenderness suggesting direct injury. In the event of thrombosis, the distal lower extremity may display a generalized tenderness to palpation. The venous system is a low-pressure system of thin-walled vessels that transport blood from the periphery back to the heart to complete the cardiac cycle. Their superficial location may make them more susceptible to injury during athletic injury; it also frequently makes them superficially visible in a lean athlete.

Palpation of hematomas may reveal pulsations. The examiner may palpate for tenderness, tissue fullness, compartment tightness, a palpable thrill, and especially pulses. However, he or she must be aware that the presence of a pulse does not ensure adequate blood flow as a pulse may be transmitted via multiple mechanisms including through a clot or a flap. Also, a clot distal to the site of palpation may allow palpation of a pulse but may impede blood flow beyond that point. Further auscultation of arteries can provide evidence of bruits.

Capillary refill test: It can be performed by applying pressure to the nail bed or the hypothenar eminence. Refill is delayed or abnormal if the colour (pink) does not return within 2 seconds after releasing the pressure. With the patient supine, the distal phalanx of one of the toes is compressed for 5 seconds to cause local blanching. The normal colour should return within 2 seconds for adult men and within 3 seconds for adult women. Chronic vascular lesions may lead to chronic skin colour changes, skin mottling and ulcerations, different hair patterns, and nail bed changes. Once again, comparison to the contralateral, asymptomatic side is crucial.

Vasoconstriction (often from exogenous cold temperature) can present as pallor, rubor, cyanosis, and excessive sweating of the hands. The neurologic examination in the setting of arterial injury demonstrates a typical progressive pattern with light touch sensation being lost first, followed by complete anaesthesia, and ultimately loss of motor function. However, if arterial structures are injured distally, the patient often has preserved distal motor function as the muscles responsible for this motion are located proximal to a distal lesion.[13]