The current estimation is that 1 in 259 females and 1 in 813 males are carriers of the FXTAS premutation gene [3]. The occurrence of female carriers who go on to develop the syndrome is only 4% (very low compared to male carriers), however, this rises to 8% in female carriers older than 50 [4]. In addition, the overall presentation of symptoms is less severe in female patients with FXTAS than it is in males [1]. Out of the male carriers of the gene, 17% in their 50s, 38% in their 60s, 47% in their 70s and 75% in their 80s will develop symptoms [4]. The average age of onset is 60.2 (+/- 7.2), however, a greater number of CGG repetitions are associated with an earlier age of onset of symptoms [1].

The most significant risk factor for FXTAS is possessing the fragile X (FMR1) gene mutation [1]. Patients with a family history of fragile X or who are known to have the FMR1 premutation carry a high risk of developing symptoms [1]. Males are also at increased risk, as the disease is far less prevalent and less severe in females [1]. Cognitive deficits are not present in all carriers, however, age and repeat size are positively correlated with executive function deficits, the predominant cognitive dysfunction [5].

The clinical presentation for FXTAS is non-specific which causes this syndrome to be under-diagnosed [1]. Common symptoms in FXTAS patients are intention tremor and ataxic gait, as well as parkinsonism, neuropathy cognitive decline (executive function deficits and dementia) and psychiatric features [1][3]. Unlike the full mutation, fragile X syndrome, individuals with FXTAS will most commonly have normal intelligence [3]. Some patients (approximately 25%) will have physical deformities and emotional difficulties [3].

Female patients with FXTAS will often have a slightly different presentation than male patients. Premature ovarian failure is a clinical symptom reported in approximately 20% of women with FXTAS [3]. Females are also more likely to develop mental health problems including depression and anxiety as a result of this syndrome [1]. Male carriers, however, are more likely to develop severe motor deficits, social difficulties and obsessive thinking [1].

Cerebellar ataxia and intention tremor are the principal characteristics of FXTAS; these are the most pronounced and often first noticed symptoms, especially in men who developed symptoms over the age of 50 [1][2]. With cerebellar ataxia, patients exhibit a slow gait that involves lurching and difficulty with tandem stance [1]. Intention tremors are the most common type of tremor in FXTAS patients, although sometimes a resting tremor will develop [1]. Other symptoms are variable and can include parkinsonism, autonomic dysfunction, lower limb muscle weakness and peripheral neuropathy [3]. Peripheral neuropathy leads to reduced reflexes and decreased sensation of vibration in the lower limbs [1].

Specifically, the most commonly reported symptoms are - gait difficulties, impaired fine motor skills, writing impairments, muscle weakness, Urinary Incontinence, and numbness and pain in the lower extremities [3]. FXTAS is also associated with cognitive deficits; in the initial stages, patients may experience a reduction in working memory and executive functions [1]. More advanced cognitive deficits are often interpreted as dementia in the later stages [1]. Changes in behavior and personality may also occur [1].

FXTAS can be diagnosed using a combination of clinical and radiological (MRI) signs, or by neuropathological analysis of brain tissue [6]. The following table summarizes the common symptoms used for diagnosis of FXTAS [6].

*The MCP sign is seen in T2 MRIs where high resonance appears at the middle cerebral peduncles [1].


A definite diagnosis of FXTAS requires radiological/neuropathological investigation, and therefore cannot be diagnosed by a physiotherapist using clinical symptoms alone [6]. A diagnosis of FXTAS may be considered definite, probable, or possible based on the following definitions [6].


A patient can be diagnosed with definite FXTAS if the following is present:

A patient has probable FXTAS if the following is present:

A patient has possible FXTAS if the following is present:

Propanolol (beta-blocker) and Primidone are commonly used to treat essential tremor (ET) and are the most likely contender to treat tremors in FXTAS [4]. Due to the lack of controlled studies on FXTAS, literature about ET treatment is used as a guide.
Botolinum Toxin (BTX) has recently been used on a trial basis with an FXTAS patient who had a disabling arm tremor [4]. The patient experienced significant functional improvement, with the most benefit being 4-6 weeks after injection and lasting on average three months [4]. Further research with controlled trials is required. In controlled trials of BTX being used to treat ET, some cases resulted in a significant decrease in tremor amplitude [4].

Subjective improvements have been observed with the use of carbidopa/levadopa, dopamine agonists and eldepryl in individuals with gait abnormalities and parkinsonism. Amantadine and buspirone have also been successfully used to treat ataxia, although there is no universally effective treatment for cerebellar ataxia [4]. These medications are unfortunately not tolerated well in ataxia patients [4]. Physical therapy however, can improve strength and gait in patients with ataxia and is typically well tolerated [4].

Cognitive impairment due to FXTAS is treated using dementia pharmaceuticals, traditionally used for Alzheimer’s disease [4]. Aerobic exercise can modify cognitive function in patients with Alzheimer’s disease, which can likely be extrapolated to other neurodegenerative conditions, such as FXTAS [4].

Neuropathic pain is common, specifically in the lower extremities, for both men and women and fibromyalgia pain is common for women with FXTAS [4]. Antidepressants, antiepileptics and topical analgesics have been effectively used as treatment [4]. Peripheral neuropathic pain in the lower extremities can be reduced by the application of a Liboderm patch [4].

There is minimal literature published on physical therapy treatment for FXTAS and best practices have yet to be fully researched and defined [7]. Usually, physical therapy is used to treat individualized symptoms and addresses the functional limitations while sustaining, or even improving, fitness levels [7]. Of significant importance is maintaining strength and preventing falls, due to increasing ataxia and parkinsonism traits [7]. FXTAS manifests itself differently in each person affected, meaning therapeutic intervention is mainly at the individual case level; however, there is evidence to support body-weight-supported treadmill training and exercise in general for reducing depression, anxiety and other behavioural issues [7]. Long term improvements from physical therapy, and more specifically, use of body-weight-supported treadmill training, have been observed in walking speed, cadence and stride length, as well as falls reduction [4].

FXTAS is commonly misdiagnosed as Parkinson’s disease, essential tremor disorder, Alzheimer's disease, dementia, or ataxia of unknown etiology. FXTAS has some similarities in symptoms with other neurodegenerative diseases (which are summarized in the table below), however, FXTAS has an FMR1 gene basis. [4] 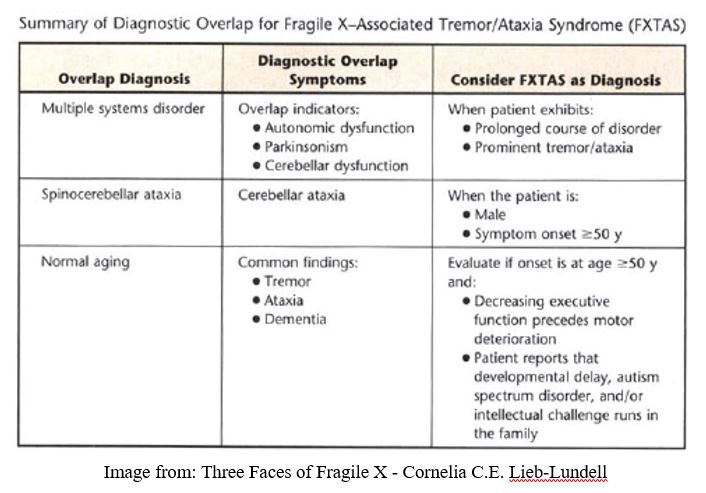 National Fragile X Foundation - has a page dedicated to FXTAS.