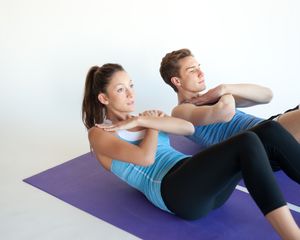 Curl-ups are performed in the crook-lying, supine position, by lifting the head, arms and upper trunk from the floor. Different curl-ups angles affect the abdominal muscles activity.[1]

It is argued that the human spine can only handle a limited number of spine flexion cycles before it leads to  spinal disc herniation, which is concluded from in-vitro studies on animal models. But this statement is criticised as the animal models can’t be compared to the human spine in the natural setting due to the many differences such as:

Spine flexion exercises have significance over the static ones as the spinal motion facilitates nutrients delivery to the intervertebral discs through loading and unloading cycles which is of significant importance as the primary cause of disc degeneration is the age related decrease in the disc nutritional status. Also, flexion-based spinal movements target the rectus abdominis more than other exercises.[2]

To avoid over-stressing the spinal tissues it is recommended that the core strengthening routine does not exceed 60 repetitions of lumbar flexion cycles. For untrained individuals the training should start with a low volume 2 sets of 15 repetitions then progressively increase.

A minimum of 48 hour to 72 hour rest should be allocated between dynamic spinal flexion exercise to allow the spinal tissue, muscles and intervertebral discs to remodel.

Spinal flexion exercise shouldn’t be done until 1 hour of waking up, to decrease the risk of injury.[2]

The activity of the abdominal muscles (rectus abdominis, external oblique and internal oblique) decrease as the curl-up angle increase (moving the body towards the vertical position) due to decrease in the body resistance torque.

The transverses abdominis muscle acts as a corset contributing to the inter-segmental control of the lumbar spine, rather than contributing in trunk flexion.[1]

The speed of the exercise is also an important factor as, the faster the curl-up exercise is performed the higher the muscles' activation level but the lower the motor control level which could lead to increased risk of injury. So it is necessary that the exercise is done at an optimal speed that allows both maximum activation of the abdominal muscles and adequate motor control. Barbado et al.(2015)[3] concluded that for active individuals the fastest cadence is 1 repetition/1 s that could be used but other for other less active populations a slower curl-up speed is recommended to decrease the risk of injury and allow for motor control.[3]