Chronic Ankle Instability (CAI) is one of the residual problems after an ankle sprain injury, specifically Lateral Ankle Sprain (LAS)[1]. CAI is defined as the continuation of the post-injury symptoms such as swelling, impaired strength, instability (occasional giving way), and impaired balance responses for more than 6 months following the initial injury[2].

CAI has many consequences on the ankle structure and function including increased ligamentous laxity, proprioceptive deficits, and activity limitations that affect the execution of activities such as walking or jumping and occupational and sport restriction. These associated problems could persist for decades. Up to 72% of people are unable to return to their original level of function[3] and 85% of people who are diagnosed with CAI develop problems in the contralateral ankle following unilateral ankle sprain[4].

Individuals with functional instability are presented with recurrent ankle sprains and a frequent sensation of instability (giving way). In the examination, the ankle would exhibit normal motion and negative ligaments laxity. In other words, it will be the person with self-reported symptoms such as weakness and pain with feelings that the injured ankle is less functional than the other. The continuous feeling of instability could be attributed to multiple factors such as muscle weakness, muscle recruitment patterns, decreased ankle range of motion, balance deficits, and impaired sensorimotor performance and joint proprioception.

Most patients present with a mixture of mechanical and functional instabilities. There is a wide debate in the literature to differentiate both types based on symptoms and physical examination findings. Postural stability impairments were found in a group diagnosed with FI whether or not MI was present[5]. Another study investigated the peroneal reaction times after inversion perturbation and reported a longer duration in individuals with FI only[6].

The Development of CAI

Meeuwiss et al[7] described an MSK injury as a focal point that when it occurs a series of subsequent events will be triggered. This focal point is influenced by an interaction of intrinsic and extrinsic risk factors. Intrinsic factors such as advanced age, poor neuromuscular control, previous history of trauma, etc. may interact with extrinsic factors in a sports event or a simple daily activity to predispose a person or an athlete to injury. The presence of enough neuromuscular control, flexibility, and strength will protect this person from sustaining an injury. On the other hand, if these factors are not present, the person may be more likely to be injured. If this occurs, the interaction of intrinsic and extrinsic factors again will determine the probability of recovery or re-injury. Understanding this process has great reflections on identifying risk factors and designing rehabilitation programs. 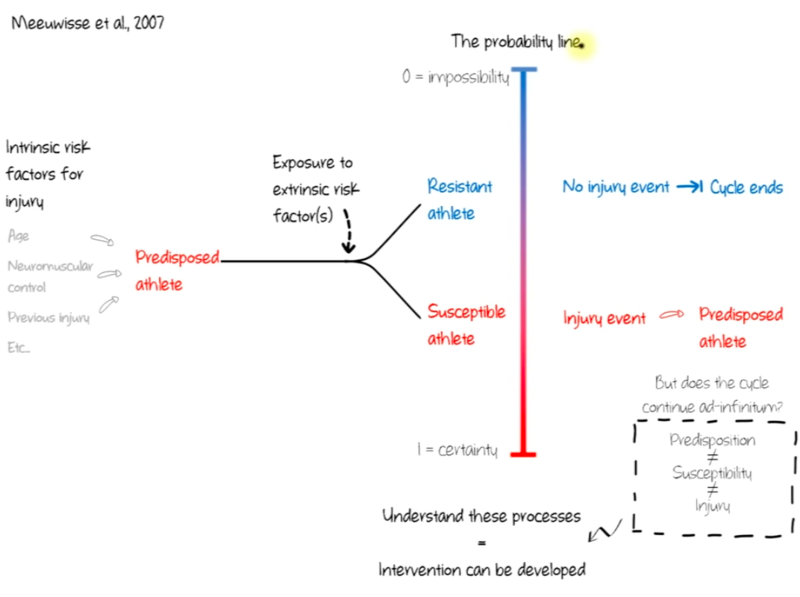 The mechanism of developing CAI following acute ankle sprain has been investigated to identify risk factors and their role in predicting recovery. A recent series of investigations were conducted by Doherty et al to measure specific impairments and functional limitations at two weeks, six months and one year following first time LAS injury. Their analysis presented a number of sensorimotor deficits that could be tested by clinicians to predict the development of CAI. However, the question of whether these deficits were originally present or developed as a consequence of the injury is still not answered.

Damage to the ligamentous structure due to injury has more than anatomical restrictions. It is rather a wide spectrum of symptoms and limitations. It is theorized that structural deficits such as alterations of ligamentous tensile strength cause disruption in afferent-efferent communication leading to central control issues that manifest itself peripherally.

These tests were then repeated six months later and one year after the participants were stratified into two groups: CAI group and ankle sprain copers as classified by the Cumberland Ankle Instability Tool.

According to the results of these studies, Acute Ankle Sprain and Chronic Ankle Instability are associated with the following deficits:

Static Postural Control Deficits: manifested as a coupling between sagittal plane hip movement and frontal plane ankle motion, suggesting a developed hip strategy as a consequence of the injury. This finding is novel in regards to acute LAS but it was previously reported in chronic stages. This Single limb standing test was performed with eyes open and with eyes closed and found that participants relied on the hip-dominant strategy instead of the ankle-dominant strategy for postural control. This led to an increase in range of motion at the hip joint. Thus after a LAS it is difficult for the individual to utilize the different components of the kinetic chain individually and they became 'locked' to provide stability. The researchers also mentioned that they were uncertain if these individuals had this 'locking' pattern before the strain. [8][9][10]

Dynamic Postural Control Deficits: Participants demonstrated reduced hip-knee flexion moment and ankle dorsiflexion in all directions of the SEBT, but the reach distances were reduced in the posterolateral and posteromedial directions only. Interestingly, the deficits presented in the SEBT were noted bilaterally which highlight the hypothesis that LAS is not exclusive to peripheral symptoms but rather have central manifestations as well. These symptoms were present at two weeks, 6 months and one year following the injury[11][12][13].

Deficits in Jumping and Landing Tasks: During landing and jumping tests the following were reported: bilateral increases in hip flexion before initial contact (preparation for landing), reduction in hip flexor moment after initial contact, hip stiffness and bilateral increased extension moments during landing, and inter-limb asymmetries. The increased asymmetry reflects the tendency to off-load the injured limb and shift the load to the non-injured side, this may explain the high susceptibility of contralateral injury[17][18][19][20][21][22].

These deficits were evident at both acute and subacute phases and were then reported in those diagnosed with CAI. This refers to the hypothesis that these deficits are contributing to the development of Chronic Ankle Instability. However, it is still unknown whether these deficits are the reason behind the injury in the first place or they have developed as a result of the injury. Future studies needed to identify LAS risk factors with a follow-up design that allow us to relate these risk factors to the development of CAI or the contribution to recovery.

Based on Doherty et al studies[10][22], clinicians can predict the development of CAI during acute and sub-acute phases following first-time ankle sprain if the following were present[23]:

CAI prevention is important because this condition is common among athletes and less active people and could lead to major limitations and affect their performance. The prevention strategies that will be discussed here are based on four pillars[24]:

The mechanism of ankle sprain injury results in disruption of the ligamentous integrity of the structures preventing excessive inversion and supination (the lateral joint capsule of the ankle and the ligaments supporting the lateral talocrural, subtalar, and distal and proximal tibiofibular joints). Either hypomobility or hypermobility of one or more of these joints will consequently develop.

Hypermobility, ligamentous laxity or mechanical instability is characterized by increased joint play motion resulting in abnormal movement patterns on the instantaneous axis of rotation (IAR) of the joint with physiologic movement. The underlying reason for the increased laxity after ligament sprain or tear is that the healing process wasn't optimal enough to restore the original tension leading to altered proprioceptive input from tissues that are abnormally stressed and forces the needs for compensatory motor patterns. The observed over-pronation or unstable mortise are the results of ligamentous damage[24].

Two ligamentous structures were described as the cruciates of the subtalar joint; the cervical and interosseous ligaments[25]. These two ligaments are believed to be damaged in ankle sprain and the residual laxity following the injury suggests damage of these structures. Since their function is to limit end-range pronation and supination, early loading of injured cervical and interosseous ligaments may compromise the healing process and cause the ligaments to heal in a lengthened position. Therefore, many clinicians recommend constraining pronation by an orthotic device after ankle injury[26] to allow repair at a more optimal length.

Hypomobility, on the other hand, can lead to joint instability by altering the kinetic chain of the lower extremity following LAS. Either physiologic or accessory, hypomobility causes changes in movement patterns leading to abnormal stresses and disrupted proprioceptive input. It is possible to observe hypomobility at the subtalar joint, talocrural joint, distal tibiofibular joint or proximal tibiofibular joint. Limited dorsiflexion is common following LAS, many rehabilitation approaches combine mobilization with movement and ROM exercises to restore ankle dorsiflexion. It may be attributed to gastrocnemius-soleus tightness and/or capsular adhesion. However, accessory motion might be limited but physiological movement is restored via compensatory mechanisms from adjacent structures, for example, a vertical limp during gait can be obtained to maintain forward movement of the lower limb when DF is limited at the talocrural joint.

Subluxation or mal-position of the talus may also be a reason for hypomobility which is defined by Meadows[27] as ‘‘a biomechanical problem with the joint jamming at one end of the range of movement and blocking movement away from that range." It occurs as a result of the excessive inversion resulting in anterior displacement of the talus. If remained in this position, the torn anterior talofibular ligament heals in an elongated position and loses the mechanical integrity that restrains the anterior displacement of the talus. Limited posterior glide is the end product (limited dorsiflexion).

Both hypo and hypermobility should be evaluated and assessed in patients following LAS and those prone to develop CAI and strategies to address both conditions should be integrated in the rehabilitation.

The state of function doesn't necessarily reflect optimal healing at the ankle joint complex following LAS. Therefore, treatment shouldn't be accelerated by the rehab team. Monitoring the load on the affected structures and watching signs of inflammation, helps in preventing overload and abnormal tissue stress.

To prevent consequent CAI, joint stability strategies should be adopted in rehab as well as normalized joint mechanics followed by gradual increase of load. A rehabilitation program designed to tackle the effects of injury on the ankle joint complex may offer promising results in regards to preventing CAI[24]. 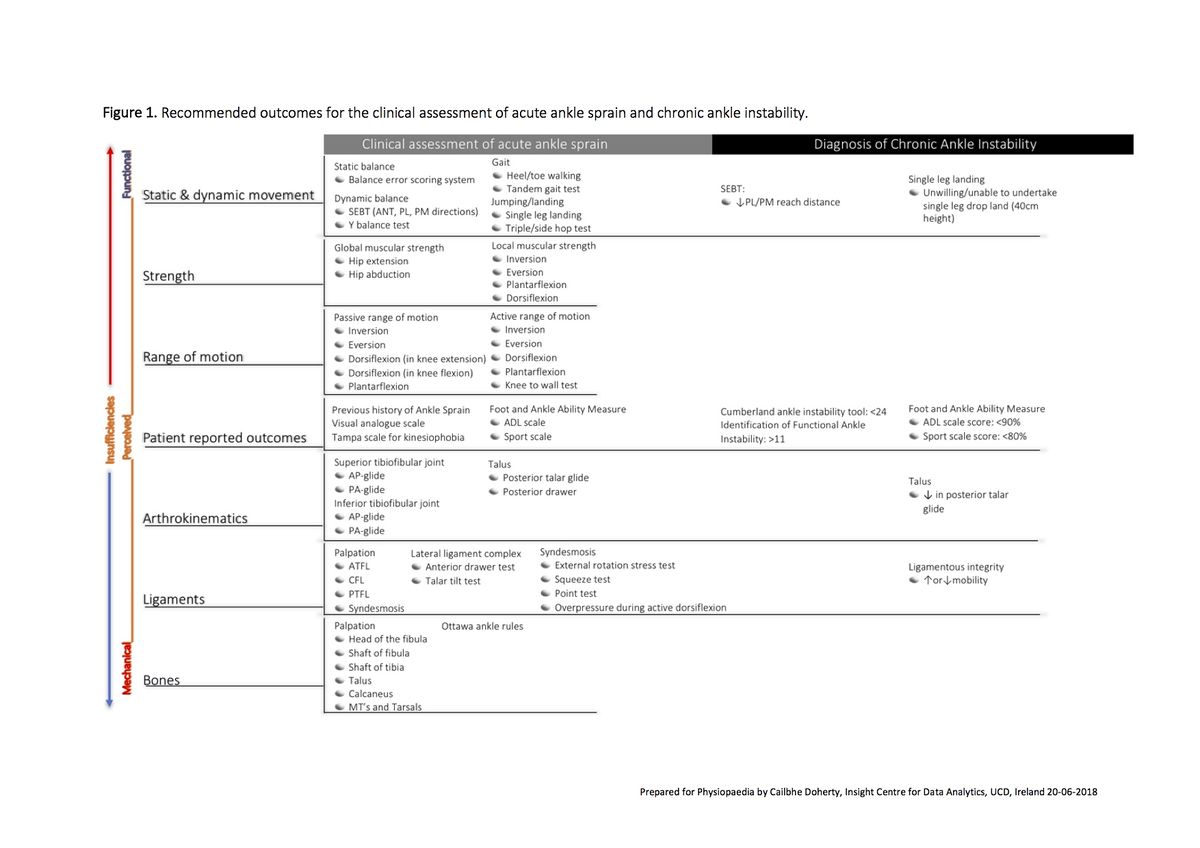