Biomechanics of the Shoulder

Muscles of the shoulder work in team to produce highly coordinated motion. weakness of any muscle change normal kinematic chain of the joint.

on the inferiolateral surface is costal tuberosity attachment for costoclavicular ligament.

The shoulder complex involves 3 physiological joints and one floating joint:

You can also consider the contributions of the sternocostal, vertebrocostal, and sternomanubrium joints when thinking about movement involving the shoulder complex.

The SC joint is the only bony attachment site of the upper extremity to the axial skeleton. The ST joint involves the gliding movement of the scapula along the rib cage during upper extremity movements and does not include a physical bone-to-bone attachment. The GH joint is of particular interest when understanding the mechanism of shoulder injuries because it is osteologically predisposed to instability.[1][2]

The GH joint is comprised of a ball and socket synovial joint, where the head of the humerus (convex surface) articulates with the glenoid fossa (concave surface) of the scapula. Because of the relatively large surface area of the humeral head in relation to the fossa, the joint itself has limited bony congruency, and consequentially heavily depends on surrounds soft tissues for structural support.

Moreover, it is estimated that only 25% of the humeral head articulates with the glenoid fossa at any one time during movements.[3] The surrounding passive structures (the labrum, joint capsule, and ligaments) as well as the active structures (the muscles and associated tendons) work cooperatively in a healthy shoulder to maintain dynamic stability throughout movements.

An area most often involved in the cases of shoulder pain is the subacromial space, which includes the theoretical space between the coracoacromial arch and the head of the humerus.[4][5] More specifically, the subacromial canal lies underneath the acromion, the coracoid process, the AC joint, and the coracoacromial ligament.[6][7] The space itself includes a bursa that provides lubrication for the rotator cuff (RC) tendons, the insertion for the long head of the biceps tendon, and the rotator cuff (RC) tendons themselves.[4][6][7]

The natural arthrokinematics of the GH joint of the shoulder complex during an open-chain movement supports various directional glides of the humeral head within the glenoid fossa.[8][9]

Del Maso and colleagues have estimated that a maximum of 7.5 mm of upward translation of the humeral head may occur during range of motion movements,[9] which is not an insignificant amount of migration for a large bony structure to experience within a compact space during a dynamic task. The success of a coordinated movement of the humeral head with normalized arthrokinematics, avoiding an impingement situation, requires the harmonious co-contraction of the RC tendons. Abnormal glenohumeral translations have been linked to pathological shoulders and it has been suggested to be a contributing factor for shoulder pain and discomfort, and may also lead to the damage of encompassing structures.[9][10]

As illustrated by the force-vectors of their respected moment arms, the RC tendons collectively have been accredited with the compression of the humeral head within the glenoid fossa during movements.[11] The supraspinatus muscle initiates the abduction movement of the arm by pulling the humeral head medially towards the glenoid cavity thereby creating a fulcrum for movement.[12]

An imbalance in the neural activation of any one of the RC muscles could easily cause a misalignment of the humeral head thus giving rise to an impingement of the subacromial structures during movement. Both the superior and anterior translation of the humeral head during movements are the leading biomechanical causes for impingement syndrome.[14]

The AC joint is a diarthrodial and synovial joint. It allows for axial rotations and antero-posterior glides. Because there are not direct attachements of muscles to the joint, all movements are passive and initiated by movements at other joints (such as the ST joint).

The movement of the scapula along the thoracic cage also directly influences the biomechanics of the shoulder complex as a whole, and can moreover predispose the development of impingement syndrome. The healthy movement of the scapula along the thorax during arm elevation includes protraction, posterior tilting, and lateral rotation, depending on the plane of movement (Figure 1).[15][16][17][18] 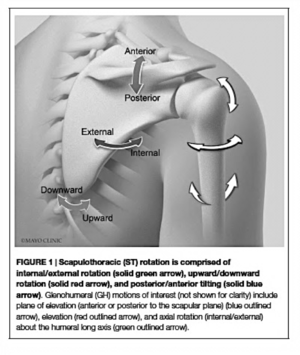 Although posterior tilting is generally understood as primarily an acromioclavicular joint motion, the tilting that occurs at the scapula during arm elevation is crucial in order to minimize the encroachment of soft tissues passing under the acromial arch.[18] The normal contribution of the ST joint is generally expressed as the ratio of ST movement with regards to that occurring simultaneously at the GH articulation. The scapulohumeral rhythm is quantified by dividing the total amount of shoulder elevation (humerothoracic) by the scapular upward rotation (scapulothoracic).[15] Within the scientific literature, the scapulohumeral rhythm is generally accepted to be 2:1, which represents 2° of humeral elevation for every degree of scapular upward rotation.[16][19][20]

The stability of the ST joint relies on the coordinated activity of the 18 muscles that directly attach to the scapula.[21] The scapular muscles must dynamically control the positioning of the glenoid so that the humeral head remains centered and permits arm movement to occur. When weakness or neuromuscular dysfunction of the scapular musculature is present, normal scapular arthrokinematics become altered,[20] and ultimately predisposes an individual to an injury of the GH joint.[19][20][21]

The pathological kinematics of the ST joint include, but are not limited to:[22][23][24]

These movement alterations are believed to increase the proximity of the rotator cuff tendons to the coracoacromial arch or glenoid rim,[18][25] however, there are still points of contention as to how the movement pattern deviations directly contribute to the reduction of the subacromial space.[18]

The neuromuscular control of the scapula relies on the balanced team-work between the global movers and the fine-tuning stabilizing muscles of the shoulder complex. Again, because of the floating nature of the scapula along the thorax, it too, must rely on the kinship between the cortical direction provided by the nervous system and the resulting action of the MSK system. We can therefore affirm, that the shoulder complex is among the most kinematically complex regions of the human body,[25] and requires a high level of neuromuscular stability throughout movement. The neuromuscular control of the shoulder also requires a well-developed sense of motor control and proprioception.

During right arm flexion: The upper thoracic vertebrae right side flexes, right rotates and extends. The first and second ribs descend, while the 4-6th ascend and the 3rd acts as an axis.

The static structures of the shoulder complex, which includes the labrum (a fibrocartilaginous ring), the capsule, cartilage, ligaments, and fascia collectively act as the physical restraints to the osseous matter and provides a deepening effect to the shallow glenoid fossa.[28] 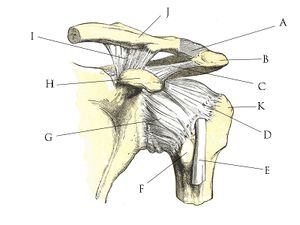 Further to their passive stabilization role, they also provide additional protection via the various mechanoreceptors embedded within their fibers. Mechanoreceptors can be understood as the neural sensors that provide afferent input to the central nervous system for motor processing and descending motor commands for the execution of movements.[29][30][31]

Mechanoreceptors are characterized by their specialized nerve endings that are sensitive to the mechanical deformations of tissues,[32][33][34] and therefore contribute to the modulation of motor responses of the adjacent muscles. Mechanotendinous receptors (muscle spindles and golgi tendon organs), capsuloligamentous receptors (ruffini and pacinian corpuscles) as well as cutaneous receptors (meissner, merkel and free nerve endings) are responsible for our sense of touch, vibration, proprioceptive positioning, as well as provide the feedback regarding muscle length, tension, orientation, further to the speed and strength of the contractions of the muscle fibers.[35]

It is clear that the passive structures of the shoulder provide a neurological protection mechanism through feed forward and feed back input, that directly mediates reflex musculature stabilization about the glenohumeral joint.[30]

Further to the intricate network of passive ligatures that conjoin adjacent bones, the importance of the surrounding musculature cannot be overstated. Active muscle contractions are essential for maintaining the stability of the shoulder complex.[1] 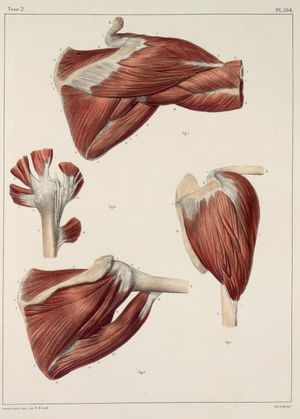 The musculature of the shoulder region can be subdivided into the global movers of the shoulder and the fine-tuning stabilizers of the individual articulations. The larger muscles such as the trapezius, the levator scapula, the pectorali, the deltoids, the serratus anterior, the latissimus dorsi, the rhomboids, the teres major, the biceps, the coracobrachialis, and triceps muscles are responsible for various synergistic activities during shoulder movements. Conjointly as agonist and antagonist couplings, they allow for the gross motor movements of the upper quadrant. More specifically to the GH joint, the fine-tuning stabilizers are just as important to the shoulder complex as the global movers for coordinated and smooth shoulder movements.

The stabilizing muscles of the GH articulation, the supraspinatus, subscapularis, infraspinatus, and teres minor,are often summarized as the rotator cuff (RC) complex, and attach to the humeral head within the glenoid fossa. Collectively, they act as the dynamic stabilizers of the GH joint by maintaining a centralized positioning of the humeral head within the glenoid fossa,[36][37] in both static and dynamic conditions. It has been suggested that the tendons of the rotator cuff muscles blend with the ligaments and the glenoid labrum at their respected sites of attachments, so that the muscle contractions can provide additional stability by tightening the static structures during movement.[38] 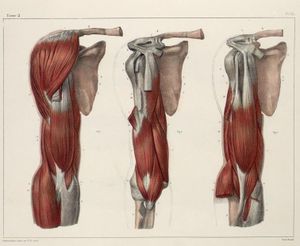 The synchronized contractions of the RC muscles must maintain the centralized positioning of the humeral head during movements in order to avoid the physical encroachment of tissues, predominantly anteriorly or superiorly to the GH joint, which has been linked to injury and pain amongst the shoulder region. As previously noted, due to the anatomical passage of the common RC tendon within the subacromial space, the RC tendons are particularly vulnerable to compression, abnormal friction, and ultimately an impingement (pinching) during active tasks.[4][5] Proper alignment of the glenohumeral head is important for the healthy engagement of the shoulder joint in activities of daily living.