Tarsal coalition is a congenital problem that does not manifest until early adolescence, most commonly primary due to failure of mesenchymal separation.A common abnormality of the hindfoot skeleton that only rarely leads to symptoms. These symptoms occur most commonly in adolescence but rarely can be found also in adults. it can present as osseous (synostosis), fibrous (syndesmosis), or cartilaginous (synchondrosis) connections between the tarsal bones.[1]

The coalition is abnormal connection of two or more bones in the foot, most commonly the calcenous and navicular or the Talus and calcaneus. This union may be fibrous, cartilaginous, or bony, and the connection of the bones can result in as severe, rigid flat foot. It is due to failure of separation of the involved bones during development[2] 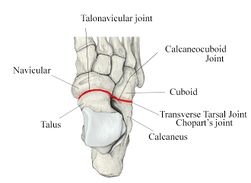 In young children the coalition between the bones is cartilaginous which allows motion that is normal or, if restricted is functional. During adolescence the coalition begins to ossify and may become a complete or incomplete bony bridge. As ossification proceeds, motion between bones decreases and may become entirely restricted. When hind foot motion is restricted, a twisting injury whose force might otherwise be dissipated through the several hind foot joints may instead concentrate its action, leading to an inversion sprain. Tarsal coalition has been shown to be associated with a high incidence of ankle sprains in adolescent athletes [3],

Adolescent present with the insidious onset of hind foot pain with or without recurrent ankle sprains. Some complain of stiffness in the hind foot. The pain is usually described as coming from the lateral side of the hind foot and ankle. Not only adolescents but older athletes as well may develop symptoms from a tarsal coalition. If there has been incomplete ossification of the coalition, hind foot motion may be sufficiently satisfactory to allow normal foot function into adulthood. A twisting injury may then stretch, tear, or otherwise disrupt the coalition, causing the coalition itself to become painful. This pain is often initially diagnosed as an ankle sprain, although it is not alleviated with the usual therapies. All patients with tarsal coalition have the key finding of absent or diminished subtalar motion. The hindfoot cannot to be everted or inverted when holding the ankle in the neutral position[2]

Radiographs should be obtained, including AP, lateral, and oblique views of the foot . A calcaneonavicular coalition can usually be seen on the oblique view. A talocalcaneal coalition usually involves the middle facet of the subtalar joint which is near the sustentaculum tali. This condition is sometimes difficult to appreciate on standard radiographic views, and Broden views or computed tomography (CT) scanning of the subtalar joint is necessary[4]

An important finding on routine radiographs that should alert the observer to the possibility of a tarsal coalition is a dorsal beak on the neck of the talus.This beak, which represents a talonavicular traction spur, is indicative of increased stress at that joint. The presence of this beak does not indicate that arthritis or adaptive changes have occurred in the hindfoot,[5]

An initial course of immobilization in a short-leg walking cast can be tried for 3 to 6 weeks, which allows the irritation and inflammation to resolve and the child to resume athletics . Should this trial be successful, taping the ankle and hindfoot or the use of an ankle brace should be encouraged if the patient wishes to continue with sports activities.[6]

Excellent results have been obtained with surgical excision of both calcaneonavicular and subtalar coalitions, even in the presence of a significant talar beak

Should excision of the coalition not be successful, arthrodesis can be subsequently performed. Subtalar coalitions involve the middle facet and arise just above the sustentaculum tali. They are approached through a medial hindfoot incision. Calcaneonavicular coalitions occur in the anterior part of the sinus tarsi and are approached laterally .[3]

The patient kept non-weight-bearing, with the splint worn for 10 to 14 days, at the end of which time the skin sutures are removed. The patient continues on crutches, non weight-bearing, for 6 weeks after the surgery .Range of motion exercises are started when the sutures are removed. Return to activity usually occurs at approximately 2 to 3 months.

Postoperative Management  lateral (Excision of Calcaneonavicular Coalition) The patient is kept non-weight-bearing for 6 weeks. After suture removal at 10 to 14 days, range-of-momotion exercises are started. Activity is advanced as tolerated, after resumption of weight-bearing.