This article is currently under review and may not be up to date. Please come back soon to see the finished work! (22/11/2019) 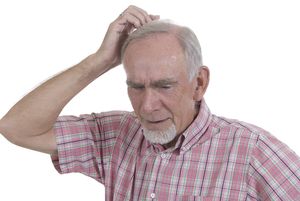 Sundowning also known as sundown syndrome or late day confusion,[1] is a neurological condition that describes confusion and restlessness that occurs in the late afternoon or early evening in patients with Alzheimer's Disease and other forms of Dementia[2]. The symptoms can differ between individuals but often include:

Although it is more common in people with Dementia it can be seen in older people who do not have Dementia[3], Symptoms tend to appear as the sun is setting and can last into the night but by morning they have usually disappeared..[4][5][6]

Some evidence indicates that sundowning behaviors tend to increase due to disruption of circadian rhythm, although the causes have not been proven objectively. In humans, a biochemical cascade is triggered as the sun sets which results in a reduction in the dopamine levels and an increase in melatonin production as the body goes to sleep. The opposite is the case in people with Dementia, the production of melatonin may be decreased,[1] which may interrupt other neurotransmitter systems. Also, a disruption within the suprachiasmatic nucleus (SCN) may occur due to the development of plaques and tangles that is associated with Alzheimer's disease.[6] The suprachiasmatic nucleus regulates sleep patterns by maintaining circadian rhythms, which are strongly associated with external light and dark cues. The kind of confusion that are mostly seen in sundown syndrome can be linked to the disruption that occurs within the suprachiasmatic nucleus . However, finding evidence to back this up is arduous, because an autopsy is needed to definitively diagnose Alzheimer's in a patient. Once an Alzheimer's patient has died, they have usually surpassed the level of dementia and brain damage that would be associated with sundowning. This hypothesis is, however, supported by the efficacy of melatonin, to decrease behavioral symptoms associated with sundown syndrome.

Different symptoms of sundowning have been identified, they include: