Somatic symptom disorder (SSD), as defined by the DSM-V code, occurs in individuals experiencing exaggerated and disrupted physical symptoms in multiple areas of the body, accompanied by exaggerated thoughts impairing activities of daily living. Diagnosis of SSD requires that the individual has experienced these symptoms for at least six months. This disorder has recently been updated from DSM-IV code of "somatization disorder" to the DSM-V code of "SSD". The prior diagnosis required patient complaints from four different symptom groups; however, this is no longer required with the DSM-V code. In addition, patients experiencing these symptoms associated with other comorbidities such as heart disease, osteoarthritis, or cancer were previously excluded from the DSM-IV diagnostic code. The DSM-V definition now includes these patients under the diagnostic code of SSD, even if the psychological symptoms were secondary to the primary diagnosis. These patients are considered appropriate for psychological treatment; however, a full psychological evaluation is needed to rule out other possible disorders.

The DSM-V code has been implemented for a variety of reasons:

If you need additional clarification on the description of Somatic Symptom Disorder and the recent changes in DSM-V, you can check out the video: www.gmeded.com/dsm-5/somatic-symptoms-and-related-disorders-dsm-5

Information about the prevalence of SSD is lacking due to the recent changes in the DSM-V code in 2013. The prevalence of the DSM-IV code of somatization disorder is more widely known and the following data has been obtained:

Statistical prevalence on the prior DSM-IV code is inaccurate do to the confusing description of the disoder; therefore, non-psychiatric physicians have rarely diagnosed somatoform disorders. In addition, psychiatric physicians used ambiguous terminology in diagnosis of patients with this disorder. Lack of consensus among the medical community has lead to inaccurate prevalence statistics. Despite the frequency encountered in clinics and studies in medical studies, prevalence among Anthem Blue Cross insured individuals was 0.00002 out of 28 million subscribers and appeared rarely in the medical databases of Medicare, Medicaid and Veteran's Administration. Creation of the new DSM-V code is attempting to provide a straightforward and simplified definition of the disorder so that medical professionals are able to effectively communicate the medical diagnosis of SSD[1].

B. Excessive thoughts, feelings and behaviors related to these somatic symptoms or associated health concerns: At least two of the following are needed to meet this criterion:

C. Chronicity: the state of being somatic last > 6 months

Patients with SSD, with have one of the following as a dominate symptoms: somatic complaints, health anxiety, and pain.[5] 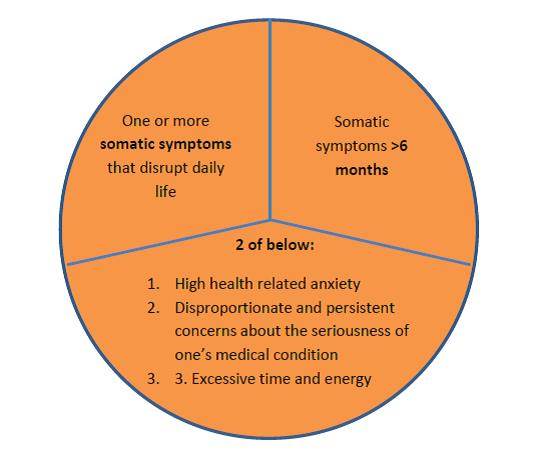 Symptoms a patient may present with include:

Currently, higher percentages of SSD has been found in persons with:

Pharmacological treatment for Somatic Symptom Disorder is not widely accepted and is not the preferred course of treatment. Reasons a patient with SSD would be prescribed medication if comorbidities such as depression and anxiety were also present. These comorbidities may make SSD harder to treat and resolve. The following may be prescribed or used to help control depression and anxiety and aid in the treatment of SSD.

Criteria for SSD as defined by the American Psychiatric Assocation (APA):

The diagnostic criteria for SSD focuses not only on somatic symptoms but also on psychological responses, including the patient's emotions, thinking and behavior of their symptoms. The severity of SSD can also be diagnosed as mild, moderate or severe. Diagnosis may or may not include another diagnosed medical conditions. Medically unexplained symptoms are no longer included in the diagnostic criteria and are discouraged. Describing the patients symptoms as medically unexplained is inaccurate because oftentimes symptoms are unexamined. In addition, patients suffering from somatic complaints may feel that medical professionals view their symptoms as inauthentic[1].

There is not adequate evidence for the cause of SSD.Somatic symptoms are both medically explained and medically unexplained. With the recent changes in the DSM-V, Somatic Symptom Disorder includes both; therefore, somatic symptoms can have musculoskeletal, visceral, neurological and or psychological origin. [10]

Patients diagnosed with the DSM-V disoder may present with the following systemic symptoms:

The components of SSD currently treated include the following:

Treatments used as interventions for these components include:

Data from the study by Allen et al suggests that a "10-session CBP produces improvements in somatization symptoms and functioning over and above those obtained from PCI, the only established treatment for [somatization disorder]"[13].

Physical therapy should be patient-specific and include manual therapy and/or manipulation.

Goals for the Physical Therapist or Clinician

If you feel it is necessary to avoid or terminate the therapist-patient relationship the following approaches are recommended:

Outcome measures that are available include the following:

Disorders likely to be misdiagnosed as somatic symptom disorders: 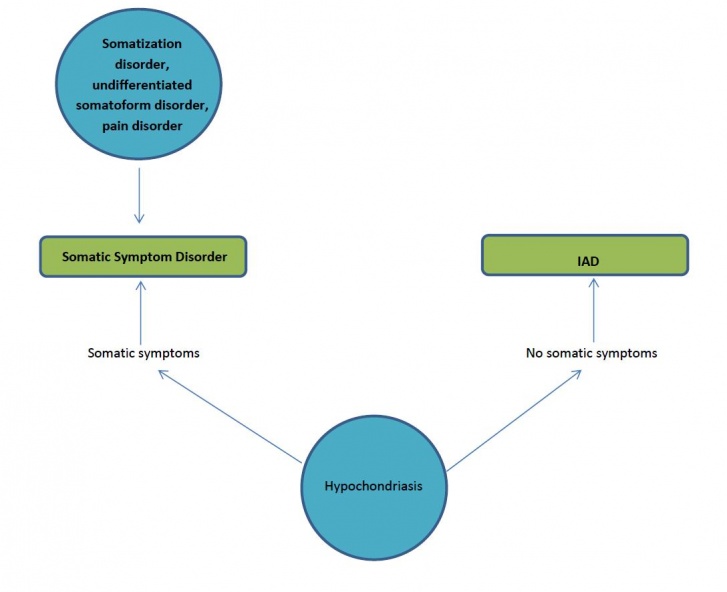