The shoulder comprises of glenohumeral joint, scapulothoracic joint, sternoclavicular joint, and acromioclavicular joint. Hence the mobilisation of all four joints is covered. 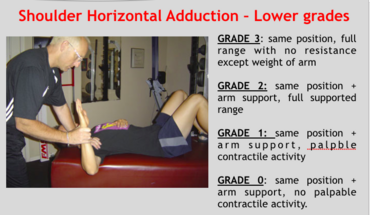 Manual therapy interventions for the shoulder have been associated with improvements in pain and function in individuals with :

Below are some of the techniques at our disposal.

The head of the humerus is convex and the glenoid fossa is concave.

The treatment plane is along the glenoid fossa and moves with the scapula as it moves in rotation.

Distraction is usually applied during initial treatment to reduce pain and general mobility.

Position of the patient[edit | edit source]

The patient is in a supine lying position and the shoulder is in a resting position.

The therapist's hand is placed in the axilla with the thumb distal to the joint margin anteriorly and fingers posteriorly.

The other hand supports the lateral part of the humerus.

The therapist moves the hand in the axilla laterally to distract the humerus. Distraction is sustained for a few seconds.

To increase abduction or correct the humerus positional fault if it is superior to normal.

Supine lying and the arm in the loose pack position. The therapist supports the arm between the trunk and the elbow.

The therapist's other hand(webspace) is kept just below the acromion process.

The force is applied on the head of the humerus in the inferior direction, through the hand which is placed superiorly.

To improve flexion and internal rotation of the shoulder

Supine lying while keeping the arm in resting position.

Position of the therapist and hand placement[edit | edit source]

The therapist stands with the back towards the patient, in between the arm and the trunk.

The distal aspect of the arm is grasped against the trunk of the therapist to give grade one distraction to the shoulder joint.

Another hand is placed over the joint (distal to anterior margin) to provide the mobilizing force.

The head of the humerus is glided posteriorly.

The scapula is supported by placing a towel roll beneath it.

The therapist places one hand over the proximal humerus for applying grade 1 distraction.

Another hand is placed over the elbow joint.

The therapist places around the pelvis to distract the humerus.

The glide is applied on the humerus in the posterior direction by pushing the elbow along the long axis of the humerus.

To increase the extension of the shoulder with external rotation.

Position of the patient[edit | edit source]

Prone lying at the edge of the plinth, the limb is in resting position. Acromion is stabilized by placing the towel underneath.

Position of the therapist with hand placement[edit | edit source]

The patient's arm is supported on the therapist's thigh and the therapist stands on the top of the table and places one hand over the arm to give distraction at GH joint.

Mobilizing hand's ulnar border is placed just next to the posterior angle of the acromion.

It is applied to the humeral head in the anterior direction.