Skin is a cutaneous membrane which covers the surface of the  body. It is the largest organ of the body in  terms of weight and surface area.

When treating a burns patient the knowledge of tissue healing is beneficial to the patient and to the possible outcomes. Your knowledge of tissue healing combined with the information gathered from your assessment will influence the decision of when to rest, exercise, stretch and to what level to strengthen during the recovery period. Please note that these timescales are variable according to the size of the burn, surgical intervention and any other complicating factors.  Clinical reasoning is essential when applying the following in practice. 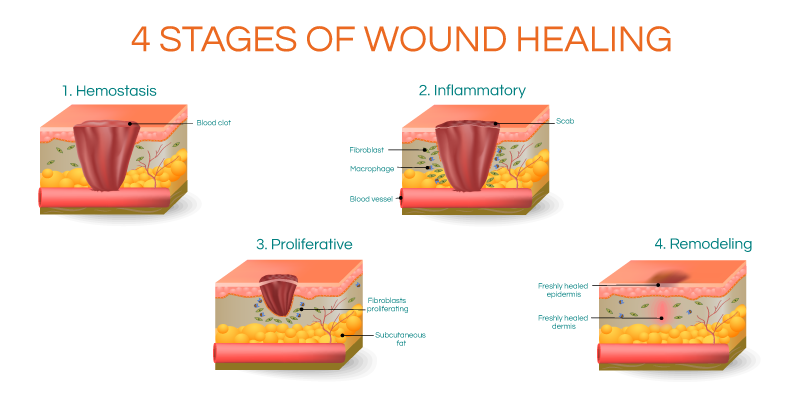 Figure 2. The 4 Stages of Wound Healing

For more information on the Healing Process, the following two pages are available to read:

In severe burn injury, >30% TBSA complex reaction occurs both from the burn area and in the area distant to the burn. Cytokines, chemokines and other inflammatory mediators are released in excess resulting in extensive inflammatory reactions within a few hours of injury. The initial response depending on the size of the burn injury is similar to the inflammation that is triggered after tissue destruction such as trauma or major surgery.

Different factors contribute to the magnitude of the host response, they include:

This inflammatory response leads to rapid oedema formation This is caused by:

These reactions are due to the direct heat effect on the microvasculature and to the chemical mediators of inflammation. Vasodilation and increased venous permeability at the early stage of the injury are caused by the release of histamine. Also, prostaglandin is released by damage to the cell membranes which causes the release of oxygen-free radicals released from polymorphonuclear leucocytes which activate the enzymes catalyzing the hydrolysis of prostaglandin precursor. These hemodynamic changes lead to continuous loss of fluid from the blood circulation causing increased haematocrit levels and a rapid fall in plasma volume, leading to a decrease in cardiac output and hypoperfusion on the cellular level.

In addition to the local effects of a burn, a severe burn injury has an effect on different organs and systems in the body. The effects include:

The essence of burn shock is the rapid and extensive fluid transfer in burn and non-burn tissues (6). After severe burns, the local and systemic vascular permeability increase, causing intravascular fluid extravasation, leading to a progressive decrease in effective circulation volume, an increase in systemic vascular resistance, a decrease in cardiac output, peripheral tissue edema, multiple organ failure, and even death (7,8). The increase in vascular permeability is characterized as a significant change in the permeability of capillaries and post-capillary venules. In other words, the normal physiological barrier function of endothelial cells (ECs) is destroyed

The effect of burns on respitation is mainly attributed to the following three complications:

Early kidney injury is due to:

The renal system complications are caused by the alterations in the cardiovascular system. Blood flow to the kidneys is decreased due to hypervolemia and decreased cardiac output. This marks the beginning of kidney failure. This can be prevented by conducting an accurate assessment for the correct fluid recusitation to be administered. The rehabilitation team should always keep an eye out for decreased urine output as this is an early sign of renal compromise.

Trauma can affect the HPA Axis (Hypothalamic-pituitary-adrenal axis), which controls the interaction between the hypothalamus, pituitary gland, and adrenal glands. The hypothalamus and pituitary gland are located just above the brainstem, while the adrenal glands are found on top of the kidneys. Firstly, due to the burn injury, individuals commonly have an elevated sympathetic drive. This is due to an increase in the release of cortisol and glucagon. These hormones effect the metabolic system, mentioned below. Prolonged excess cortisol can result in hypercortisolemia. Which is associated with infection rates in post burn patients and lengthened durations of severe infection. Secondly, oxytocin production is decreased, which is associated with empathy and love. This can cause long term side effects emotionally for the individual.

The metabolic state is initially suppressed by the effects of acute shock. Initial effects to the body following a burn can cause:

Hypermetabolism begins approximately five days post burn. Hypermetabolism is when the basal metabolic rate increases up to three times its original rate. The cause of hypermetabolism is not entirely defined and appears very complex and is most likely activated and sustained by stress induced hormonal releases and inflammation. The decreased perfusion among the organs in the abdominal cavity, necessitates early and aggressive enteral feeding to decrease catabolism and maintain gut integrity. It causes muscle wasting, mucosal atrophy, reduced absorptive capacity, and increased surface permeability. Effects can be seen for up to two years post burn.

Catabolism occurs when food is digested and the large, complex molecules in the body are broken down into smaller, simple ones to be used as energy.

As mentioned above, following a burn injury, individuals commonly have an elevated sympathetic drive, causing the release of cortisol. Prolonged excess cortisol can result in hypercortisolemia, which is associated with infection rates in post burn patients and lengthened durations of severe infection.

Patients also suffer from a high risk of  infection while wounds are open.

A burn wound causes an increased inflammatory response. Blood tests show an increased level of CRP (C-reactive protein) following a burn injury. This protein is made by the liver and assists the inflammation process. CRP causes increased inflammaorty symptoms of When body tissues are burned, histamine is released from mast cells, act on ECs, fibroblasts, and smooth muscle cell tissues, exert a strong vasodilator effect, and can significantly increase the permeability of microvascular endothelium

Why do burns increased capillary permeability?

The major reasons for this systemic microvascular leakage in burns include an increase in vascular permeability triggered by inflammatory mediators and the increase of vascular hydrostatic pressure caused by vessel dilation.

, 11 The upregulation of catecholamines and other catabolic agents, such as glucagon, and cortisol, induce a hyperdynamic cardiovascular response, and increased oxygen consumption.

1Harrison TS, Seaton JF, Feller I. Relationship of increased oxygen consumption to catecholamine excretion in thermal burns. Ann Surg. 1967;165:169–72.3 This response is unparalleled to any other forms of injury. While derangements in pulmonary and systemic physiology are known and well described in the literature12,