A questionnaire of shoulder pain and function. it was devised in 1996 (Dawson, Fitzpatrick, & Carr, 1996) for assessing the outcomes of shoulder surgery and later was used for degenerative conditions (excluding conditions of shoulder instability[1].

The OSS was designed to assess the outcome of all shoulder surgeries with the exception of instability surgery. 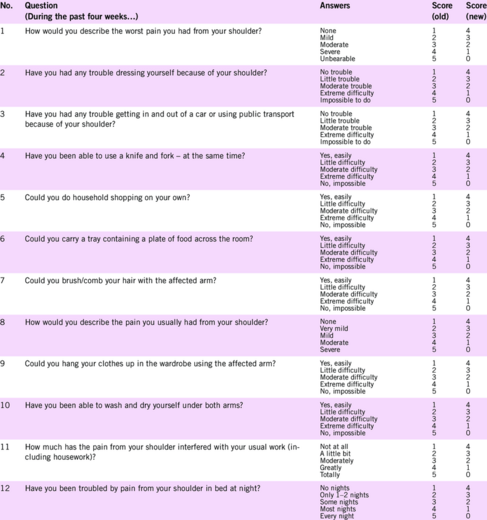 It contains 12 items, each with 5 answers. starting with 1 (best/fewest symptoms) to 5 (worst/most severe) which is awarded to correspond to the patient's symptoms. The total gives a minimum score of 12 and a maximum of 60. A higher score implies a greater degree of disability.

In 2009 the scoring method for the OSS was modified so that each of the 12 items is scored from 4 (best/fewest symptoms) to 0 (worst/most severe) [2].

The total score ranges from 48 to 0, after the modification of the score in 2009, a lower score indicates a greater degree of disability.

the score was found to have a great interrater reliability and test-retest reliability[1].

Evidence suggested the validity of OSS to measure the degree of disability and detect the possible outcomes of shoulder surgery [1].

it was stated that the sensitivity of the OSS can detect the smallest of changes that might happen in response to treatment interventions.[1]